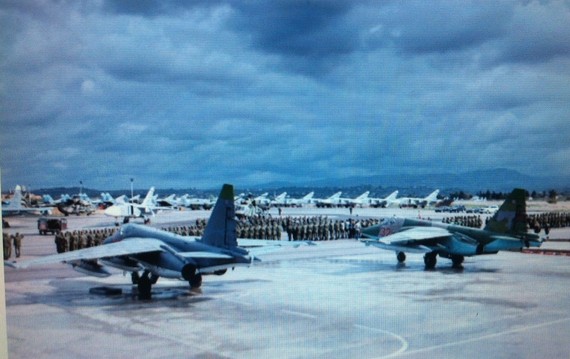 Two things about Russia under President Vladimir Putin: First, never bet too heavily on what the former KGB strongman will do next; second, things are not always what they first appear to be.

Only two weeks ago, I remarked that Russia would not withdraw from Syria till a political settlement regarding Syria's future was achieved to Putin's satisfaction, regardless of what his ally, beleaguered Syrian President Bashar al-Assad, might wish. While I stand by what I said, I was surprised at Mr. Putin's sudden announced withdrawal a couple of days afterward.

Checking my sources reveals more than initially meets the eye: My analysis suggests Russia's sudden move amounts to more of a drawdown than a withdrawal because, despite news bulletins to the contrary, Putin yet maintains a certain military presence in Syria. Intelligence imagery indicates the Russian Sukhoi Su-24M bomber aircraft group is still largely in place.

Reason: Russia wants to ensure that the political outcome, whatever form or shape it may be, at least supports some of its long-term objectives. Equally important, an analysis of the imagery shows Russia is not only still expanding infrastructure and facilities around its Latakia naval base but also has deployed additional assets in the past several days.

Yes, Mr. Putin caught us all by surprise with his announced Syrian drawdown. Little wonder: Syria-led coalition forces had some momentum behind them; they were on a roll, gaining ground sometimes even without a fight. But make no mistake: This partial withdrawal does not mean that things are settled militarily. The city of Aleppo remains partially encircled by jihad forces who in turn are encircled by coalition forces headed by the Syrian regime. The objective: cut the jihadists' supply lines.

The question now becomes: What does Russia's drawdown mean for Syria, the Middle East and geopolitics in general? Some points to consider:

First, the unexpected reduction in forces hardly suggests Russia's involvement in Syria is done. To the contrary, Russian aircraft remain. These are not part of the drawdown. Their mission is to attack insurgents not included in the most recent ceasefire, principally Jabhat al-Nusra (another name for al-Qaida) and the Islamic State. To quote a Russian military journalist: "The fleet remains; antiaircraft systems remain; the tanks remain; all the marines remain; the helicopters remain; some of the aircraft will remain. Only some of the aircraft and their service personnel are being taken out. And they can come back, of course, in the space of three or four hours."

Second, it's conceivable to view the drawdown as an excuse for maintenance of Russian aircraft after an intensive period of sorties. It's also plausible this marks a shift in tempo aimed at metastasizing politics: pausing in what one might see as Russia's spiraling down unknown, unfamiliar and possibly perilous paths -- something this column has regularly highlighted.

U.S. Secretary of State John Kerry is just now wrapping up a Moscow meeting with President Putin, an affair with far fewer tensions than recent years have seen between the Obama administration and Russian leaders. In fact, before discussions on expanding access to humanitarian aid and maintaining the Syrian ceasefire even began, Putin uncharacteristically kidded Kerry about his carrying his own luggage.

One assumption is that Mr. Putin's drawdown, coinciding with the start of Geneva talks between representatives of the Syrian regime and rebels, was not aimed at the Geneva talks but instead was intended to push the Obama administration into genuine cooperation with Russia. Recall that President Putin stated from the outset his intervention in Syria had limited objectives -- to "create conditions for a political compromise." Perhaps he is now moving toward that goal.

Another salient point that continues to intrigue analysts: Russia's drawdown will put pressure to act on both parties (Syrian regime and opposition groups) at the Geneva talks. The kicker: The burden is also on the United States to stop its own allies -- Turkey, Saudi Arabia and Qatar -- from providing funding to and arming their proxies or even marching defiantly toward Damascus.

While the United States might be able to convince Saudi Arabia and Qatar, it will find Turkey a significant challenge given that its president, Recep Tayyip Erdogan, needs the Syrian conflict to drag on longer in order to keep his hold on power. You do not have to look far to see how Turkey is using the issue of Syrian immigrants to blackmail Europe to secure money and gain European Union membership. Shame on Turkey, a Muslim country that calls itself a secular and democratic state.

If history is any indication, this would not be the first time Mr. Putin has used a military drawdown to resolve a deadlocked political scene such as the one in Syria. It's something we saw in the lead-up to the Minsk accords concerning Ukraine. Make no mistake: Russia's political elites, including Mr. Putin, do not at this time seek a direct confrontation with NATO or the West over either Ukraine or Syria.

Where from here? Against all odds, Iran, Russia and the United States want to see a strong Syria emerge at the end. After all, Syria does have an identity. It's a proud and ancient nation. And some sort of long-sought resolution could not come at a more critical time when fundamental borders and governments throughout the Middle East are eroding, giving way to more violence, floods of refugees and the uncontrollable emergence of sectarian tension along religious lines.

Whatever the outcome, Russia's latest move -- and the rush by the United States to react to this drawdown -- is not just about Syria but rather the future of the global order or what these days passes for it.