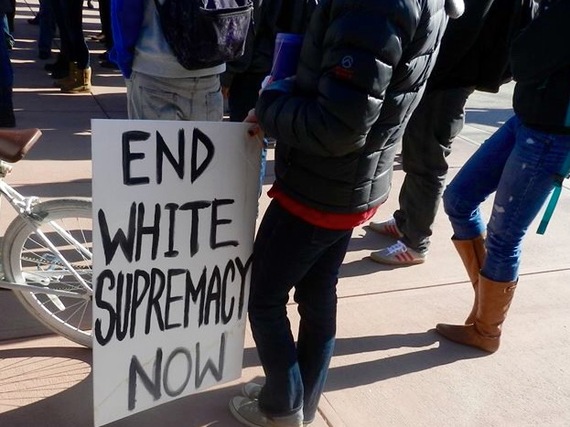 I often run into white people on social media who complain my style is too confrontational, and subsequently I'll scare good-intentioned white people away from considering their role in our system of white supremacy and joining the ranks of those who fight against it. Indeed, those two words are a real sticking point with a lot of people.

These words mean something. They are not prima facie references to the Klan, Nazis, neo-Nazis, or any other white terrorist hate group. In fact, these groups are only a small manifestation of what those two words come together to mean--and today, perhaps even one of the less significant ones.

Yet almost every time I publicly use those two words--accurately--white people get upset. Someone inevitably tells me to say "white privilege" instead of "white supremacy," because people wrongly associate the latter only with the KKK and hearing it scares them off. To those people I always have the same answer, and again reiterate, NO. These terms don't mean the same thing and should not be conflated.

So let's clear up the difference between the two.

White supremacy refers to a racial hierarchy in which whiteness sits atop of. The United States was founded on a system--legally, culturally, economically, and politically--of white male upper class supremacy. All of these remain today.

Each can be confirmed through a number of outcomes and measurements--wage gaps, employment gaps, cultural influence, political power, economic power, incarceration rates, sentencing disparities... and on and on. Those arguments don't need to be made here. These are established facts.

So when I say something about white supremacy, this system of racial hierarchy is what I'm referring to. You can see that the Klan and Nazis have little to do with this system. In fact, every member of white supremacist terrorist organizations could fall off the face of the earth tomorrow (a guy can dream can't he?) and white supremacy would remain as powerful as it was today.

Now, white privilege, on the other hand, is a reference to the myriad of benefits bestowed on white people stemming from the aforementioned system of white supremacy.

It's white privilege to walk into a room and be interviewed by someone who looks like me. It's white supremacy that made it so this is a routine occurrence.

So, white supremacy refers to the system, white privilege refers to its benefits. The two are inexorably tied, but not the same thing.

But it's not just when I use the term white supremacy that people accuse me of being too confrontational. It's part of my style. I am confrontational. I believe white people need to and deserve to be startled, even wounded in a sense. The truth is startling. The truth does hurt. I won't package it in a way that pretends otherwise to cater to the sensitive. And surely because of that my message won't get through to some of these sensitive white people. And here's the thing, that's perfectly okay with me.

There are many ways to approach talking about race and racism as a white anti-racist. And there are many ways people will hear and respond to people talking about race and racism. Some people need to be slowly introduced, handled with kid gloves, and coddled into giving a shit about racism. And they'll find plenty of people who take such a gentle approach. Good.

Other people need to be shocked, startled, and dealt with in a direct, no bullshit manner to come around to giving a shit about racism. They'll find less people who take this approach. But my central point is that these two approaches, while different, can and need to both happen. One doesn't take away from the other, and both are necessary.

Here's the kicker, though I stray toward the latter approach, I don't and won't focus my time and energy trying to convince other white people to care about racism. It matters. It kills. It ruins lives. And it impacts almost every facet of life in the U.S.--it's white privilege that allows some of us to pretend this isn't true. Anyone who won't acknowledge this is part of the problem. To pretend otherwise would be dishonest. And anyone who professes to care about racism but sees the words white supremacy and crumbles away doesn't really care about racism and isn't ready for anti-racist work.

It's not that I don't think it's important more white people care about racism. Not at all. It's just that I don't believe talking them into it--gently or otherwise--is likely to make that happen. Not to mention, most people who act as if they're a few convincing words away from caring about racism are usually deliberately wasting your time. These are concern trolls. Or sea lions.

I'm not going to waste my time and energy trying to convince people to do what is morally right. What is historically just. And what should be a given for any white person who cares to stand on the right side of history.

And yes, that is a condemnation of those who sit silently by, ignoring or failing to notice the oppression and racism that surrounds us. And no, that condemnation is not meant to bring those I condemn into the fold. If someone doesn't care about racism and oppression in all its forms I don't expect my (or anyone's) condemnation to change their mind. Nor do I believe refraining from such a condemnation, or the use of accurate labels, like white supremacy, would.

Personally, I think it's much more important to speak to white people who are committed to fighting oppression in all its forms, but don't quite know how, rather than to speak to those mythical creatures who might be convinced if someone would only approach them with the right tone or turn of phrase. Or my favorite, the right data.

Do we need more white anti-racists? Always. And the best way to cultivate them is to model what that looks like for those would-be anti-racists who need no convincing of this works' importance, and simply lack the tools, awareness, and understanding of what anti-racism looks like, rather than by wasting our breath on those who need to be convinced of its importance in the first place.