Did the Federal Communications Commission get the White House jobs memo? You know, the one with President Obama's exhortation: "Jobs must be our number one focus in 2010."

We wonder because the FCC is actively considering several measures that could depress near-term job growth. A new regulatory regime known as Net Neutrality, in particular, could discourage investment in the crucial broadband infrastructure sector, hurting the workers who build and maintain these networks, then crashing into the hardware and software companies whose products comprise the Internet.

Messing with the vital technology industry is no small thing. We just suffered a severe business investment recession. Consumption has held up relatively well (near an all-time high as a share of GDP in the fourth quarter of 2009), but business investment of just 11.9% of GDP is at an all-time low. Info-tech capital expenditures, meanwhile, were $455 billion in 2008 and accounted for 43% of all non-structure U.S. capital investment. Communications service providers alone invest north of $65 billion a year. Broadband is one of our few vibrant, healthy business sectors. Cisco CEO John Chambers, for example, just announced he's hiring 3,000 new workers this spring. Do we really want to impose new regulatory risk on this lonely standout industry?

To gauge the possible fallout of new Net Neutrality regulation, we looked at what Internet industry companies were saying. The FCC received an astonishing 100,000 individual comments on its Net Neutrality proposal and some 15,000 official filings from companies, trade associations, academics, and think tanks. Excluding the associations, academics, and individuals, we analyzed the company comments and discerned support for or opposition to Net Neutrality. We then tabulated the number of workers employed by these Supporters and Skeptics and found a huge disparity. 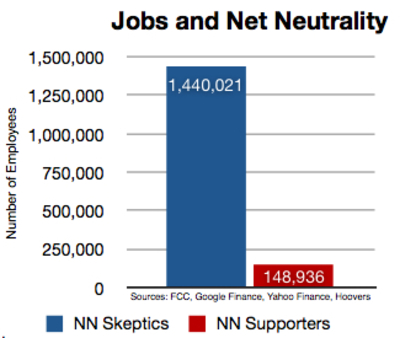 To make the fight fair, we then excluded the big communications service providers who are viewed as the most aggressive Skeptics. But the remaining Skeptics, including many of America's most important networking, semiconductor, and software firms, still employed 570,316 workers, almost four times the number employed by the Supporters. 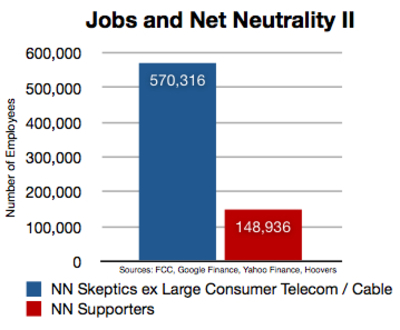 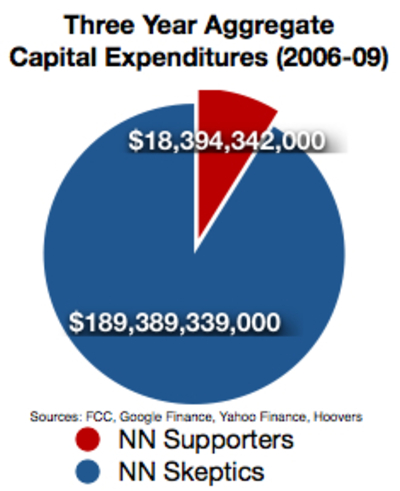 These numbers are, of course, not dispositive. One can't gauge Net Neutrality's overall desirability merely by who files FCC comments nor solely by its short-term effects on capital investments or job growth.

This analysis does, however, show that many U.S. companies employing large numbers of American workers oppose a major increase in regulation of perhaps the nationʼs most important high-growth industry. An industry that is healthy, dynamic, and growing. An industry made up of some of the nation's largest infrastructure investors. And an industry that, because of its reliance on Wall Street for massive financing of long-term capital projects, is highly sensitive to regulatory changes that could prohibit business models or even ban certain microchip innards of routers, switches, modems, and mobile phones.

Supporters might argue Net Neutrality will protect consumer access to the Internet and promote long-term innovation. These are crucially important goals. But I think they are wrong on these policy virtues as well. I've made the case elsewhere that Net Neutrality could have prohibited important business and technical innovations, from the exclusive handset arrangement that spawned the iPhone to the content delivery networks (CDNs) that enabled YouTube.

Regardless of oneʼs view of long-term effects, however, there is little chance Net Neutrality regulations could improve the near-term jobs picture. There is, on the other hand, a substantial possibility for harm. Net Neutrality could substantially reduce the willingness of service providers to invest in new wired and wireless networks. And it could do so immediately. Any capital expenditure reductions would directly affect tens of thousands of workers who build and maintain these networks. Capex reductions would also ripple through the whole network equipment and software value chain, starting with large companies like Cisco, Juniper, Corning, and Qualcomm; then damaging the prospects of hundreds of smaller suppliers in the high-end semiconductor and software sectors.

The longer-term adverse effects of less bandwidth, less robust and sophisticated networks, and less ubiquitous connectivity are difficult to quantify, but they are large. Every new digital device, Web business plan, and content model in the burgeoning Web media space would be put into question. The general productivity of the economy could suffer as the digital tools that speed up work around the world advance at a slower pace. Both the short-term and long-term interests of U.S. jobs and innovation are served by the maintenance of the existing "Four Open Internet Principles" without new Net Neutrality regulation.