Receiving commissions for things like the White House Holiday card is not something that comes easy. It may appear as if it is selected by chance, or even worse by nepotism, but after talking with landscape painter Emily Buchanan I have learned that neither of these is the case. Such commissions are won through controlled factors such as hard work, dedication and a savvy marketing strategy.

Emily Buchanan lives in the Connecticut countryside with her family where she paints landscapes, primarily of the New England hills and the foggy coasts of Maine, but she has painted all over the world. In talking with her recently for this article, I was struck by her love for what she does and the integrity she displays for her work.

Buchanan works plein air and can often be seen painting in the countryside near her home in Western Connecticut. She paints outdoors on site and chooses not to work from photos, preferring the fresh air and nuances of color and light that present themselves. " I just like to paint outdoors. The freedom of it...." She often travels to warmer climates to do specific commissions when the weather is cold in New England and has painted in Australia, Thailand, Costa Rica, Malibu, Palm Beach, and the Virgin Islands to name a few. Earlier this year Quest Magazine said that, "Buchanan's paintings bring all of those wonderful places, and the emotions that they evoke, to those who can't be there."

The Narrows by Emily Buchanan

Buchanan has paid her dues and put time, years, into perfecting her craft, so the job of painting the holiday card for the White House should come as no surprise. Overnight success is illusionary. It is more something that happens one day after years and years of hard work. I asked Buchanan a bit about her background.

"I studied at Lyme Academy, the National Academy of Art, the Art Student's League, and then in the Boston atelier of Paul Ingbretson for a few years. At that point I wasn't painting landscape, it was more portrait, still life and cast drawing. Over time, I became drawn to the landscape more and more. I have gone out painting with different painters and taken a few workshops, but really it's just going out everyday and doing it. Finding out what worked and what didn't just took years and years of repetition. The surprising thing is why I continued when I wasn't that good. I guess I just really loved the process. 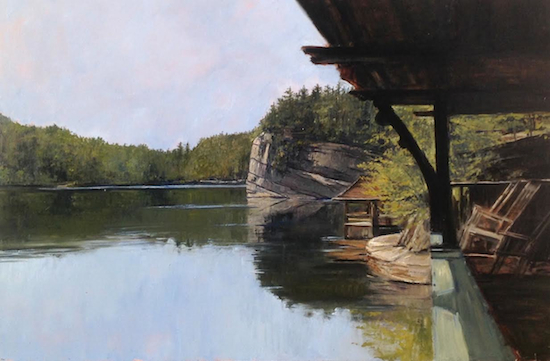 Once I really started to do landscapes it was hard for me to go back into the studio. I love being outside. Everyday I meet different people. I know a lot of artists don't like it when people come up and talk to them. I love it. Most people are respectful and don't stay too long, but it helps to make everyday different and interesting.

I am a really introverted social person. I like people but after a while have to retreat and be alone for a while. My job allows me to do this." 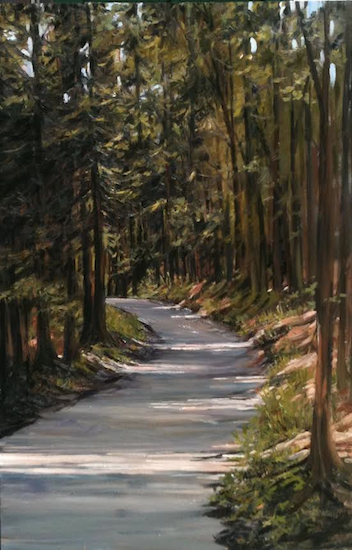 Would you cite the Hudson River School as an influence?

"I am influenced by the Hudson River School, and Kensett in particular. His painting of Lake George in the Metropolitan Museum, for instance, is what led me to discover Lake George. I also love Corot. If there is anything I have taken from Corot it's that my greens are so grey. If the green is too vibrant it can kill the whole painting. I'm also very inspired by Sargent, even though he rarely painted landscapes."

The Dunes by Emily Buchanan

Did you have connections to the White house before you painted the holiday card?

"I come from an interesting old Boston family that had some connections, but it's not how I got this commission. My only family connection to the White House was my Great Grandfather. He went to boarding school with FDR, and they remained lifelong friends. I don't know if that counts, though, since it's ancient history now."

How did you come to be chosen for the White House holiday card?

"It was through the Government Arts in the Embassies program which I have tremendous admiration for. They hang paintings for two to three years depending on the length of the ambassador's appointment. I've worked with the program for about eight years, and that is how this project with the White House Holiday Card came about. It was about a year ago that the process began."

Buchanan is represented by Mark Murray Fine Paintings in NY, NY, as well as the Cavalier Galleries, both in Connecticut and Nantucket. Her paintings also hang in the lobby of the Sagamore Hotel at Lake George; at The Point, on Saranac Lake; at the Mayflower Grace in Washington, CT; and at Winvian in Morris, CT. Her list of collectors is long but with such notable people as James Taylor, Meryl Streep, and Alec Baldwin it is easy to understand why the White house came to choose her. She has done the work. 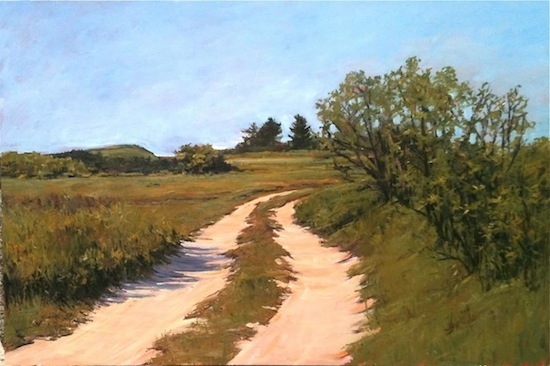 "Kim Taylor commissioned me to paint their view in Winter, Spring, Summer, and Fall, after the James Taylor song. The way that came about was when somebody stopped while I was painting, and commissioned me to paint her view. While I was doing that, she told me that she was a decorator, and that the Taylors were clients. So much is being in the right place at the right time, and my collectors are so generous to me. I am constantly amazed at how kind people are.

The greatest compliment that I ever received was when I was commissioned years ago by two children to do a painting for their Father. Years later they wrote to me and told me that he had passed away, but that he had asked that the painting be brought to the hospital because it made him feel connected to a place that meant so much to him. That touched me deeply. A painting is not a photograph. It is so much more."