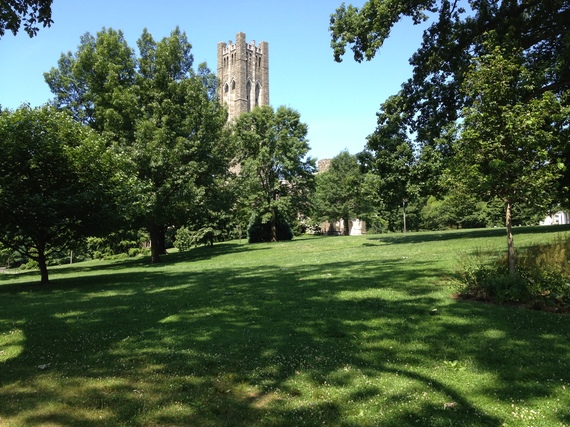 Swarthmore College, where I took my first ethics course, which changed my life
Photo by Bruce Weinstein

A friend of mine, whom I'll call Maurice (not his real name), brought a bottle of wine to a party at my home. I took one sip, and it's hard to convey in words how awful it was. "Yech," I said. "It tastes like battery acid!" Ordinarily, I wouldn't have said such a crass thing; but my friend loves a good joke, and I figured he'd like this one. Besides, I was telling the truth. What could be wrong with that?

A lot, as it turned out. Maurice was hurt by my declaration, and I found myself apologizing over and over for my poor judgment. I learned the hard way: telling the truth isn't always such an admirable thing. My friend hadn't even asked me what I thought of the wine, but if he had, it would have been better to say something truthful that wouldn't have been hurtful, such as, "It was very nice of you to bring us a bottle of wine, Maurice. Unnecessary, but much appreciated!" I would have been able to honor both the duty to tell the truth (entailed by the third principle of ethical intelligence) and the duty to avoid hurting my friend's feelings and our relationship (entailed by the first principle of ethical intelligence).

One of the challenges in living an ethically intelligent life is knowing how truthful to be, since telling the truth, the whole truth, and nothing but the truth in every situation can harm valued relationships. When you're giving testimony in a legal deposition, you have both a legal and an ethical obligation to be completely truthful. The ethically intelligent taxpayer tells the IRS the truth about his or her income, even though he or she could save some money by fudging this information. When they make a mistake at work, ethically intelligent people fess up to their bosses rather than blame someone or something else. In all of these scenarios, ethical intelligence calls for being forthright about the truth.

Outside of such circumstances, however, ethical intelligence requires balancing the responsibilities of telling the truth and not causing harm. It's true that Maurice's bottle of wine was foul tasting, but I was under no obligation to tell him this. In fact, it's just the opposite: I was wrong to do so. Striking the right balance between being truthful and not hurting people is what makes living with ethical intelligence so challenging -- and ultimately, so rewarding.

A final word about balancing truth telling with doing no harm: Isn't what I said to Maurice offensive rather than harmful? How did I damage Maurice in any significant way?

The harm that followed from my poor choice of words wasn't to Maurice per se but to our relationship. Of course, our friendship has endured (and it would have been a mighty shaky one if a single slip of the tongue could ruin it). But words or actions that are merely offensive can harm a valued relationship, especially if this occurs often enough, the words or actions are particularly egregious, or the person on the receiving end is highly sensitive. Good relationships are characterized by mutual respect and trust; offensive speech can compromise this. Such speech thus falls within the purview of ethical intelligence (or unintelligence, as the case may be). Telling the truth to someone should take into account the degree to which your relationship could be harmed by what you say.

Finding the Courage to be Truthful
During my keynote speeches, I ask the audience to form pairs and tell one another about a time when a) they had to tell someone the truth, b) it wasn't easy to do, c) they found the courage to do so, and d) something good happened as a result. Afterwards I offer an incentive (a.k.a. an ethical bribe) to folks who are willing to tell us what they said. I've heard some fascinating responses, such as:

You may soon find it necessary to speak truthfully to someone, and I hope you'll find the strength to do so--and that only good things happen as a result!

Thank you for reading my blog. I'm on my way to Anaheim, California to present a talk on ethics and leadership to the fine folks at the National Association of College and University Business Officers. Very exciting!

P.S. You may sign up for my free weekly newsletter here. In addition to ethical analysis of the issues that matter most to you, I offer subscribers fun and useful things like free audiobooks and other goodies.