May 4 has loomed large on my radar every year since 1970, when Ohio National Guard troops shot and killed four young white Kent State University students and wounded nine young white students. I pulled my car over and cried when I first heard the news. In the late '70s I represented the students and their families in retrying and settling their damages claims against Ohio's governor, adjutant general, and National Guard officers and Guardsmen.

Commemorating the 45th anniversary of Kent State shootings, PBS aired a program about May 4, 1970, "The Day the '60s Died." According to PBS' website, what happened in America in May 1970 starting with America's invasion of Cambodia and the May 4th shootings at Kent State caused "frustration and anger [that] split American society apart, and we still live in the aftermath of that rift." I agree. 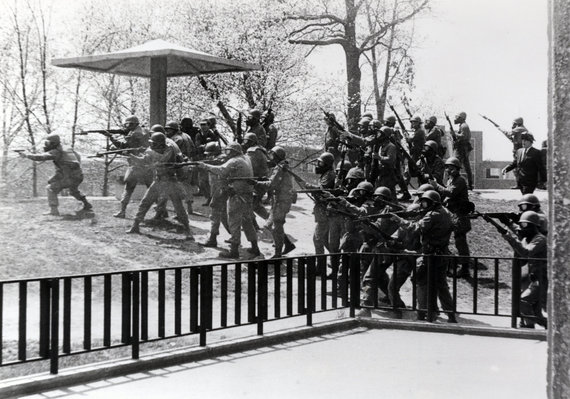 There were countless still photographs and one super 8 motion picture taken in the minutes that led up to and during the National Guard's more than 12 second fusillade on May 4, 1970. They were all on analogue film, and no pictures or film were found looking down or over the National Guard gun barrels in the minutes and seconds before the Guardsmen opened fire. This gap in evidence enabled the officers and Guardsmen to testify and argue that they fired in self-defense because they were in imminent danger of being overrun by student and other rioters armed with rocks and bricks and other weapons. 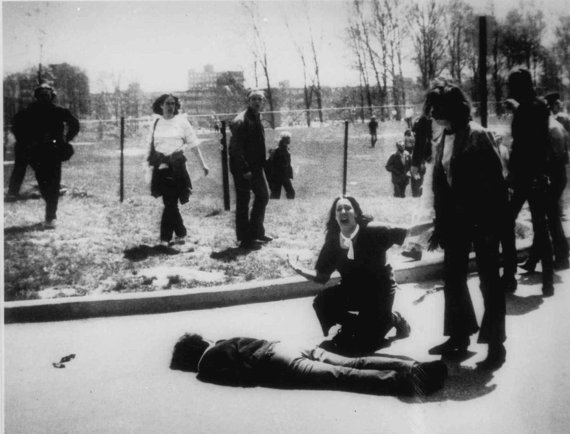 Videos and real time photo photographs are powerful evidence. Careers of campus police officers ended or were trammeled and administrators were disciplined at the University of California, Davis campus due to a video gone viral of a campus police lieutenant's going down a line of peaceful handcuffed student demonstrators, pepper spraying them. In a prison conditions class action case, litigated by my law firm, the record included videos of mentally ill patients being pepper sprayed and brutally extracted from their cells resulting in a robust remedy order by a federal court and a sea change in policy re the use of force against mentally ill inmates by the State of California.

Sometimes new technology can make a difference at least historically even in cold cases like those dealing with the May 4, 1970 Kent State shootings. New audio technology recently applied to the one audio tape of the events leading up to the shootings, reveals that there may have been an order to fire on the students.

Had digital cameras, including smart phones cameras, existed in 1970 almost surely there would be an archive of photos and videos looking down the Guardsmen's weapons at the student demonstrators during the crucial seconds and minutes leading up to and during the shooting. We can speculate whether such a real time archive would have made a difference in the Kent State criminal and civil damages cases. I think so -- some Guardsmen might have been convicted of crimes, and the victims likely would have secured more money from Ohio.

One of my best friends, Melba Patillo Beals, is one of the nine (then) young African Americans who desegregated Little Rock Arkansas' Central High School in 1957. She and the others suffered unfathomable horrors during the year that lead up to President Eisenhower's nationalizing the Arkansas National Guard and sending the Regular Army's 101st Airborne Division into Little Rock to protect the children. See Beals, Warriors Don't Cry. TV coverage of the hateful mobs terrorizing the nine students was a factor in galvanizing national opposition to Southern "Massive Resistance" to the Supreme Court's Brown decision invalidating state sponsored racial segregation of public schools.

Of late Melba and my other African American family and friends are increasingly distressed at the unremitting news of yet another African American man being killed by police, as am I. This cycle of police excesses directed at African American and other people of color became increasingly fixed in the public consciousness when Oscar Grant was shot dead by a white BART police officer at the BART Fruitvale Station in Oakland, California on New Year's Day 2009, and then when Travon Martin was killed by a volunteer neighborhood watchman in Sanford, Florida in February 2012.

Starting with the killing of Michael Brown in Ferguson, Missouri in August 2014, it seems that almost weekly yet another African American is killed unnecessarily by the police. Just in the last few weeks Anthony Scott was killed in North Charleston, South Carolina by white police officer Michael T. Slager, who shot eight times at Scott as he ran away from Slager after a minor traffic stop. Next came the killing of Freddie Gray while in the custody of the Baltimore police.

Melba's brother was a peace officer for his entire career. He calls Melba after each press reported incident in which the police have killed or brutalized yet another person of color. He laments that these incidents are caused by the evident lack of training and supervision of the police involved, whether they be white or black or both (as was the case in the killing of Anthony Scott and the apparent "throw down" cover-up that followed). Many of my African American friends believe that these events result from innate racism.

One has to wonder how America would react if every week there were comparable killings by police of white people. The African Americans killed and wounded by white Mississippi Highway Patrol officers and Jackson, Mississippi police early May 15, 1970 at Jackson State got no compensation or other vindication. By contrast, the white victims of the Kent State Shootings secured compensation and an apology. And the use of deadly force against white college students at Kent State 45 years ago caused such an uproar that the U.S. Defense Department reformed the training, weaponry and orders of the States' National Guards so profoundly that no similar tragedies since have been due to National Guard use of deadly force.

The number of deaths and serious injuries of African American men and other people of color during interactions with police or while in custody are grossly disproportionate in relation to the numbers of deaths and serious injuries of white people during police interactions or while in custody. No surprise there. According to the New York Times, 1.5 million African American men are missing from free society due to incarceration, proportionately many more than white men. According to the San Francisco Chronicle, analysis of statistics drawn from the City's criminal case management system shows that from January 2010 through April 24, 2015 African Americans who comprise just 6 percent of the City's population accounted for 45 percent of the 9,633 suspects cited with resisting arrests.

Real time videos and photos could make a difference in keeping people of color more safe from police misconduct. After all, some of the police caught on film beating Rodney King in Los Angeles on March 3, 1991 were convicted of a federal crime (after acquittal of state criminal charges) and a civil jury awarded $3.8 damages for violation of King's civil rights and the court awarded $1.7 million for attorneys' fees.

It is, of course, true that even when apparently blatant instances of police undue force are captured on camera, the police perpetrators often get off without even being prosecuted. For example, the police caught on film who were responsible for the death by asphyxiation of Eric Garner in New York City were not indicted. But there is ample cause to believe that the ubiquity of video cameras including on smart phones will make a difference. North Charleston police officer Slager has been charged with murdering Anthony Scott, because the events were captured by a witness on his smart phone's video camera. Six Baltimore police officers have been charged with crimes, one for murder and several for manslaughter, due to their roles in the death of Freddie Gray. Private video of Gray's arrest and of a fourth stop the paddy wagon carrying him made on the way to the police station could be important evidence in the case.

The Internet search term "videos of police brutality" goes to multiple entries. Truly, "the whole world is watching," which could lead to real change.

NOTE: This post, which was submitted on April 30, has been updated to reflect the announcement by the Baltimore State's Attorney on May 1 that six Baltimore police officers were being charged in the death of Freddie Gray.