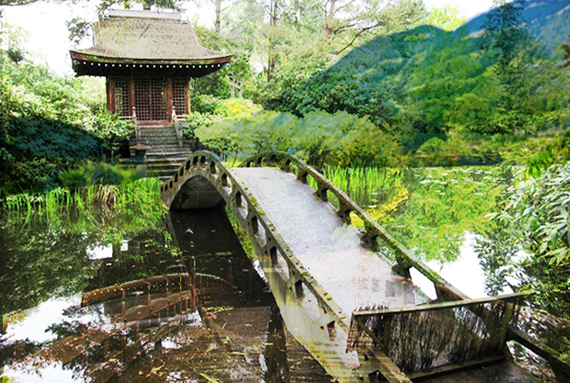 I'm not a religious person. I was baptized a Catholic but slowly realized that many of Catholicism's beliefs and principles did not fit my own. Over the years, I have explored many different religions.

After I visited Japan as part of a student exchange program about a year ago, I became fascinated with Shintoism. Shinto beliefs are encapsulated by a perspective of seeing nature and the world in all its beauty. Shintoism emphasizes an aesthetic sensitivity, placing great value on nature, harmony, and balance in a person's life.

As part of my trip to Japan I stayed with a host family in the mountainous region of Nagano Prefecture in the town of Hakuba Valley. My hosts were a Japanese couple who spoke little English but showed me the silent wisdom of nature and the importance of kindness and hospitality, values that are greatly emphasized in Japanese culture.

One morning, my host mother Akiko woke me up early to walk the dog, a black lab named Toshi. The walk took us over a mountain, and along the way I noticed Shinto shrines everywhere. I felt completely at peace in the quiet morning air. I learned that shrines weren't necessarily buildings but could be as simple as a rock or as large as a mountain. In fact, in ancient times the only Shinto shrines that existed were mountains, waterfalls, rocks, trees, forests, or cliffs. It wasn't until more modern times that buildings were built to hold Shinto religious ceremonies.

Mountain worship, referred to in Japan as sangaku shinko, is common among Shintoists. Although all mountains are seen as holy, the most holy mountains in Japan are Mount Koya, Mount Tateyama, Mount Hakusan, and Mount Fuji. Mountain asceticism, or yamabushi, is when people search for spiritual, mystical, or supernatural powers through isolation in nature. Many Shintoists make journeys or pilgrimages to explore their faith, linking together many sacred places in the process. These journeys are known as honzon junrei, or to wander around (jun) to worship (rei) the principal deity (honzon).

No matter what form, Shinto shrines are restful places filled with sacred holiness. They provide spiritual vitality. When I felt that sense of tranquility and wholeness in nature, I felt a resonance with the Shinto psyche.

One year later, I felt the magnitude of nature's magic at 6,662 feet on the peak of Mount Washington.

I stumbled but didn't fall. I had watched more experienced solo hikers turn back, but didn't feel afraid as I put one foot in front of the other. I had my crew; my crew had me. We were a force as strong as the 80 mph winds whipping our faces, held together by the unexpected bond we had formed despite having known each other for only two weeks. At incredible heights we had crawled on all fours to avoid getting blown off the cliff while straining our eyes to see our next step. The fog and rain enveloped us as we climbed. The adrenaline rush was like none I'd ever felt!

Climbing Mount Washington on the last day of our two-week backpacking trek along the Appalachian Trail in New Hampshire's White Mountains gave me a confidence and surefootedness that extended way beyond the physical tests I had faced. At the peak, all eleven of us stood together, huddled like penguins. I looked around and thought about the conversations and laughs I had shared with each person around me. Never before had I become so close to a group of people in such a short time.

My life slowed to a walk, both literally and figuratively, as we hiked 12 hours a day up and down mountains. All non-essentials were stripped away -- phones, possessions, comfort foods, civilization. For a time, it seemed, all we had was each other. We had arrived with bits and pieces of our lives from home, but we had unknowingly left behind the superficiality of our high schools' social constructs. On the trail it didn't matter what group I belonged to or how many likes I got on an Instagram photo. I perceived the people standing right in front of me as they were in that moment. I felt present in my conversations with these fellow backpackers in a way I had not known before. I could be and think without distraction. No one had a phone to check. Our deepest thoughts stayed with us for longer and we truly paid attention to each other.

Sharing my innermost thoughts and viewpoints in a trusting and accepting environment enabled me to be myself and speak my mind, unabashedly and without restraint. I could step back and re-calibrate my values. I felt carefree.

Small joys suddenly seemed big: washing my feet in a stream at the end of a long day, holding a hot cup of tea on a cold night, painstakingly flipping pancakes in a thunderstorm. I wasn't wearing makeup, my hair had become dreadlocks, and a mixture of dirt and dried blood tattooed my skin. So it came as a surprise to me that I felt happy on a deep level in a way I hadn't in a long time. I also felt a connection to Shintoism and an acute awareness of the spirituality of nature and how it shaped who I am. I felt like a mountain worshiper on a pilgrimage, surrounded by the holiness and purity of the trees, moss, and cliffs.

On that last day on the peak of Mount Washington, as my heart beat fast and the adrenaline rushed through me, I felt the magic of nature. I felt magic in the connection I had formed with the people around me in such a short time. I felt something that I had never felt before. In the fresh air, as the weight of my accomplishment dawned on me, I felt complete.

Upon returning to my suburban New Jersey hometown, I began to explore local forests and discovered Harriman State Park, which is just a 30-minute drive from my town. With my two dogs I hiked new trails every day. Nature has become an essential part of me. In the two weeks I spent in those New Hampshire woods, I found the freedom to own who I am and to shape my values from within.

When she wrote this piece, Katie Reis was a senior in high school. She enjoys running, painting, reading, and doing anything outdoors. She plans to pursue some sort of career in the humanities, as she especially loves history and Latin. Katie is now a freshman at Cornell University.