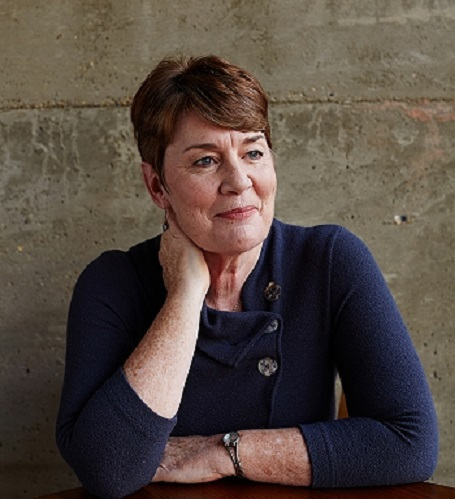 Fiona Barton is a British journalist who, while working for the Sunday Mail and the Daily Telegraph, spent a great deal of time in court covering trials. This exposure provided the creative spark for Fiona's debut novel.

The Widow focuses on three people: Jean Taylor, the wife of the prime suspect in a criminal case; Kate Waters, a journalist who is part of the media circus camping out at Jean's front door; and Bob Sparkes, a detective working the case. A child has gone missing, and Glen Taylor, Jean's husband, becomes the primary suspect in what appears to be an abduction.

The search for the truth--both in the past and in the present--takes shape through the interlocking narratives of these three characters. Each one tells a story, but some may be more truthful than others.

You've mentioned as a journalist, you spent time covering trials in court. How did the idea for The Widow come to you?
As a reporter, I spent a great deal of time in court. During brief breaks in testimony, I would often look at the spouse, usually the wife, of the accused. I began to wonder how listening to the details of a crime purportedly committed by your spouse would affect that person's view of her husband. I asked myself how much of the husband's activities the wife had known; and how much had she allowed herself to know or be aware of during the time when such crimes were being committed. From those experiences, Jean Taylor was born.

The Widow describes a complicated relationship between Jean and her husband Glen. How would you describe it?
At the beginning of the novel, Jean is quite passive and remains at home, cooking, doing housework and the usual daily chores. But as the novel progresses, there's a change in the dynamic: she becomes less benighted and more proactive. So, there's an evolution in Jean's character as the story unfolds. She progresses from passivity to someone who is far more capable of dealing with the world. She becomes less gullible and dependent upon Glen than she was in the beginning of the novel.

Novels with unreliable narrators are popular these days--I'm thinking of Girl on the Train and Gone Girl. One narrator in The Widow is not very reliable. What do you think makes such storytelling so popular?
I know I love a novel with an unreliable narrator, and I think many readers do as well. It's a wonderful experience to be reading a story and think you've got things all figured out, and then suddenly, it all goes upside-down on you. The events can have far more impact with an unreliable narrator. It's something of an adrenaline rush to have one's expectations upended, and to see a story veer off in an unpredictable direction. Unreliable narrators have been with us since the beginning of storytelling and have, I think, always been popular devices.

In psychological thrillers, the events could happen to any of us. Their appeal derives from stories dealing with the 'possible'...not the highly improbably. It's quite easy for a reader to identify with the protagonist.

Social media play a large role in The Widow. How have social media impacted journalism and novels?
Social media have brought a sea change in journalism. We now have online newspapers, and because of the Internet, there's virtually no information beyond your reach.

As for novels, the effect has been multi-pronged. As a writer, you can no longer present a contemporary story where someone is out of touch and cannot be reached by cell phone. On the other hand, social media and the Internet have made research so much easier. And for novelists, social media and the Internet have become central for publicity and sales, what with Amazon, online book bloggers, and reviewers. Writers today must maintain a presence on Twitter and Facebook, and it's not enough to just write a novel and expect your publisher to handle all the promotion. The Internet and social media have brought immense changes to novel writing and to journalism.

What were your major challenges when writing The Widow?
I think it was Hemingway who said, and I'm paraphrasing here, 'First, simply sit down and write.'

I've been a journalist since 1979, but this was my first attempt at writing fiction. The greatest challenge was simply believing enough in myself to think I could do it. The other challenge was finding enough time to actually sit down and write a novel, in addition to taking care of the other things in my life.

Who are your literary influences?
There are many, but I can think of three writers who have influenced me greatly.

First is Hilary Mantel, author of Wolf Hall. She's capable of writing so beautifully and in so many different voices, within the same novel. Kate Atkinson is another writer I admire deeply, as is Kazuo Ishiguro, especially for his novel, Remains of the Day. I love how he leads the reader on a journey with the butler who clearly is backing the wrong horse. He too is capable of assuming so many different voices within his novels.

What's coming next from Fiona Barton?
It will be another psychological thriller. I've got the first draft written but don't have a title for it as yet. I'll be bringing back Kate Waters, the journalist, from The Widow.

You know, there's a great difference in writing a second novel as compared to the first. With The Widow, I could take all the time I needed. With the second, I'm on a deadline and there are people looking over my shoulder.

Congratulations on writing The Widow, a gripping psychological thriller that looks beneath the surface of a crime, and sheds brilliant light on the victims, perpetrator, the police, and everyone else involved.