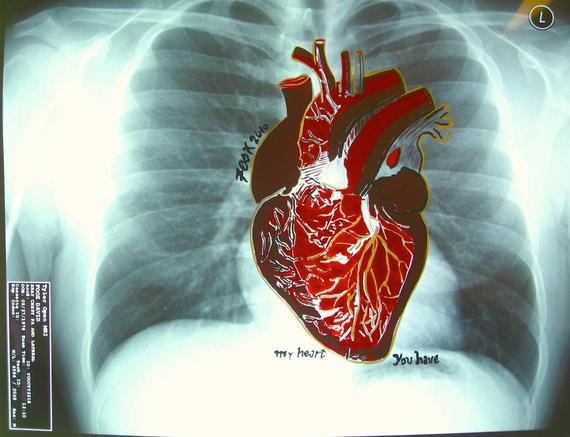 I learned at cardiac rehab this week that my artery that was 90% blocked was the infamous "Widow Maker," so named because it is responsible for those sudden deaths that come on without any warning. I told my husband, John, and he said we talked about this in the hospital, that the cardiologist had called it the widow maker; I have no memory of that conversation. I also learned that 90% of people who have a heart attack outside of a hospital setting die.

Because luck is all that can account for my living while so many other die of exactly the same thing. It is lucky that I had a warning sign. It is lucky that I wasn't driving to Savannah as planned that day. It is lucky I called 9-1-1 instead of listening to my doctor who told me I was just anxious.

I almost wasn't here, gone. Had symptoms not announced themselves at 90% blocked, I wouldn't be or wouldn't be for much longer, without ever even knowing. I discounted this until now, thinking the whole event was no big deal.

The Widow Maker is not only responsible for those sudden death heart attacks, but also for great damage to the heart if you live. "Your blockage was so high that a huge portion of your heart would have been damaged without this warning series of heart attacks," the cardiologist said.
Instead, I have little or no damage to my heart. I have a great chance at a full recovery.

I thought being a vegetarian for 40 years would save me from any of this, but the doctors just shook their heads when I mentioned that, each saying "genes." Having a father dead at 53 from heart disease caught up to me at 56, vegetarian or no vegetarian diet. Now vegan, I'm determined to reverse it to avoid other artery blockages, of which I already have another one, the doctors tell me.

Time will tell. This time, I was so lucky that it scares me.

It scared me into taking cardiac rehab very seriously, into transitioning to a vegan diet which has been shown to reverse coronary heart disease, into meditating and doing yoga for stress and trauma relief, into monitoring my blood pressure like it is the stock exchange or Johnny Depp's travel schedule.

Life is just this tenuous every single day. For all of us.

What changes when death comes knocking? Many studies have shown that what changes is one of two things: 1) Nothing; or 2) Everything.