Who do you believe, me or your own eyes? It depends.

I ran back to my hotel room, the smell of blood, fear and rebellion still fresh in my head. Somewhere hovering over me was a deadline for the newspaper and a vague sense that some competitors were also writing their own versions of what had happened throughout that long day and night. History, I was sure, held its breath and waited, relying on our telling of it. 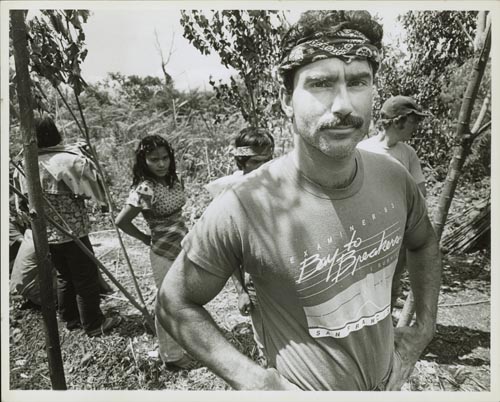 It was 1986, in the Philippines. I plugged in my brick of an Epson portable computer, flipped up the screen with its three-line display and made sure my sofa-sized modem was handy. Photographer Kim Komenich had his set-up for picture transmission that involved a rotating drum with sensors, like an old phonograph, just a lot slower. Phone lines sucked.

We could only know for sure what we had seen out there, which anyone in San Francisco with a quarter would know in about another 18 hours. My notebook and Kim's camera were the instruments of recorded fact.

Today, a non-traditional news web site, WikiLeaks, which has its own mystery and secretiveness, apparently cracked a US government encryption code (so, how good can those codes be?) and released stunning and revealing classified helicopter gunship footage they'd cadged from a source.

Within moments, the world exploded in furious debate over 38 minutes worth of hard-eyed Baghdad gunfire and death back in 2007.

A full pinball meltdown among opinionators everywhere spun out flaming outrage and rampant, self-assured positions on an Apache chopper crew's shooting of a dozen people in the street. From blogs: "Iraq Slaughter..Not An Exception, The Rule." On the other side: "Killed Photographer Was Hanging With Insurgents." And those were the calm ones.

The old, venerable media outlet, Reuters, which had two employees among the dead, could not get squat out of government officials the last three years, despite pressure and a Freedom of Information Act request. So much for the power of MSM. Thank you shadowy world of WikiLeaks -- unless you're one of those who thinks the organization is a national security threat.

I looked at the footage, and the blow-ups of the footage. There are people with cameras who were mistaken for guys with guns. There appear also to be guys with guns. There was a van -- an insurgent wagon to some, a makeshift ambulance to others -- and two kids inside who were wounded. I read the rules of engagement posted on a variety of web sites that used the video.

So was any of the killing justified? War is a dizzying, murky, hyper-adrenalized maze. In the field of battle, there are facts to be had and truths to be revealed. But even with the magic of digital revelations sling-shot across all bandwidths, the answer has to be: depends. Depends on some things even second-by-second video can't uncover.

Soldiers snickering while shooting journalists and kids looks bad, no question. My favorite quote of the week was from the refreshingly blunt General Stanley McChrystal about civilian deaths in Afghanistan:

"We have shot an amazing number of people, but...none has ever proven to be a threat."

So what's the truth of this event? Investigations will follow. Still capitated heads may roll. Truth will be elusive, as always.

I've seen a fair number of people killed in countries at war, including combatants, journalists and civilians. Even at ground level, though, in the midst of bone and blood spray, sorting things out is near impossible.

I am sure of one thing: tragedy aside, this is all good for us in the bigger sense, starting with the video release. Transparency is the victor here. More information and even more yelling back and forth gives everyone more data and opportunity to make up their own minds. And it keeps life-and-death topics like war fully in the bull's-eye heat of aggressive social interaction.

That's what's really changed since my war correspondent days. No one today has to be a passive non-combatant in the important moments of our culture.