V. O. Key said of voters, 'when given a choice of scoundrels they will likely pick one.' The Wisconsin Primary looms as an important event because it clearly presents the choice of scoundrels. But there are two games afoot. For the GOP contenders, it is an 'all-in poker hand' to decide how the rest of the nomination game plays out. For the beleaguered voters Wisconsin is a 'minimax-regret' game where they try to calm their own fears by voting to minimize buyer's remorse.

The Contenders' Game: For front-running Donald Trump, Wisconsin is the opportunity to win in a state where the ting of agrarian populism and southern white voter resentment are not at work. For Ted Cruz, it is an opportunity to post a win in a big primary state without Baptists - indeed, a win on the home turf of mainstream leaders RNC chair Reince Preibus and Speaker Paul Ryan. For John Kasich, it is his first real chance to try and score outside of Ohio.

A year ago, Wisconsin was not a consideration. Scott Walker, victor of the Union Wars and the Recall Insurgency, was supposed to be marching along having a Koch and a smile. Instead, Walker is out, and he has endorsed Cruz. So the die is most likely cast, in that the mainstream of Wisconsin has cast its lot with the most divisive and disruptive U.S. senator since Huey P. Long.

The Voters' Tale of Discontent: The data tell a tale of a tale of general discontent. Looking at nationally-known political objects in Wisconsin and national candidates, unpopularity is the most common feature. To dig into the Badger State's unhappy electoral April, we make use of the most recent Marquette Poll.

First, the objects -- Pres. Obama, Gov. Walker, Speaker Ryan, and the Tea Party - are generally well-defined and not too terribly reviled. Pres. Obama has the highest approval (52 percent, +7.7 points over/under), and the second-smallest 'no opinion' in Wisconsin (3.9 percent). His numbers basically mirror those of Gov. Walker (44 percent approval, minus-8.4 points over/under). The highest net approval (+17) belong to Speaker Ryan, who also has a very high 'no opinion.'

The Tea Party movement, once riding high, is held in extreme disregard by Wisconsinites, with a net minus-45 point over/under on the approval rating. Among Democrats, the Tea Party is reviled; among Republicans, it is merely divisive and disliked.

Kasich and Sanders are the only presidential contenders with net positive approval ratings. Sanders overall positive is very strong among Democrats. Kasich is still taking shape as a political concept - two in five Wisconsinites including many Republicans are still deciding about the Ohio Governor. Ted Cruz is approaching majority disapproval. Donald Trump has pulled off a remarkable feat, becoming the only candidate or object in Wisconsin politics less popular than the Tea Party (see Figure 1). 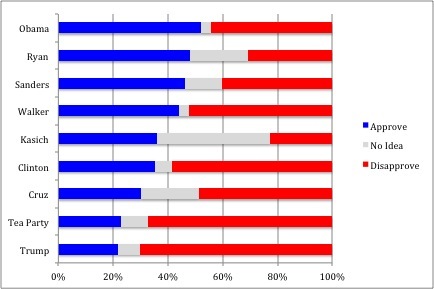 The great peculiarity of the GOP primary is how the voter preferences defy the need to win. Wisconsin is, put simply, a state that Republicans must win to have the presidency. The most recent poll puts over 70 percent of all primary votes behind not one but two candidate who most Wisconsinites are not comfortable with as president (see Figure 2).

Why You Should Listen to Wisconsin: It is important to listen to Wisconsin. A clash of political ideologies in the Badger State was driven by conservative advantage. After six years it has left a conservative shambles. The more divisive, forceful, and ideologically polarizing forces of conservative politics are also the least popular within both parties. On the left, the DLC's model of progress seems to have run its course with voters too. There's a great gap between preferences and expectations both within the parties and between the party standard bearers and the electorate.

Pity poor Wisconsin. What we see is a resigned quality to its electorate. Prof. Franklin's polling data indicate that, despite Trump's widespread unpopularity within and without his party, most Wisconsinites (including Republicans) expect a him to win. A not dissimilar situation exists in the Democratic Party -- voters favor Sanders but the general sentiment is that Clinton will win. To look at these data leads us to conclude that never have so many been given so much of so little that they want as voters in Wisconsin.