A successful democracy is like a successful marriage. It is impossible without the ongoing commitment of its participants. In a democracy that commitment mostly reflected in support for the rules of the game and confidence that government can fairly represent the interests of the governed. We can blame political elites for their infidelity to the public's interests or their willingness to "run against Washington" and "politics as usual" in their political campaigns but the trend lines are inescapable: Public confidence in government continues to erode taking with it public support for the rules of the game. Figure 1, which presents the ANES Trust in Government and External Efficacy Indices from 1958-2012, illustrates the broader trend of declining trust and the corresponding decline in external efficacy (the belief that individuals can influence government). 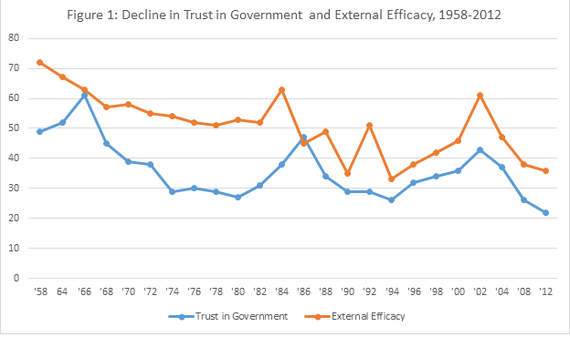 Donald Trump's surprisingly successful presidential campaign accompanied by violence at campaign rallies and a general disregard for democratic norms are only the latest manifestation of this declining confidence. Trump would be impossible at a time or a place where democratic commitments were more robust and where the temptations of yielding to a strong leader who operates outside of the normal rules of the game were less pronounced. In a recent post on the Monkey Cage blog, Harvard political scientist Pippa Norris notes that in the World Values Survey 44% of non-college graduates in the United States think it would be very good or fairly good to have "a strong leader who doesn't have to bother with congress or elections." Other scholars have relatedly noted the centrality of authoritarian attitudes to Donald Trump's core support.

What's going on? Well, there are a lot of people, mainly men, mainly uneducated, who lack opportunities, challenges, and the ability to provide. They're angry. And the corporate order isn't working for them. For them, the Trump appeal can be likened to the appeal of the fictional Tyler Durden in Fight Club:

God damn it, an entire generation pumping gas, waiting tables; slaves with white collars. Advertising has us chasing cars and clothes, working jobs we hate so we can buy shit we don't need. We're the middle children of history, man. No purpose or place. We have no Great War. No Great Depression. Our Great War's a spiritual war... our Great Depression is our lives. We've all been raised on television to believe that one day we'd all be millionaires, and movie gods, and rock stars. But we won't. And we're slowly learning that fact. And we're very, very pissed off.

We can add some collaborative evidence from a set of questions recently included in a YouGov Survey for Huffington Post. The survey was conducted from February 26-29 and includes 1,000 respondents selected from YouGov's opt-in internet panel using sample matching. Questions wordings and results (displayed in Table 1) largely confirm what we already know about differences in electorates. Compared to Democrats and Independents, Republicans value obedience in children and businesspeople and manufactures in society (critical components to the Authoritarianism F index), are more likely to believe in the Bible as the literal word of God and the United States as chosen by God to lead the world (critical components to Christian Nationalism, which we wrote about back in December). 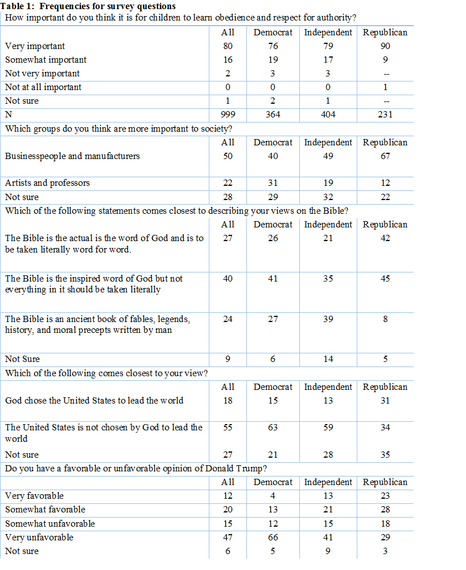 Each of these attitudes helps to explain Donald Trump's favorability. Trump does better among respondents who believe God chose the U.S. to lead the world and the Bible is the inspired word of God, and who value the role of businesspeople in society and obedience in children.

Taken in isolation, none of these appeals is particularly new or unique. Appeals to run government like a business, for example, are hardly unique. But those appeals are most often targeted at business community and rarely bridge the gap to include appeals to more base authoritarian instincts. The something new about Trump then is the combination of appeals to operate government like a business thus ignoring the constraints of checks and balances, separations of powers, and the protection of individual rights against impassioned majorities.

Add in a dose of white ethnocentrism and economic frustration and you have a volatile mix that suggests a lack of commitment to democratic processes. Three generations of post-World War II politics were dedicated to advancing and affirming these very processes. These data indicate the strong prospect that democracy and inclusion are failing among this long-courted, long taken for granted demographic. 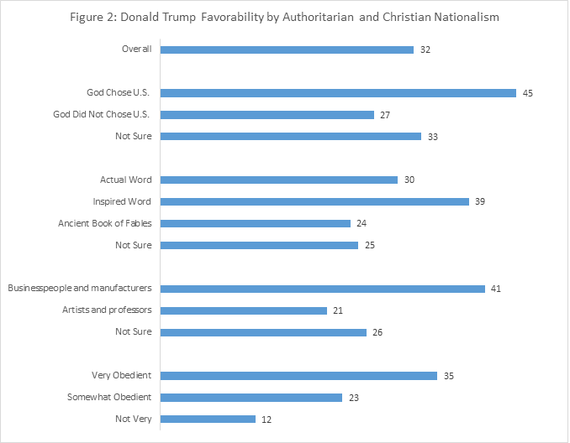