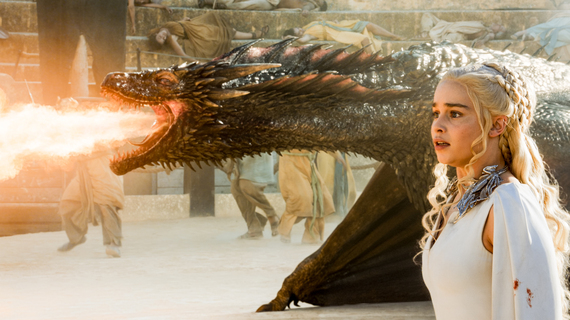 Note: spoilers for the Game of Thrones books and TV adaptation to follow. Proceed with caution.

While enduring George R.R. Martin's agonizingly slow writing pace, obsessive fans of the A Song of Ice and Fire series have scoured the books' extensive mythology for clues on how the saga might play out. The problem: many of the storylines on Game of Thrones, the wildly popular TV adaptation, have moved past where they stood at the end of 2011's A Dance With Dragons, the most recently published novel in Martin's best-selling series. The show has further complicated speculation efforts by altering important plot points and introducing entirely new ones into the mix, as well.

HBO waits for no man, and the sixth-season premiere, the follow-up episode and episode three made it clear that Game of Thrones has no patience for Martin's dilly-dallying. In a single hour in the premiere, two fan theories that still haven't been definitively answered in the books got sorted out on the show: 1. Did Jon Snow "warg" into his direwolf after getting stabbed? (Nope.) 2. Is Melisandre a very, very old woman working some powerful mojo to keep herself looking spry? (Yep!)

While either or both of those theories may still be in play in the books themselves, we won't know for sure until Martin releases The Winds of Winter (date still improbably TBD). But what about the countless other theories whipped up by book fans over the years that could still possibly get worked into the show? As we prepare for episode two, let's run through the most intriguing fan theories -- batshit crazy though some of them may be -- that could conceivably still happen on Game of Thrones.

More: What 'Game of Thrones' Actors Did After Their Characters Died 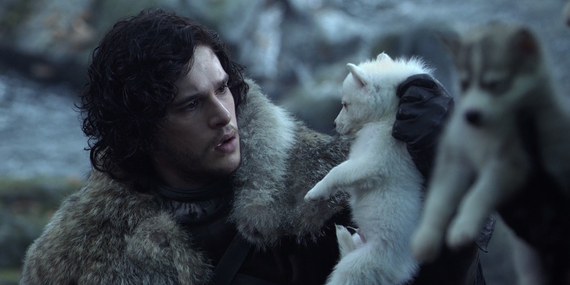 Jon Snow is the son of Rhaegar Targaryen and Lyanna Stark, aka R + L = J
Many hints have been given in the books and in various HBO episodes that Jon Snow is not, in fact, Ned Stark's bastard son. This well-known theory posits that the seemingly slain Lord Commander of the Night's Watch is the offspring of Ned's dead sister Lyanna and her dead paramour (and possible secret husband) Prince Rhaegar, who was the heir to the Iron Thrones and also a much-older brother of Daenerys.
Plausibility: Almost certain. Among hardcore Martin fans (Martinheads?), R + L = J is essentially assumed to be true, and this looks like the season we'll find out one way or another; thanks to set-watchers and casting-call listings that would seem to confirm that elements of this theory will finally be tackled, possibly via flashback as soon as episode three. If true, this would mean that Jon Snow is the half-nephew of Khaleesi. A spinoff theory, A + L = J, points to a more sinister lineage: that Lyanna was raped by Rhaegar's deranged father, King Aerys II Targaryen -- an unpleasant possibility that would make Jon Snow the half-brother of Daenerys. 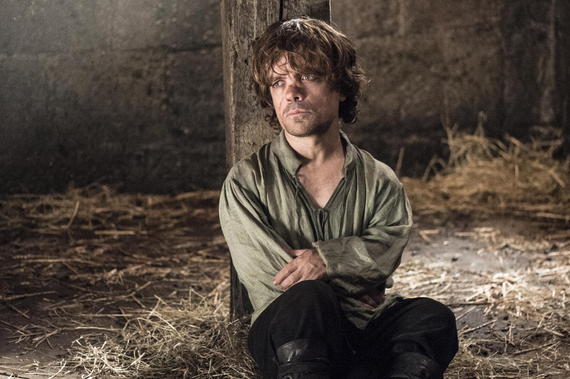 Tyrion is a secret Targaryen, aka A + J = T
R + L = J opened the floodgates for potential secret Targaryens hidden across the Game of Thrones universe. In Tyrion's case, the theory goes that Mad King Aerys either had an affair with or raped Tywin Lannister's wife, Joanna, during Tywin's tenure in King's Landing as the Hand of the King. This prompted Tywin to break with the king and return to Casterly Rock, where Joanna subsequently perished during childbirth as Tyrion entered the world.
Plausibility: Very possible. The Tyrion-as-bastard theory would go far to explain why Tywin had no love for Tyrion -- and add more impact to Tywin's dying words: "You're no son of mine." The theory also lends more depth to Tyrion's meet-up with Daenerys last season, since, like Jon-Daenerys under A + L = J, it would make them half-siblings. 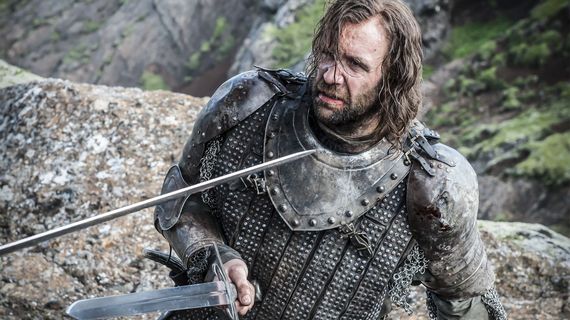 The Hound is still alive and he's digging graves on the Quiet Isle
Did Sandor Clegane die after his battle with Brienne at the end of Season 4? While his surrogate daughter with behavioral issues Arya Stark left him behind to rot, we never saw him expire. In the books, the questing Brienne (who doesn't confront the Hound in Martin's version...) sees a gravedigger while making a pit stop at the religious enclave on Quiet Isle -- a huge, hooded man who'd recently taken shelter there in search of a simpler life. The Hound's ornery horse, Stranger, is also seen in the stables. But Brienne doesn't put two and two together.
Plausibility: Possible! Rory McCann was spotted staying at a hotel near the Belfast set back in August, and Ian McShane will appear in an upcoming episode as a character who matches the general description of another Quiet Isle resident. If true, strap in -- it just might be Cleganebowl time (see below)! 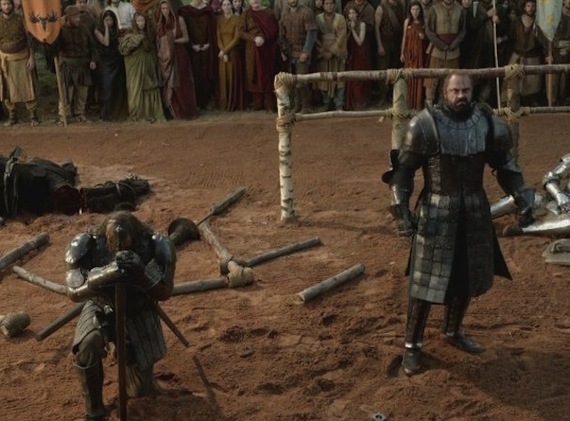 The Hound and the Mountain will fight to the death, aka Cleganebowl
If Cleganebowl supporters get their way, the two nefarious Clegane brothers will square off in a deathmatch, allowing the Hound to seek retribution from his sadistic sibling for the childhood face-burning that scarred him. The most thought-out version predicts that Cersei, put on trial by the High Sparrow, will choose trial by combat and name Ser Robert Strong as her champion, which will prompt the High Sparrow to summon a certain towering gravedigger from the Quiet Isle (see the theory above).
Plausibility: Unlikely. Given that the Hound hasn't been re-introduced yet and the first season-six trailer made it seem like Cersei won't be going on trial (Cersei: "I choose violence"), it's hard to imagine the Cleganebowl hype materializing this season, despite the Rory McCann sighting. But maybe it's being teed up for next year? Regardless, don't let any of this stop you from watching this amazing fan-created Cleganebowl video. Get hype. 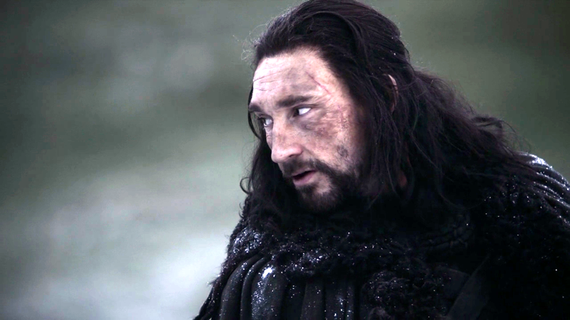 Benjen Stark has turned into a mysterious character named Coldhands
Remember Benjen Stark? Of course you do. Benjen, Ned Stark's younger brother, was a man of the Night's Watch who mysteriously disappeared early on in the first season, never to be seen again. Fans have long since believed him to be every single mysterious figure seen north of the Wall (and, nonsensically, some way out in Essos), chief among them Coldhands.
Plausibility: Maybe! The show has thus far avoided adapting the most mysterious book character of them all, but there is still plenty of time to craft a shocking return for good ol' Benjen. Considering that Benjen's name was teased to get Jon Snow to come out of his room in the season-five finale by the stabby mutineers who ended the Lord Commander's watch, we know that the showrunners are acutely aware of Benjen fever. Could he be that cloaked figure swinging a morning star in the woods in the season-six trailer? 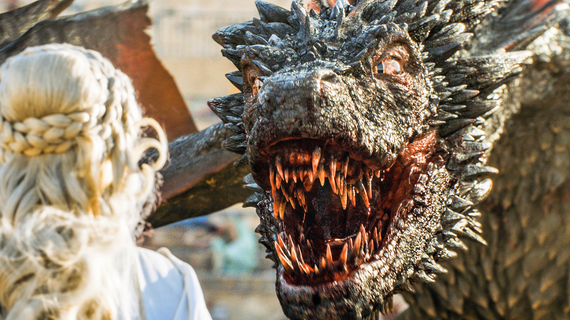 The dragon has three heads, aka there will be three dragon-riding Targaryens
Fantasy fans love symmetry. The House Targaryen sigil consists of a dragon with three heads and "the three heads of the dragons" is also one of the clunky metaphors that pops up throughout the book series. In the season-two sequence at the House of the Undying, the Mother of Dragons is informed that she'll have to share her children eventually. If her chosen steed is Drogon, who will ride his fire-breathing siblings, Rhaegal and Viserion? It stands to reason that they'll have Targaryen blood, right?
Plausibility: It could happen. In scenes for this week's episode and in the season-six trailer, Tyrion is shown attempting to visit the two dragons locked up in the catacombs of Meereen. Could he be one of the three riders, per A + J = T (see above)? We've already told you about R + L = J -- is Jon Snow the third rider? The wildcard in this theory is Bran. He isn't a Targaryen, but he does possess the ability to "warg" into other sentient beings, as he's done with his direwolf and Hodor. And quoth the Three-Eyed Raven to Bran, back in season four: "You'll never walk again, but you will fly." By "warging" into a bad-ass dragon maybe?

To find out which 7 other fan theories could still happen, get the full story at Thrillist.com!