Many textbooks that briefly describe the history of mathematics and physics leave you with the impression that progress in these fields is achieved through a direct march to the truth. People working in these domains, however, know that nothing can be further from the truth. The road to discovery is often a zigzag path, bedeviled by blind alleys and false starts. The last couple of weeks have provided two excellent examples of the tortuous process mathematicians and physicists have to go through, to confirm a major breakthrough.

About three years ago, the respected Japanese mathematician Shinichi Mochizuki posted a 500-page proof of the famous "ABC Conjecture." In very simple terms, this 25-year-old conjecture states that if you have three positive integers a, b, and c, such that a + b = c (which gives the conjecture its name), then if a and b are composed from large powers of primes, then c is usually not divisible by large powers of primes. For instance: 32 + 81=113 can be written as 2 × 2 × 2 × 2 × 2 + 3 × 3 × 3 × 3 = 113, and 113 is a prime itself. The conjecture is thought to have significant implications for other mathematical theorems.

Unfortunately, Mochizuki's proof involves a new branch of mathematics that he has created ("inter-universal Teichmuller theory"), and most mathematicians find his approach impenetrable. Two weeks ago dozens of mathematicians attended a workshop at Oxford, aimed at clarifying the proof.

This resulted only in further frustration, as no conclusion as to the validity of the proof emerged. The situation has not been helped by Mochizuki's refusal to leave Japan to lecture about his proof. This represents a new paradigm of progress in mathematics, in which claimed proofs lie in a limbo of uncertainty.

A different scenario was presented by the recent announcement from the Large Hadron Collider (LHC; the world's largest particle accelerator, near Geneva), of a very tentative discovery of a new particle that is about 800 times heavier that the proton (Figure 1). Two separate experiments, ATLAS and CMS, saw an excess of events above the background, indicating a potential particle decaying into two photons. The statistical significance of the results of each one of the experiments is still rather low, but the fact that the excess has been observed in two independent experiments has generated great interest. 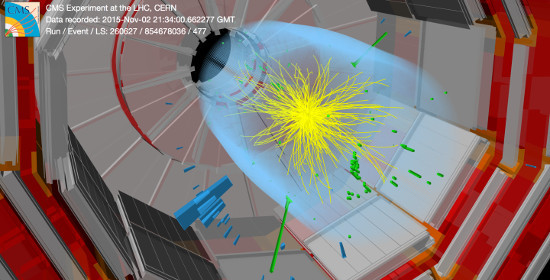 Figure1. Particle tracks from the CMS experiment, showing two photons that could represent the decay of a particle with a mass equivalent of 750 GeV. (Credit: Thomas McCauley, CMS, CERN.)

The good news in this case is that when the LHC resumes operations in April 2016, additional data will either help confirm the detection, or show it to be just another statistical fluke. The reason for the excitement is that if this new particle truly exists, this will represent the first experimental evidence for the existence of subatomic particles beyond the "Standard Model" of particle physics, opening the door for new physics.

The bottom line from the above two examples is clear. The path to major discoveries is never a straight line from A to B. The two stories can also be encapsulated by the known maxim: "extraordinary claims require extraordinary evidence."