After nearly three decades of Reaganomics in which the wealthiest two percent have grown exponentially wealthier while middle class wages have remained stagnant, a growing faction of super rich Americans is seriously pissed off -- and their Wingnut Revolution is upon us.

Sure, the interests and influence of the wealthiest two percent make them more responsible than most for the free market policies that created this current economic crisis. But if there's one thing we've learned about those responsible for this recession, it's that the concept of accountability is about as foreign as their live-in au pairs. Instead, they're trying to pin this on Barney Frank and a legion of "losers" (read that: working class minorities) even though Ben Bernanke himself has debunked this myth.

But accountability (a "day of reckoning" as President Obama called it) is underway in the form of the president's housing proposal, his healthcare plan and, naturally, the recovery act. At the end of the day, ninety-five percent of Americans will benefit from what amounts to the largest tax cut in American history, along with increased access to affordable healthcare and millions of new jobs.

Though, alas, the super rich will have to pay slightly more in taxes.

So they're gathering in their secret war rooms in the Orange County underground and on the floor of the Chicago Mercantile Exchange, grinding the tips of their Salvatore Ferragamo Pregiato Moccasins into razor-sharp spears and fashioning their Bentley key fobs into makeshift nunchucks in preparation for a supremely ridiculous rebellion led by a cast of far-right characters more freakish than the acid trip monsters from Yo Gabba Gabba.

At the vanguard of this Wingnut Revolution is CNBC's Rick Santelli. You've probably seen the video of his public conniption fit already, so we'll skip right to another example of Santelli's economic prowess.

Remember back in September when John McCain famously doomed his campaign by suggesting that the "fundamentals of the economy of the economy are strong?" Well, several days earlier, Santelli told his CNBC audience, "I think the economy is healthy." This was September 2. Fourteen day later, Lehman Brothers collapsed.

I'm beginning to think John McCain got a bum rap. He wasn't alone. It turns out that one of the spazziest of the spazzy white guys from the financial cable shows was suggesting the exact same nonsense. In fact, here's a convenient chart of the Dow proving why Rick Santelli is nothing more than 2009's answer to the Star Wars Kid: 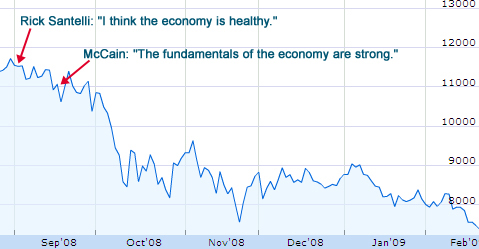 That's one healthy-looking economy. Now, economists will tell you that the Dow isn't totally indicative of the broader economy, so just to be fair to Santelli, here's a chart documenting job losses during various recessions with Santelli's quote marked accordingly: 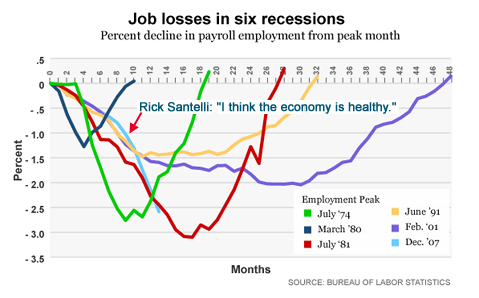 If Santelli and his fake lightsaber of economic awesomeness is the loudest voice of the revolution, then the foot soldiers in the coming revolt are being mustered by Michelle Malkin and Joe the Plumber. The Pajamas Media people have organized something called The American Tea Party. This is absolutely real:

America is on the brink of another revolution. In a new American Tea Party, citizens across the USA are beginning to protest giant government programs that reach deep into their pockets.

Did you notice their slogan? "Uncle Sam - Get out of my wallet!" Get out of our wallets and pockets, Uncle Sam, and crawl into our wombs, where you belong.

The Pajamas TV team including Michelle Malkin, Glenn Reynolds, and Joe Wurzelbacher (aka Joe the Plumber) - are mobilized to help cover this new and evolving revolution.

Evolving? With Joe the Plumber (aka Cartoonish Prop) involved, they're clearly starting at a hairless proto-wingnut stage of evolution.

Yes, the original Sons of Liberty risked their lives in order to protest against monarchical tyranny. The Pajamas Media revolutionaries on the other hand...

You will need to determine from local authorities if a permit is needed for your particular event.

Revolution! But get a permit first. You know: a permit for the revolution.

Then there's Glenn Beck who devoted an entire show to gaming out how exactly a revolution would take place here. He dubbed the special episode the "War Room" and it involved in-depth analysis from a team of experts who agreed that an army of survivalist "bubbas" might take up arms against the "communist" Obama government.

Now, before any cable news conservatives fire off angry missives to the Huffington Post editors, allow me to underscore that I'm not exaggerating Beck's communist accusations here. For the last year or so, Glenn Beck has been attempting to peg Barack Obama and the Democrats as actual communists, and now he's going all out with, quite literally, a red scare segment on his show -- festooning his set with Soviet flag graphics, a "Comrade Update" logo and a Russian language crawl in the lower-third of the screen.

I never thought someone would materialize on FOX News Channel who could actually make Ann Coulter and Bill O'Reilly seem reasoned and rational, but Glenn Beck has done it. To eleven. Watching this "Comrade Update" video, I'm beginning to think that Rick Santelli and Michelle Malkin are on the very serious end of the wingnut spectrum with Beck and, perhaps, Michele Bachmann on the opposite crazy flank -- jars of their own urine lined up along the wall as they assemble enemies lists while reviewing moon landing footage frame-by-frame to see if they can spot a boom mic.

But all of this silliness tends to overshadow the very basic fact that these self-anointed revolutionaries have all along sought to derail and defeat the largest tax cut in American history; going so far as to define the recovery act containing this historical tax cut as socialism and "porkulus."

What this far-right movement appears to suggest is that middle class tax cuts, job creation and affordable healthcare -- ideas that are supported by 82 percent of Americans, by the way -- are criminal acts of tyranny, and an eventual tax increase to the tune of pennies on the dollar for the wealthiest two-percent is worthy of opposition by revolutionary means.

Okay, well. Good luck with that, wingnuts. But don't forget your permits.