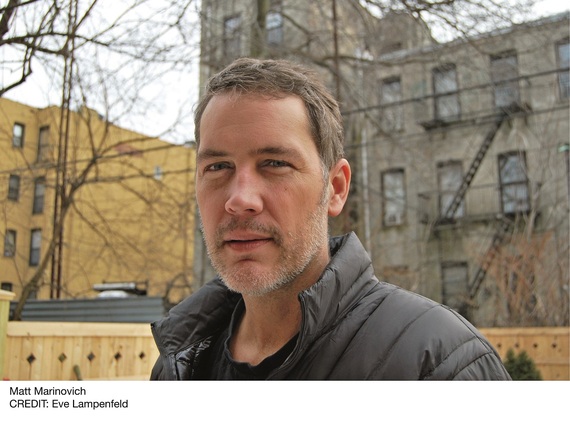 Matt Marinovich worked as an editor at various magazines, and his writing has appeared in Esquire.com, Salon, Quarterly West, the Mississippi Review, and Poets & Writers, among other publications. His first novel was Strange Skies.

The Winter Girl, his second novel, finds Scott and Elise, a young married couple, living in a house owned by Elise's father who is in the hospital, dying of cancer. While Elise spends her days at the hospital, Scott becomes fixated on the summer house next door. The lights are on a timer, and after a while, with Elise visiting her father at the hospital, Scott decides to break in. Excited by his minor crime, he convinces Elise to join in his adventure. Their transgression leads to a horrific discovery, and the couple is soon spiraling down a path of portentous decisions and shocking revelations.

Both The Winter Girl and Strange Skies are told by unreliable narrators. Will you talk about that?
Both novels are written in the first person. My favorite type of narrator is unreliable. For me, it's a bit boring when a narrator is being completely honest. For a suspense novel, an unreliable narrator adds another dimension for the reader of not knowing what will come next. The character telling the story might be truthful or might be inventing fiction. In a novel, the narrator should be able do just that.

I assume your preference has to do with your view of human nature and the tendency to deceive.
Absolutely. I might add there's a sympathy dial with readers; mine is usually turned down pretty low -- without making my characters unlikable. I think many people have more bad qualities than they expose to others, and I want that duplicity to come out in my writing. So, my protagonists are unreliable and have a 'bad' quality to their characters.

Both Strange Skies and The Winter Girl involve young married couples and their reluctance to have a baby. Tell us about that.
I have two beautiful daughters. I'm very happy to have had them. Having a child is one of the most dramatic things that can happen to your life. You go from being someone with free time to wondering if you can find the time to deal with all the responsibilities of being a parent--whether it's dealing with homework or the pressure from the kids to get a dog. Having kids completely changed my life. At first, I thought it would ruin my fledgling writing career, but it turned out to be just the opposite. The birth of my first daughter made me feel more creative, not less.

What's your writing process like?
I write each morning for three or four hours. After five cups of coffee, I'm good-to-go. I make sure I do at least some writing every day. With a novel, if you miss a day -- if you don't write even a hundred words -- you can lose touch with the story's pace. You need to keep up with the rhythm by writing each day.

Do you plot or plan a novel or fly by the proverbial seat of your pants?
I'm definitely a fly-by-the-seat-of-my-pants method guy. I find it's far more exciting to write without knowing what's coming next, just as in life. It's like walking out the door, not knowing what awaits you. It's spontaneous. Also, if I don't know what's coming next, the reader won't either.

Who are your literary influences?
Raymond Carver has been a big influence. When I was in graduate school at Emerson, he was the writer I most enjoyed reading. My favorite short story of his is "Fat." I was just blown away by its merciless quality. It didn't resolve itself neatly at the end. It left the reader with a degree of discomfort. I love the fact that his stories leave me begging for a more satisfying ending, one that doesn't tidy up everything. I also love reading all the great Russian writers -- Tolstoy, Dostoyevsky, and the others.

You mentioned writing every day -- even it's only one-hundred words. Do you ever suffer from writer's block?
I used to, but not anymore. I know this may sound like an infomercial for writing, but even if I end up writing a hundred words -- the worst stuff I could possibly write -- it's important to have written those words. If it's terrible writing, I can revise it all the next day. When you see the blinking curser, the worst thing you can do is just sit there.

It's just as bad is going on the Internet and wasting time.

You've got to write, and one day's bad writing isn't going to kill the novel.

You mentioned wasting time. How do you deal with the nearly universal tendency to procrastinate?
I'm definitely a procrastinator.

Writing is a very lonely profession. You can do anything you want. It's not like there's a boss standing over your shoulder. Just like athletes have a routine before each game, a writer can be helped by having a routine to get to the starting gate.

After my morning oatmeal and coffee, I'm ready to get to that gate. There are some days when it feels like it's just a job -- when it's hard work.

What has surprised you about the writing life?
The promotional aspects of writing have been surprising. With my first novel, I ended up on some strange radio shows. One was a call-in show to a Howard Stern knockoff guy in Buffalo. It was and interesting experience, but very weird. As for the book itself, I was surprised at my anticipatory anxiety about reviews of Strange Skies. It received fine reviews on Kirkus and Booklist, but some other reviews were mixed. I have fairly thick skin and never thought the review process would be as stressful as it was.

What do you love about the writing life?
I love communicating with people. If I lived on a desert island, I don't think I would write. I love connecting with people and getting responses from readers.

What would you be doing if you weren't a writer?
I used to be a drummer in a band. If I had the talent, I guess I'd love to play in a rock band.

Congratulations on writing The Winter Girl, a beautifully crafted psychological thriller with twists reminiscent of an Alfred Hitchcock film.