Impressive scenes of frozen lighthouses and arctic-like icescapes draw visitors to the shores of the Great Lakes each winter. This winter wonderland, however, can prove lethal to the uninformed visitor, and one should approach with extreme caution.

In recent years, more and more people have been visiting the shores of the Great Lakes to witness firsthand the beauty of winter. The lakeshore in winter is amazing - like an arctic mountain range seen from high above. The beaches are transformed into miniature mountains made of ice, piled up by the wave action of the lakes.

The frozen mounds on the eastern shore of Lake Michigan often rise 15 or 20 feet above the surrounding surfaces. They are created when waves crash into the floating ice that collects along the shore and then re-freeze. The shelf ice, as the name implies, forms like a shelf, and is not attached to the bottom of the lake, but only to the shore. The massive ice shelf, in effect, floats on the surface of Lake Michigan. The ice certainly appears stable, and solid, yet this is deceiving. Cracks, thin spots, faults, and holes are often intermixed with the mounds, and hidden by drifted snow. 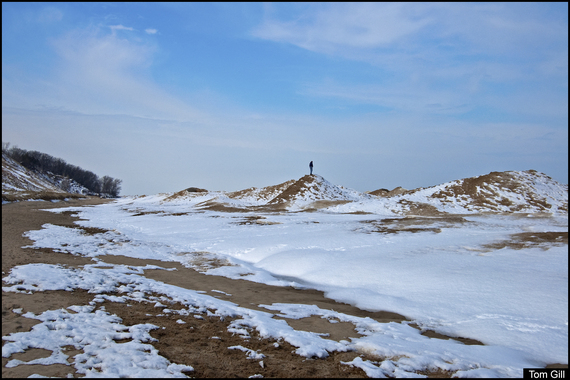 The pounding water undercuts the edges of the ice, and the underside is not a consistent thickness, but riddled with air pockets. These defects create shafts which lead directly to near freezing water below the ice. Any visitor who risks venturing onto the dangerous shelf could easily fall through a shaft, to the frigid water below, and face deadly consequences. There is no way for a person to climb back up a long, slippery ice shaft. The shafts can be three feet in diameter and over 15 feet deep, leading to the unbearably cold water below. It's difficult to breathe when unexpectedly immersed in very cold water due to the shock of the fall, and contracting muscles. Even worse, many people instinctively inhale or gasp the instant they hit the icy water. This is referred to as the cold shock response, and if the head of the person is beneath the water at the time of submersion, he or she will inhale water and quickly drown. Once through the ice, and into the water, chances are, a person will be swept away from the shaft by the moving water. In this situation where the ice is so thick, it can also be completely dark beneath the shelf. The sides of the shaft are slippery ice, and feet cannot touch the bottom of the lake.Without ice climbing gear, there is little chance of climbing out. Furthermore, when a person falls through an ice shaft, quick rescue is nearly impossible, and the mission may become one of recovery. 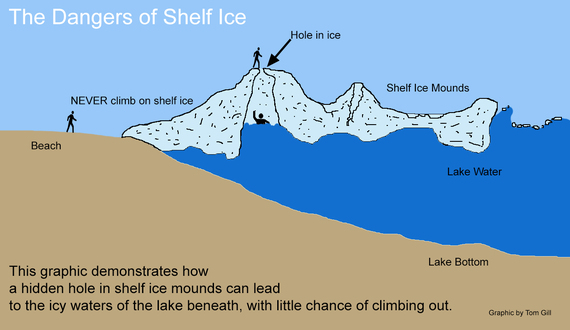 Holes such as the one shown in the two photos below, are created by the water splashing up through the ice, and are often hidden by a thin layer of snow or ice. This particular hole was created early in the season, during very high winds, and was over water only a few inches deep, so it was not dangerous for us to go near it. 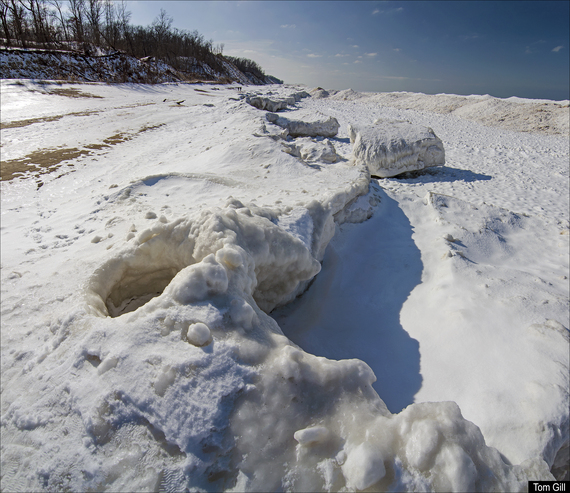 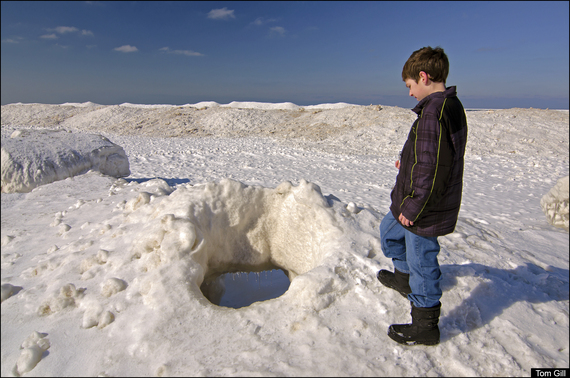 Visitors crave the best view of the frozen lake, and these mounds seem like the perfect way to gain a fantastic vantage point. However, most visitors to the lakeshore in winter do not realize how deadly a walk on the ice can be. 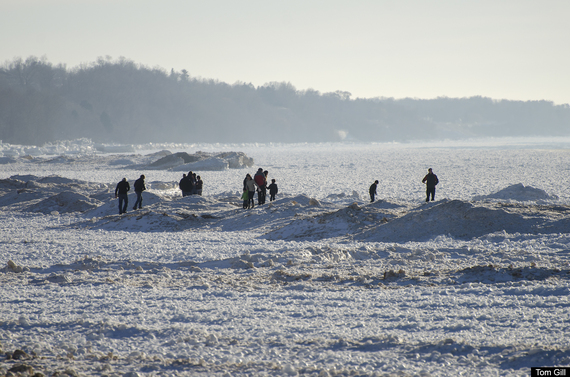 The people shown in the photo above are probably 200 feet offshore on Lake Michigan, where the depth of the water could certainly exceed 8 feet. If they were to fall through the ice, they would have little or no way to escape. Even a quick rescue response may prove futile. Falling off the edge into the water could also prove fatal.

The image below shows how thick the shelf can be. Notice it was not mounded here, and appeared as a natural extension to the beach. This visitor may not have known he was standing over Lake Michigan. It's important to know the area prior to exploring it in winter. 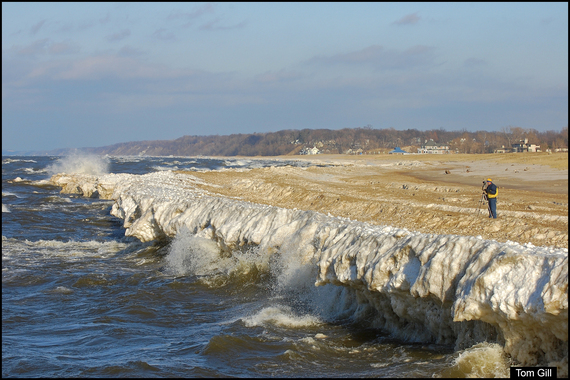 Ice on shoreline structures is another hazard. Walking on a frozen pier or seawall is also not advisable. One slip leads to the icy, cold water where hypothermia can set in quickly. Drift ice on the lake surface would only make matters worse, as one could not surface among the large sheets of floating ice, and self-rescue could be next to impossible. The frozen surface I often encounter when walking out to photograph the outer lighthouse in St. Joseph, Michigan, is shown below. With nothing to hold on to, one slip can result in an unexpected plunge. 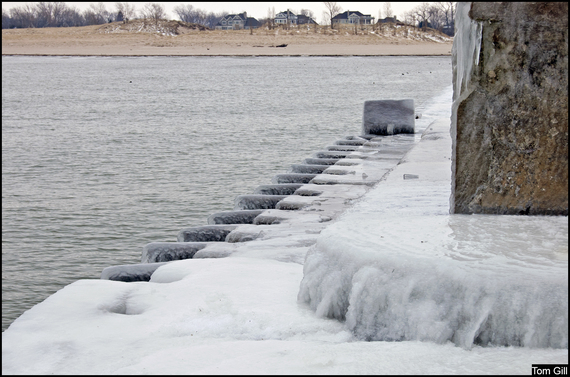 If your winter plans include a visit to the frozen shores of the Great Lakes, enjoy the spectacular scenes from a safe distance. Stay on the shore, and away from any slippery surfaces near the water. And never, ever walk on the shelf ice. It's beautiful, but potentially deadly.