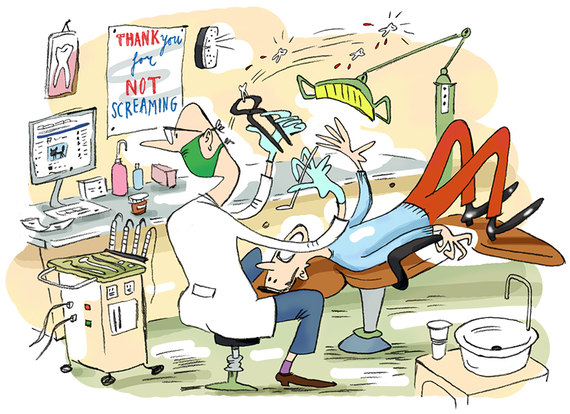 The dentist glances at my son's annual X-rays and then, without looking, plucks a business card from a tall stack on his desk.

"They are out of place," he says. "There is not room in his jaw for so many teeth. If they keep growing, they will ruin his other teeth. Within the next three months, you should make an appointment with the dental surgeon." He hands me the card. "His name is Doctor L. I can recommend him. He's been doing it for 30 years. "

"Excuse me?" I ask. But my son knows exactly what is going on. Most of his friends in his class have already had their wisdom teeth pulled.

Wisdom teeth in America are like tonsils used to be in the Netherlands. All of them get taken out, and sooner or later it is your turn. My brother and I went there with my mother. I still remember every detail of the vivid nightmare that the anesthesia gave me. Hovering above my throat was a fiendish doctor with a hedge trimmer who cut off my tonsils and triumphantly held them up to show me. Once we got home, my brother and I lay cozily together on the big bed. We got as much ice as we wanted and sucked lemonade from a straw. That softened the raw pain in our throats.

Dr. L. works in a small strip mall on the highway. We do not have to wait long to see him. "Two or four at a time?" he asks my son, barely after we have met. "Four is better. That way you only go once under the knife."

My son looks crestfallen. "Will I be able to eat afterwards?" he says.

"Of course not," said the doctor. "Full anesthesia or laughing gas?"

My son looks at me quizzically.

"Nitrous oxide is better," says Dr. L. confidently, "especially if you are afraid of needles."

"Nitrous oxide then," says my son, a little uncertainly.

Dr. L. now begins in a nasal voice to rattle off the risks of the operation, all while checking his email. I catch on: loss of sensation in the lips and tongue, sometimes permanently, infections, bleeding. I step outside and call my dentist. "Is this really the best oral surgeon in town?" I say.

"That's why I refer precisely to Dr. L." he says cheerfully. "He does nothing but this procedure, thousands of them. He has made it an art form."

Ten million wisdom teeth are pulled each year in America. There are twenty-seven thousand a day, twenty per minute. Dr. L. is booked solidly for the next six months. But because he has a cancellation, he can take my son today.

Soon there he is, my tough son, with two penicillin pills already in his stomach.

"My friend Kyle had a lot of pain," he says. "He could not play football for a week. He kept bleeding. Katelyn had to return because a piece of bone was wandering out of place. "

Then the doctor quiets him down without further ado by clapping a tube with nitrous oxide over his mouth. Fifteen minutes later, it's all over. I'm shocked when I see my son's swollen and bleeding mouth. But when he sees my horrified face, he breaks into gales of laughter.

"It was very, very crazy there, Mom, " he says, between his tears of laughter. "I received eight injections with huge needles. He kept chopping. It seemed like he cleared out my brains. "

The whole class comes to visit the next day, carrying gallons of ice cream and balloons. For the rest of the week my son will remain at home. Stretched out on the bed, groggy from the painkillers, he licks his favorite ice cream.

The wisdom ritual. Actually quite cozy.