There's not a stitch of clothes for sale at Madam Malkin's Robes for All Occasions. Not yet anyway. And the shelves at Borgin and Burkes are still bare as well.

But none of that matters. Even though The Wizarding World of Harry Potter - Diagon Alley is still basically a construction site, there's really only one word that describes this soon-to-open addition to the Universal Orlando Resort. And that word is magical.

Though visitors to Universal Studios Florida will have to wait 'til Summer before they can then grab a cone at Florean Fortescue's Ice-Cream Parlour or discover what's hidden in the shadows of Knockturn Alley, a few lucky reporters and bloggers got to go behind those five-stories-tall London facades which shield this new "land" from prying Muggle eyes yesterday. And while onsite, they also got the chance to talk with key members of Universal Creative. Who have been working with Warner Bros. Entertainment on this USF expansion ever since The Wizarding World of Harry Potter - Hogsmeade first opened over at Islands of Adventure back in June of 2010.

"Seriously, Hogsmeade had only been open a week when we first began talking with about ways we could possibly expand the Wizarding World," recalled Thierry Coup, senior vice president of Universal Creative. "I mean, we'd had such a great time working with Stuart Craig and the production team from the Harry Potter films. And there was so much more to the world that J.K. Rowling had created which was worth exploring. So we just had to revisit this property."

Mind you, when it came to deciding which elements should be included as part of Wizarding World - Phase Two, Thierry and the crew at Universal Creative had a lot of feedback from passionate Potter fans to work with.

"It was actually kind of funny. These people would first tell us how much they loved what we'd done with Hogsmeade, how authentic we'd made the place look and feel," recalled Thierry Coup, senior vice president of Universal Creative. "But then -- with their very next breath -- these Potter fans would then begin talking about all of the other things from the books and the movies that they wished that we'd included as part of the Wizarding World. Places like Diagon Alley and King's Cross Station. Or how they didn't just want to get their picture taken in front of the Hogwarts Express. But -- rather -- they wanted to get on that train and go for a ride."

And what was Coup's response to comments like these? "Just wait." 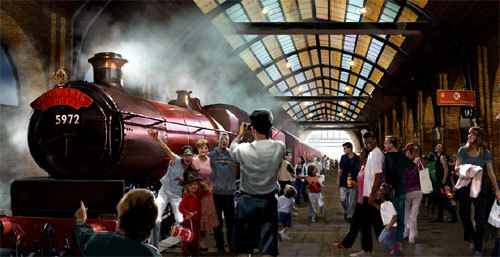 Well, that wait is now nearly over. Though construction of The Wizarding World of Harry Potter - Diagon Alley only began in June of last year, hundreds of hard hat workers are on site right now speeding this project towards completion.

And you have to understand that -- when it comes to this expansion of The Wizarding World -- this is very much a group effort when it comes to the Universal Orlando Resort. So while Dale Mason -- who's a VP of Creative Development at Universal Creative, not to mention being the executive art director for the entire Wizarding World -- is inside of the Leaky Cauldron making sure that this restaurant / pub looks just like it did in the movies ("There's not a real brick in this entire place," Mason enthused. "Everything you see in Diagon Alley is either modeled fiber glass, steel or carved concrete"), Steve Jayson -- the Executive Chef for the Universal Orlando Resort -- is somewhere else working behind-the-scenes. Either by designing the kitchen for this new dining facility or by working on the menu. As Steve and his culinary team try and put their own spin with some authentic English dishes. Which Jayson hopes will not only please Harry Potter fans but J.K. Rowling herself.

"We're supposedly going over to Scotland in April to present all of our new menu items to Ms. Rowling," Steve explained.

But between now and then, there is so, so much work that still needs to be done. Take -- for example -- each of the facades within Diagon Alley. Every one of these building fronts first has to be painted and then have its graphic treatments applied. And once that work is done ... Well, because this super-secret Wizards-Only shopping and dining district is supposed to be hundreds of years old, teams of effects artists then have to go back into Diagon Alley and artificially age up the place.

"You have to understand that there's supposed to be no technology from the modern day Muggle World back here. Diagon Alley is really set in Victorian times. So the streets are lit by gaslight and the buildings are all supposedly heated with wood and coal," Mason said. "Which means that -- in order to make this place look authentically old and grimy -- we then have to go back in and speckle this place with lots of artificial soot." 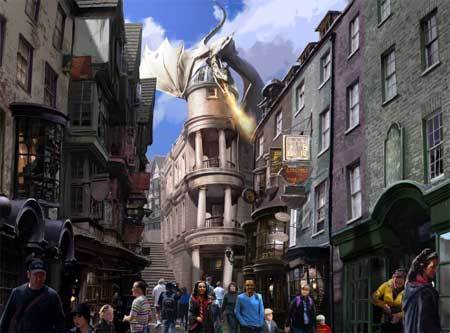 And it's not just those little touches that Universal Creative is striving to get right. There's also Diagon Alley's big main attraction, "Harry Potter and the Escape from Gringotts." Which is this ambitious coaster-like attraction which will recreate one of the more memorable moments from "Harry Potter and the Deathly Hallows - Part II." Not to mention that full-sized recreation of the Hogwarts Express. Which will carry Universal Orlando visitors from Diagon Alley over to Hogmeade (or visa versa) and provide them views of London and the English countryside. Not to mention a few other surprises along the way.

And speaking of surprises ... There's a lot more that Universal Orlando has yet to reveal about the world's first centrally themed, multi-park experience. So if you'd like to stay on top of what's going on with Diagon Alley as well as hear about the changes that are coming to Hogsmeade, then you might want to go check out the brand-new version of The Wizarding World of Harry Potter website.

Just keep in mind, though, that the magic is about to go global. There's a version of The Wizarding World of Harry Potter that's nearing completion at Universal Studios Japan (In fact, Thierry Coup will be flying over to Osaka later this month. Where he'll then spend ten days straight riding that theme park's version of "Harry Potter and the Forbidden Journey" as Thierry fine-tunes this high tech thrill ride). Not to mention the Potter-themed project that's about to rise on the Upper Lot at Universal Studios Hollywood.

"But what's great about all of these other Harry Potter-themed things that are going into Osaka and Hollywood is that they're all going to have their own unique elements. Things that you can only see and experience if you go to that specific theme park," Coup concluded. "Like Diagon Alley and Hogsmeade. The only place that you'll get to experience this version of The Wizarding World -- which is all tied together with its very own working version of the Hogwarts Express -- is here at the Universal Orlando Resort."