Iraq was once a source of hope and food. After World War II, Herbert Hoover stopped in Baghdad on his famous tour to rally food supplies to stop famine.

Hoover came to Iraq seeking food for other nations in dire need. Hundreds of millions were at risk of starvation in Europe and Asia.

Today, Iraq is devastated by war and hunger. They are desperate for help.

Najat, an Iraqi mother, is one of millions forced from their homes and villages by the ISIS terrorists. She depends on the help of the UN World Food Programme (WFP) to feed her children.

Najat lost her husband in the conflict with ISIS. She recently told a WFP officer of her despair:

"Time has stopped for us. There is no work, no schools and no future. We receive WFP food rations every month. Without this help I would be begging for food."

WFP is feeding over a million hungry Iraqis. These are innocent civilians who have fled for their lives after ISIS stepped up attacks all over Iraq last year.

Only WFP has saved these war victims from starvation. Many of these are women and children. Partner agencies that distribute the food include Action Against Hunger, Norwegian Refugee Council, Save the Children, Mercy Corps, UNICEF and Barzani Charity Foundation. 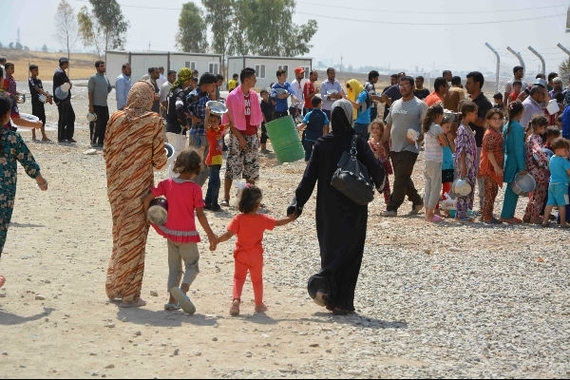 But the UN food agency sent out grave warnings this week. The humanitarian situation in Southern Iraq is reaching critical levels.

Many of the hungry are living in abandoned buildings. They have lost all their resources. Host communities in Iraq are feeling the strain of taking in so many new people. So they depend on aid from WFP and other agencies.

Reaching these areas is a dangerous mission for WFP, going through conflict zones. Funding is another issue too, as WFP relies on voluntary donations.

Significant donations have come through from Saudi Arabia and others. But this is an ongoing war with no end in sight. Humanitarian needs will continue to grow. Donations will need to keep pace. Otherwise, WFP may be forced to reduce rations for Iraqis if the international community does not contribute enough.

The war is blocking access to some cities and towns. WFP said last week the besieged city of Haditha in Anbar governorate has been cut off from food aid since October.

WFP can only wait for their opportunity to bring food to the hungry. For children, it's critical because they can suffer lasting physical and mental damage from malnutrition.

UNICEF and WFP have rapid response teams to move food quickly to newly liberated areas of Iraq. Plumpy'Doz, which treats child malnutrition, is an enriched peanut paste given to children.

Even when an area does become liberated, it doesn't just bounce back to before the war. Homes and factories lie in ruin. Water and utilities are not working. Food production has been destroyed. So considerable aid is needed for people to eat and rebuild.

Iraq is going to live with the threat of hunger and famine as long as the war continues. The international community has to help them with donations. Somehow a peace must emerge. We must try to give hope and support along the way. But only Iraqis themselves will ultimately win the war and the peace.

See also my interview with Chloe Cornish of the World Food Programme in Iraq.