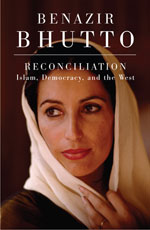 As someone who knew and respected Benazir Bhutto ever since we were in college together, I cannot write an unbiased review of her new book, Reconciliation. But because I feel that it is an extraordinarily important and beautiful work, I'm pleased to take up Arianna's offer to comment upon it here.

The book, completed just before her assassination this past December, is both an intensely personal and a profoundly intellectual assessment of Islam and its relationship to the West. Her own journey began in the village of Lukana, as the daughter of a strong-willed man who would become Pakistan's prime minister. "When I reached the age of puberty, my mother asked me to wear a burqa," she writes. "Suddenly the world looked gray. I felt hot and uncomfortable breathing under the confines of the cloth. My father took one look at me and said, 'My daughter does not have to wear the veil.'"

Bhutto goes on to recount the inspiring story of how she took up her father's mantle as leader of the Pakistan Peoples Party, after he was deposed and executed, and went on to become, from 1988-1990 and 1993-1996, the first woman to lead a Muslim country. Interwoven with the personal tale is a vigorous historical and intellectual defense of Islam as a religion that is, she says, based on tolerance. "Islam is committed not only to tolerance and equality but to the principles of democracy," she writes. "It is a religion built upon the democratic principles of consultation (shura); building consensus (ijma); finally leading to independent judgment (ijtihad)."

The subjugation of women in many Muslim countries, Bhutto contends, is a perversion of the Quran. "The Prophet Mohammad accepted women as equal partners in society, in business, and even in war," she writes. "The Quran elevates the status of women to that of men. It guarantees women civil, economic, and political rights."

There are many who might dispute such characterizations of Islam, including both its most ardent adherents and fiercest critics. That is why Bhutto's book is so important. She marshals evidence from the Quran, from history, from a survey of society in Muslim nations, and from her personal life to paint a picture of what Islam can and should be. In making her theological arguments, she was helped by her wise friend Husain Haqqani, a scholar from Pakistan now a professor at Boston University. Another dedicated friend, Mark Siegel, a political consultant in Washington, was instrumental in editing and researching the book.

Bhutto's defense of Islam does not extend to how it has been manifest in most countries where it is the dominant religion. "There are unfortunately only a few clear democratic success stories," she notes. The courage that she exhibited throughout her life is reflected in her book's critique of the way politics is practiced in much of the Islamic world today and her unflinching prescriptions for reform.

To those, in both the West and the East, who believe that a clash of civilizations is inevitable, Bhutto offers a reasoned alternative vision of what the world could be like. And she wraps it in a personal tale that should inspire readers everywhere. Both her vision and her personal courage are made all the more poignant, and all the more important for people to appreciate, by her tragic murder.

In the spirit of full disclosure, let me note that I gave a blurb for the book at the publisher's request. My endorsement was deeply felt. This is a powerful personal narrative by an astonishingly brave woman. It's also a brilliant manifesto for challenging radical Islam.