What can I say? The title of the book makes me giggle.

Whenever I tell Gwen that the title amuses me, she looks at me as if I've just called Canada the 51st state or let out a very large, wet belch.

I just think there's something funny and awkward about the title. Not about breastfeeding. Breastfeeding is the bomb. It's dope.

Breast milk is beyond science. We have yet to fully understand it, and we will certainly never reproduce its equal in a laboratory. It is a mystery, like quantum physics and black holes and the appeal of Bikram yoga. It is God manifest in the material world. I get a bit fired up about breast milk.

Here are some of the wondrous perks of breasts. I mean breast milk.

The first milk that comes out after baby is born is called colostrum. Colostrum contains gentle laxatives that help baby poop out the meconium. It contains probiotics that set up the proper flora in the baby's gastrointestinal tract and is higher in protein than ordinary milk. Colostrum also contains antibodies to protect the newborn against disease. These antibodies set up the infant early on with a healthy immune system. They contain the combined disease prevention protocol of mama. And when mama gets a fresh cold, she passes her newly-created antibodies to fight that cold right to her baby. When my wife was nursing, she'd be thrilled to get colds so she could give this gift to our son. She'd be in tears of joy.

Every mammal produces colostrum for their babies. It seems so sacred to me, a special bond between mom and newborn baby. In Southern India they sell a special sweet cheese made from cow colostrum. When I first read this I literally choked back a vomit, and then I realized that it was no different from cheese made from regular cow milk. New things can seem so scary.

Breastfeeding bonds mama and baby. There is no better soother or TLC than a nice, warm nipple. Visualize this. You've had a tough day of learning to use your fingers. You're frustrated after the fifteenth time you dropped the ring that dangles above your head. You're craving some touch. Well, now, there's that warm soft fleshy mama who smells so good. The warm nipple that fits just perfectly in your mouth. And the milk, oh, the milk, let me tell you! Delicious. And you always fall asleep after drinking it. Ah, sweet ambrosia. 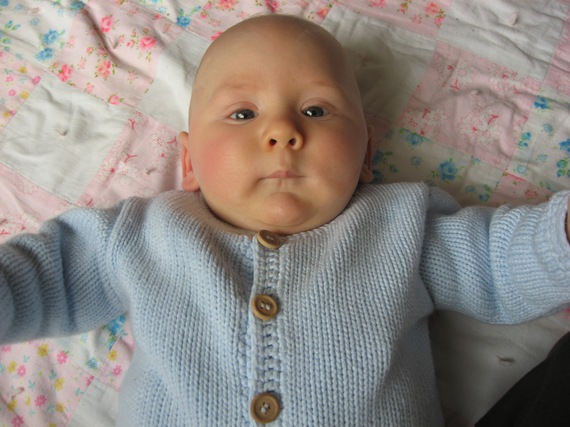 Breast milk is a panacea. Studies demonstrate that breast-fed children are less likely to develop juvenile diabetes, multiple sclerosis and heart disease, and mothers who breastfeed are less apt to have osteoporosis later in life, are able to lose weight gained during pregnancy more easily and have a lower risk of breast, uterine and ovarian cancer.

I bet when you read that list just now, you were like, "less likely to develop multiple sclerosis, yup, heart disease, (yawn) yup, osteoporosis, yup, lose weight more easily... wait, what? I'm in!" We live in a strange culture.

Breastfeeding generates hormones in mama that battle baby blues and is far cheaper than buying formula. Breast milk also cures chapped nipples and lips and fights baby acne, and the list goes on. I suspect that it could loosen tight lids and finally get my car door to stop squeaking. But Gwen is always so hesitant to try these things.

My friend Jenny was worried that her breasts were not large enough for nursing. All breasts are, by the way, but she was really concerned. This must be some urban legend like getting pregnant from sperm in bath water. But during pregnancy a woman, any woman, gets real big. Jenny did get pregnant and in, like, three months, she went from Mila Kunis to Sofia Vergara, but without the accent.

There are hard times. Pain, clogged ducts, infection. For these, our midwife taught Gwen to use cabbage leaves. And they worked. More than once, Gwen sent me out to the market for a head of cabbage. She'd take a large leaf and cup it over the affected area. Have you ever heard of the doctrine of signatures? It's the idea that herbs and plants in nature give us clues by looking like what they help. Well, all I can say is that a cabbage leaf looks an awful lot like a breast. It even has veins and a nipple bump.

If supply seems low, get help. Whatever the problem, be it pain, infection, or simply fear, ask for help. Midwives, doulas, breastfeeding support groups and La Leche League educators can help. You are not alone. I promise they have seen the problem before, and I promise they will help. They are true experts in The Womanly Art of Breastfeeding.

Excerpted from the new book Misadventures of a Parenting Yogi ©2014 by Brian Leaf. Published with permission of New World Library http://www.newworldlibrary.com

BRIAN LEAF is the author of Misadventures of a Parenting Yogi. Visit him online on facebook at www.facebook.com/Misadventures.of.a.Yogi.

author of Misadventures of a Garden State Yogi