Over the course of centuries, years and moments that have run out and define us as individuals with an important part in the history of the humanity and the societies, the separation of the genders had been definite enough to mark our life and pathway. The powerful and weak gender is not any longer a fact. After countless years of brutal oppression that women had to stand, keeping them aside, the progress and arousement of some was the ignition for them to be in favor and be distinguished by their major qualities. Thus, with the success of the "weak gender," strong parts had been conquered in the global community, contributing as a counterbalance agent in the social performs.

However, having a glance at the era of the "perfect means and confused goals," in our days of changes, we can discern that there are still societies which live anachronously, without the slightest change in the woman's status from the depth of the centuries. I mean the world of Islam, where religion holds an important part in people's life, shaping characters, education and culture as a general modulator of everything, even today some people want the woman oppressed and subjugated. Technology and evolution touches only areas relating to improving their current life. The woman with blinders remains the obedient body of a father's domination, or later of a husband's who will buy her as his bride for a negotiated price depending on the social status.

That was also my experience when I married into a mixed marriage of east and west. I received all the oppressive deficits of a system of an inhuman religious culture targeting to unbrace my mental being, to degrade me, to operate in total submission, the complete debasement and trivialization of my human dignity. With the final goal of splintering of my personality, busting the human gender and transforming me from an intelligent being to an "object." First decorating, then as a procreation machine and then the final rejection, were the basic causes which made me revolt in my way, submitting myself in unspeakable hardships, in order to keep tight struggling as it was imposed by the separating human factor from the other species of creation.

We cannot disregard the status of the native women who live as genuine "products" of their human oppression who effortlessly accept their degrading part not only because they are not aware of anything different but also they are wet-nursed and accept the imitation of the brainwashing for their role. Women neither have any right to claim and demand as they have never been taught anything different, they have to embrace the trivialization of their personality because they are just "women" and have no right to make decisions nor to take initiatives that most likely would confute their presence reconsidering their status. A way of life positioned between religion and a phallocratic population of men which exists without any interest for women but only to reinforcing the status of men. It is not a matter of blindly following the religion as it is a matter misreading it, unbracing women more and more as beings of a lesser God. A family is not considered gifted when they have girls! Living their slavery from their birth, simply this is their fate, having already been adapted not to demand and claim but as dubious beings shaped to be, they stand "in the corner," preys of their man's decision who dominates and possesses their lives.

Alexandra Symeonidou is a best selling author in Greece and has published 10 novels, translated three French theater plays from old French to Greek and two childrens books. "Nightmares in the Saudi Arabian Desert" is her autobiography and her first translation from Greek to English. It is available on Amazon.com. 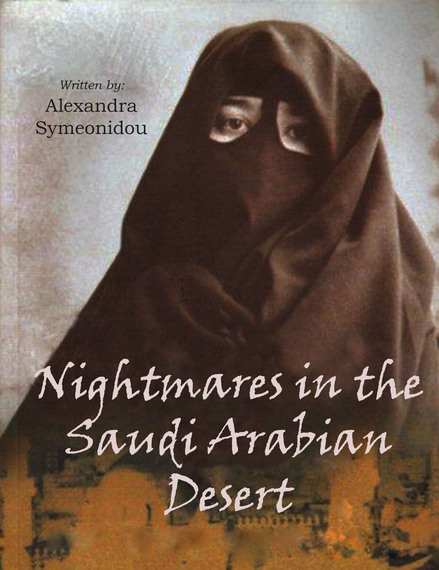