The following illustrates the story of merely five items from the left side of my desk. 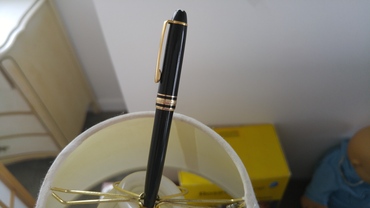 This is a $500 gold-plated MontBlanc pen. I have no business owning this item but it rocks. To give extra "coolness" to the item it once belonged to Brad Pitt.

Mr. Pitt left said item in a limousine in Las Vegas. The limo driver gave it to his boss who is my brother's girlfriend. She presented me the pen because I write.

How cool is that?

Mr. Pitt (sorry, bro, finder's keepers) used this pen to play Sudoku on an IPad (at least in the limo). There is no additional information about how he used the pen.

But, if you play around with words, like Mad Libs style, you can say:

Fill in the blank.

Notice the conjunction of the the words "pen" and "is" to appreciate this linguistic game.

Brad Pitt's pen is in my mouth.

Brad Pitt's pen is leaking all over the place.

You get the gist. It's fun. 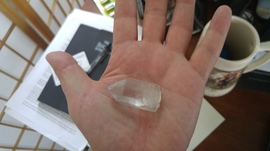 In 1994 I "ground-scored" this smoky quartz crystal at a Grateful Dead concert in Deer Creek, Indiana. The stone was literally on the ground in the middle of a corn field. I have no idea how I found it. I like to think it found me.

I recall wandering around the parking lot in a bit of a haze when deciding to walk into the corn fields which surround the venue in Deer Creek. I stopped to urinate and that's when I found this rock.

I keep in my pocket when anxious or nervous, when doing public speaking events, on airplanes. It's my good luck charm. When I die, it will be by my side in the coffin. 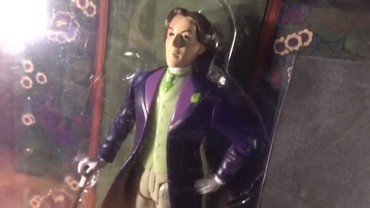 My friends laughed at me and walked in a different direction. That cemetery is really big. Eventually I asked for directions to Morrison's grave but before that I randomly stumbled upon Oscar Wilde's grave at which a single rose lay.

I stayed there for awhile.

At the time, I was not familiar with Wilde's work or biography.

He's one of the best writers of all time and a personal favorite.

It was his grave that the vibrations led me to. 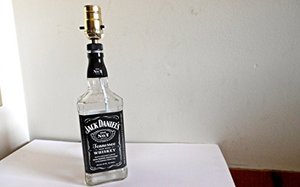 This lamp was once a functional bottle of Jack Daniel's me and my brother drank in a single night of debauchery in Ft. Lauderdale about twenty years ago. It was a house party and blurry and filled with pretty women and all sorts of other things. My brother transformed it into a functional lamp years ago and presented me the lamp for my birthday. The lighting rocks. I love lamp. 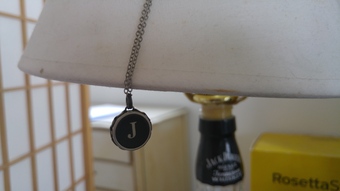 This is the least interesting story.

It's merely a letter "J" from a Victorian typewriter.

Nobody special owned the typewriter (as far as I know).

Nobody special gave it to me. It's just a letter "J" because that's my name.

And this has been the wonderful story of five things from the left side of my desk.