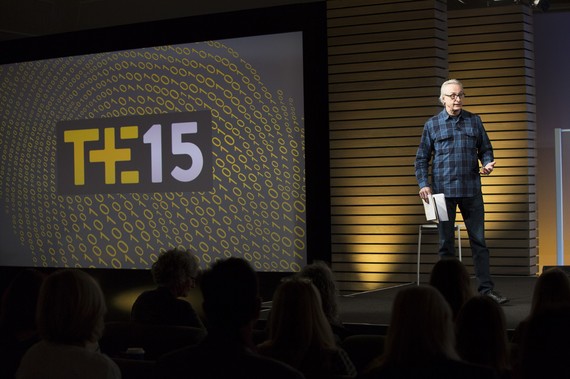 There aren't many technology conferences in the world where you can have breakfast with a chief economist of a large global conglomerate, learn from a serial entrepreneur over lunch, chat with a prominent venture capitalist over a glass of wine, and have a fireside chat with influential entrepreneurs and businesswomen. Add a panel on virtual reality moderated by Mary Lou Jepsen, executive director of engineering at Facebook, a conversation with John Chambers, executive chairman of Cisco, and you can see why this small conference is one of the best that the Valley has to offer.

This year's conference took place at the Ritz-Carlton in Half Moon Bay and I was privileged to participate in this intimate setting that hosted business leaders, entrepreneurs, scientists, thinkers and investors from all over the world. Speakers included John Chen, CEO of BlackBerry, McKinsey's James M. Manyika, Marc Benioff, CEO of Salesforce, Penny Pritzker Secretary, U.S. Department of Commerce, Steve Jurvetson of DFJ, and Sean Parker, who served as Facebook's first president. Hosted and moderated by David Kirkpatrick, founder of Techonomy, the conference organizers paid attention to every small detail.

Certainly it was great to listen and learn from these established leaders, but the real value of Techonomy is bringing together leaders from different various backgrounds to illuminate the way forward in this technology-driven world.

I asked Arati Prabhakar, the head of DARPA, how nation states will deal with this rapidly accelerating software revolution, and her answer that it is complicated, indicates how difficult our most important questions are going to be. During her lecture, she had emphasized how important it is to evaluate the human choices over how many technologies are being used.

"Those who get left behind will be completely disrupted," John Chambers argued, "If you don't move quickly, you'll be left behind." He criticized that American leadership is not doing enough to embrace digitization.

John Chen explained how Blackberry would catch up with the current technology giants by focusing on its core business: digital security. He emphasized that we need to look at how tomorrow's trends, instead of trends that are already well underway, are developing. "Don't fight over the current market," he said. "It's about what the future looks like."

"The CEOs of the future will talk about how companies create more equality," Benioff also shared, emphasizing how equality needs to become a core value for all companies. "Why isn't every CEO committed to ensuring men and women are paid the same?" he asked the audience.

When I asked Deborah Gordon from Stanford how biology can inform governments, she said that as a society we need to realize that central control isn't always the best choice. In her lecture, she said that central control can be expensive and isn't always the most effective. In her research, she is studying algorithms of ants and learns how those insights can lead toward building a better society. Not surprisingly, ants face many issues that we do, as well, for example, how resources are distributed.

Rangu Salgame, CEO of Tata Communications, shared a lesson on leadership. "My style of leadership is about empowering my business leaders, not interfering and yet being engaged," he said. John Chen urged to teach future leaders how to learn to ignore what other people think.

Bernard J. Tyson from Kaiser Permanente explained how his company is staying innovative by taking innovation that works from other companies and incorporating it into his company. For example, by learning from FedEx delivery techniques, he learned how he can serve Kaiser Permanente's patients better on a daily basis.

One cannot but be struck by the immense progress that technology has brought to our world, and the enormous potential that is left to alleviate many of society's problems. At the same time, we need to be careful how we use technology, as it also poses many challenges to we organize society and as individuals live a good life.

Ultimately the many insights, lessons and conversations leave you hungry to learn more about this ever changing world, and show you how little we understand, and how much more we have yet to discover and learn as a society.