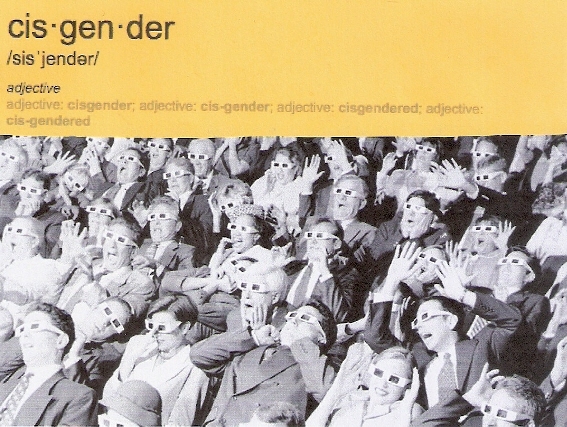 A short while back, I was sent a link to a story about an old mutual acquaintance on a UK website. An hour later, a second link appeared in my inbox: it was to NPR's version of the same story. "It's all over the web," I was told. Jamie Shupe, who had lived in western PA for a short time before moving with their wife Sandy out to Oregon a few years ago, had successfully petitioned their new home state to be legally registered as a third, non-binary gender -- reportedly the first granting of such a petition in the U.S. (a handful of other nations had already made it an option).

After a "Holy merde!" on seeing someone I knew making international headlines, I began reflecting on the future of the male/female gender binary; and before too long my thoughts returned to an idea I'd been mulling over for some time: the important role that the word "cisgender" is playing in our radical rethinking of the binary, and ultimately gender itself.

On first glance, "cisgender" seems an unlikely agent of revolutionary change. The word is a neologism a mere two decades old, after all, and it has gained broad currency only within the past few years, being chosen for inclusion in the Oxford English Dictionary just last summer, for example. And unlike some of its fellow 2015 OED inductees -- the in-your-face "Masshole," or "Twitterati" with its air of blithe jet-setter worldliness -- "cisgender" is, well, a textbook example of stolid, musty textbookese. Moreover, the word is vulnerable to the criticism that it reinforces the binary rather than undermining it, since it denotes someone whose sense of their gender identity conforms to their biological sex -- a girl who is assigned female at birth and vice versa -- someone, in short, who doesn't identify as transgender.

First impressions can be deceiving, however, as the vigorous pushback the word has met with from some quarters since it began seeping into mainstream discourse suggests. The sources of this antipathy are varied: some members of the LGBTQ community have perceived in it an unwanted form of privilege being foisted on them, for example, while some (self-styled) feminists and haters on the right reject the word because it gives legitimacy to the trans condition, the existence of which they continue to deny. The common thread running through these reactions, though, is the sense that the ideas sprouting from or fallow in the semantic patch demarcated by "cisgender" pose a threat to the existing order.

And the truth is: they do.

As trans advocates and allies have pointed out, the primary menace the word poses is to a deeply entrenched form of privilege: the right to think of one's gender identity as "normal" -- and not to give it a second thought. What's at stake here? In the first place, when people who are "gender conforming" insist on their normality, they communicate to those of us who aren't that we're abnormal; and since the word "normal" carries such strong positive connotations -- most people, if asked, would surely want to be classified that way -- its opposite, by implication, carries equally strong negative connotations ("sick," "deviant," "unnatural," "evil," etc.). To describe one's condition as "normal," moreover, is to tacitly assert that it needs no explanation or justification: normality = normative, that which by general consensus should be, a status inherent in the words' common derivation from the Latin root norma, "rule." It's only the abnormal that, because it represents a deviation from what's generally held to be healthy, natural, good (Latin ab-, "away from"), must be accounted for, and accounted for in light of the "normal."

The way in which the word "cisgender" threatens these largely unconscious assumptions is by serving as a simple tool for articulating them. As College of William & Mary English prof Paula Blank succinctly put it in a September 2014 article in The Atlantic, "'Cisgender' suggests a commonality among transgender and non-transgender people...It tells us that we all experience some kind of relationship between our bodies and our selves, whatever that relationship may be." It's the notion of "commonality" that's key here. The word "cisgender" counters the hierarchical, exclusionary, stigmatizing relationship inherent in the binary normal/abnormal with the implicit assertion that none of us can take the "relationship between our bodies and our selves" for granted because "we all experience some kind of relationship." A number of important corollaries follow from this assertion: that being "gender conforming" is its own condition, and not simply the lack of a condition, and thus is in need of being accounted for every bit as much as gender nonconformity is; that what is "normal" is having a relationship to gender, not a particular type of gender identity; as such, that "conformity" denotes a statistical relationship (think of the bell curve), not an ethical choice, and the different manifestations of gender nonconformity are simply normal variations within the universal human trait gender, rather than forms of moral or social deviance.

If this conceptual shift doesn't seem all that seismic, the practical implications that follow from it are shaking some foundations. Most importantly, the stark social, legal, and economic inequities still too often visited on those of us who are gender nonconforming lose any pretense to being mere expressions of the natural order of things. Put another way, firing or evicting us, and in general denying us basic civil rights and protections, can no longer be justified on the grounds of our being a threat to others simply because of who we are. It's this implication that's provoking the strongest pushback, notably in the form of the many "bathroom bills" that have popped up in state after state over the past year. The proffered rationales for these stoopid bills tend to be couched in plain-vanilla coded language like "privacy rights;" but the fears that conservative lawmakers are exploiting to push them through revolve around the thoroughly discredited right-wing fantasy of trans women as sexual predators, the implication being that because of who we are, we must be quarantined, aka made illegal -- the real end game of this legislation.

Fortunately, the changing views about gender conformity and nonconformity are already making it more difficult in a legal context to appeal to such "common sense" positions. By the same token, as the widespread outcry against anti-trans legislation in North Carolina and elsewhere attests, the de-normalizing of gender conformity is enabling more and more businesses to recognize in us potential customers and employees, and more and more people to think of us as neighbors and co-workers -- and ultimately fellow human beings.

These and other sweeping changes, I've argued, inhere in the basic conceptual shift the coining of the word "cisgender" helped bring into focus. For the most part, however, these changes have only begun to manifest themselves, and we continue to face uphill struggles in many areas, notably in our ongoing effort to secure civil rights protections at the federal level (the Equality Act of 2015 having stalled in a stalemated Congress). And then there are all the quotidian changes that will only come with the gradual de-stigmatizing of gender nonconformity: the willingness of our gender conforming counterparts to see us as potential romantic partners (outside the realm of kink), or to mix freely with us in social settings (without our needing to be stealth), or to pass us in the street without feeling the need -- and presuming the entitlement -- to harass us or even just cast disdainful glances our way (as I'm reminded on occasion on my daily walks when my gaze meets the eyes of certain of my neighbors).

I have faith that, barring some catastrophic changes in our societal climate, the seeds in cisgender's fertile semantic field will continue to sprout, grow, and bear fruit. But the full harvest will be some time in coming yet.