For years, theater director and translator Bryan Doerries has led an innovative public health project that produces readings of ancient tragedies for current and returned service members, veterans, and their families as a catalyst for powerful discussions about the visible and invisible wounds of war. His new book The Theater of War: What Ancient Greek Tragedies Can Teach Us Today has been described as "both memoir and manifesto" by Nick Romeo of The Boston Globe, "Extraordinary... Riveting" by James Romm of the Daily Beast, and "not merely one of the best theater books I've read this year... one of the best books I've read this year" by Charles Isherwood of the New York Times. 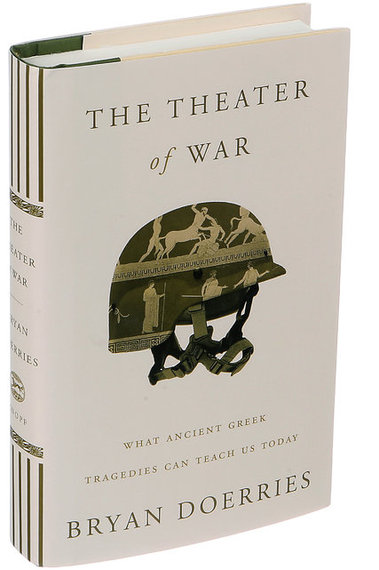 Phil Klay: You write that, after the death of your father and girlfriend, the Greek plays you'd known since you were a child took on a new light--giving you comfort that you weren't "the first person who had experienced compassion fatigue, or who had hesitated to act decisively in the presence of extreme suffering, or who felt ambivalent about helping someone to die, or whose grief manifested itself in a withdrawal from the world." Why is it that this flash of self-recognition proved so important for emotional progression?

Bryan Doerries: After I experienced suffering and death up close, the ancient Greek tragedies that I had studied and translated, and which I thought I knew, all of a sudden, spoke directly to me, as if they had been written for me, or even about me. I found solace in discovering that I wasn't the first person to have felt ambivalence, survivor's guilt, compassion fatigue, or paralyzing grief, and I began to seek relief in the plays themselves. On the surface, it may seem counterintuitive that Greek tragedies can bring relief to those who have experienced trauma and loss, but that's one of the early discoveries that I made, first about myself, and then about the audiences for whom we began to perform, in hospitals, military communities, homeless shelters and prisons. I have observed that when people recognize their own private struggles reflected in an ancient story, they are released from the all-consuming and profoundly isolating thought that they are the only humans on the planet to have felt such emotions.

PK: You write, "tragedy is less a literary form than a blueprint for a felt experience," and you translate your plays in order to drill down rapidly to the core emotions, and then structure your events is designed to bring about audience participation. Compared to a more traditional event, what is lost, and what is gained through your methods?

BD: By stripping away all of the baggage associated with Greek tragedy--the sandals, the sheets, the Victorian diction--and drilling down rapidly on the unfolding emergency at the center of each play, we gain an immediacy and a directness that is lacking from many traditional productions. A veteran's court judge in East Lansing, Michigan remarked that watching the reading of Ajax was like "watching a 747 fall out of the sky and crash at my feet in real time, while not being able to do anything about it." I direct the actors to read fiercely, to aggressively attack the text at every turn. I also instruct them to push the emotions to an extreme that would be inappropriate in almost any other setting, including a traditional production, because that level of intensity would be unsustainable over a full evening. Sometimes what is lost in the equation is clarity of speech and room for the actors and audience members to breathe. But we aren't presenting a play. The reading is catalyst for a conversation that never would have happened had the actors not gone to such extremes. The discussion is the objective of everything that precedes it. For our purposes, I would always sacrifice the words in service of the emotions, because, in our approach, we are trying to uncover and bring forth the impulses behind the words, the burning reason within each character that the words must be spoken. That is what we are translating, and, in turn, what we ask our audiences to translate for us.

PK: You believe that "Theatre is not about holding up a mirror to the audience and saying this is you. I believe in distance rather than documentary." Why is verisimilitude insufficient?

BD: To clarify, I do think that theater is about holding a mirror up to the audience. However, when approaching audiences that have experienced trauma, or when attempting to use a piece of theater to elicit an open, compassionate discussion about a charged or divisive subject, the distance from which the mirror is held can sometimes make all the difference in terms of the audience's response. We have found that distance is one of the most effective tools for creating a safe space, in which people are encouraged to reflect rather than provoked to react. We utilize the cultural and temporal distance, the dissonance, and the ultimate strangeness of ancient texts to create a space where people don't feel defensive. Rather than saying "this is you," as many documentary or more contemporary pieces might, we use ancient plays to ask audiences "what do you see of yourself in this?" We encourage them to forge their own connections across culture and time.

PK: You emphasize the primal, tragic scream, but humor has often been equally valuable to warriors, and some of the funniest books I've read have been war novels. What about the role of comedies?

BD: I couldn't agree more. Military humor is unrivaled in many ways, and no doubt equally healing. Some day I'd like to find a way to incorporate comedy into our performances. The Greeks never presented a tragedy without an accompanying satyr play, which took the high, noble characters and themes of the tragedies and dragged them through the mud, bringing everything and everyone back to earth and parodying the histrionics of the tragic plays. The same actors who played characters like Ajax and Agamemnon would have come back out as these half-men-half-goats driven by appetites and raw id force to do vulgar and, at times, ridiculous things. The satyr plays are full of ribald, vulgar, scatological humor. One satyr play by Sophocles, The Trackers, features an actual shit throwing contest in the middle of the play. I tried staging it years ago in California and we lost about a third of the audience each night, which leads me to believe there might be something there for us to explore. But comedy is much harder to pull of than tragedy and--frankly--I don't feel I have the chops yet to tackle both. When it comes to the ancient Greeks, I'm less interested in presenting their comedies on their own, but in what happens when you slam tragedy and comedy, high and low, sacred and profane up against each other. What would happen if we committed to the fullest extremes of each form, as the Greeks once did? How would the audience respond? What conversation would be made possible, which wasn't possible before?

PK: You have performed for veterans, for prisoners, in homeless shelters, asking Americans to face the darker aspects of our humanity. There is a therapeutic component to this, but it also seems unavoidably political. Is there a tension between art as therapy and art as a more open version of the town hall?

BD: I don't see what we do as therapy. It's a door. A public health campaign. We work at the widest end of the funnel. It may be therapeutic, but the real healing comes afterward, when people choose to seek help, or to help those in need, or both. Also, I don't subscribe to the belief that presenting these plays, in this way and for the audiences we perform, is an overtly political act. The plays are constructed in such a way to resist a single interpretation, and we try to find a way to validate everything that gets said in the audience, no matter how ugly, so as to create a permissive enough space where all sides feel they can speak and be heard. Sure, we've definitely had people try to hijack performances for their own political purposes, but the room usually rights itself very quickly, because--in the end--we aren't simply having a conversation about ethics, values, or ideologies. We are having a conversation that is framed and informed by empathy, shared discomfort, and desire to understand one another, and the reading from the ancient play has somehow made that possible. It's about the opening up of meaning and personal significance, not didacticism, or the closing down of interpretation. Political discourse in the United States has gotten so shrill and reactionary that most "town hall" discussions about challenging subjects quickly devolve into shouting matches. I now feel that if you want to facilitate a productive discussion about something that divides us, start with a theatrical portrayal of human suffering first, and then have the conversation, and for a fleeting moment, people may be open enough to really hear each other.

PK: I wanted to ask you about the conflict you had with the Ethics Committee of a local Falmouth Hospital, which asked you to cancel a reading of the final scene of the Women of Trachis that was planned to be done in the town square. One of the doctors suggested that it might be too much to expose casual passersby to intense drama without their "informed consent." This provoked a lot of pushback from the town. Most people found it ridiculous, but I wonder--is there ever any danger in exposing people who have been through intense experiences to art that might stir powerful emotions? Can art, for the unprepared, be harmful, rather than cathartic?

BD: It's certainly something we think about a lot, and it's why we have mental health professionals and service organizations present at every performance, to help address situations that could arise, but rarely do. As you say, the plays elicit powerful emotions, and some people may not be ready to be confronted with such intensity. But the plays are also only one-third of the event. It's the discussion that follows each performance that helps people who may have been activated or disturbed by the performance to connect with others who usually share or help validate their response. In the end, I hold that the primary and overwhelming reaction we see after performances is relief. People also report experiencing joy, hope, and a sense of connection and belonging. One junior enlisted soldier at an early performance said that he thought Sophocles wrote Ajax "to boost morale." And when I asked him why it would be morale boosting to watch a tragic story about a warrior who loses his close friend in battle, feels betrayed by his command, and ultimately takes his own life, the soldier shot back, "It's the truth. And we're all here watching it together." The hope, the relief, the camaraderie isn't in the tragic plays. It's in the audience that comes together to bear witness to their truth.

***
Words After War is a nonprofit literary organization with a mission to bring veterans and civilians together to examine war and conflict through the lens of literature.