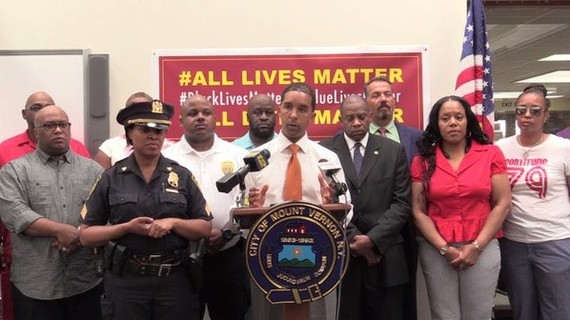 During the past several years, many communities across the country have experienced numerous police involved shootings which resulted in the deaths of unarmed men and children of color. Most of these incidents occurred in cities and towns that are like Mount Vernon. Recently, millions of Americans have viewed news reports and videos trending on social media involving the killings of Alton Sterling and Philando Castile during police encounters. Citizens across the country are outraged that these incidents are occurring too frequently and we urge the Department of Justice to conduct a thorough investigation into Alton Sterling and Philando Castile's deaths.

Following the Sterling, Castile and Dallas shootings, I addressed Patrol Officers of the Mount Vernon Police Department before they started their shift and emphasized to always be professional, treat people with dignity and respect, and rely on their training to deescalate disputes before they escalate further. I also commended our officers for their hard work, dedication, and reminded them that we must learn from mistakes made in other jurisdictions to ensure it does not happen in our city.

As a Black man raising two children with my wife, the shootings of Sterling and Castile is another wakeup call that sustainable changes in modern policing are needed. It is personally painful to have to discuss tragedies such as these with my son at such a young age. The loss of lives during police involved encounters, coupled with national suspicions of no justice, demonstrates why we must change the organizational mindset in our Police Departments and the way we provide police services in communities such as Mount Vernon.

The calculated and cowardly attack on the Dallas Police Department is a terrible stain on our nation's history. Our heartfelt sympathies go out to the families and police officers whose lives were cut short following a peaceful protest.

We cannot allow hate to fill the void of understanding. We cannot allow fear to force us into making emotional decisions. We cannot turn away from confronting a simple truth, that is, change comes with immense challenge. We must hold onto hope and rediscover our spirit of courage to intelligently address issues of race, racism, and violence. We can conquer false perceptions. We will by driving honest dialogues on uncomfortable realities on both sides of the badge.

This is why for the past six months my administration has been working to implement President Barack Obama's "21st Century Police Model" in Mount Vernon. Hundreds of work hours have been dedicated to internal and external meetings with local leaders, faith based organizations, school officials, non-profits, businesses, Councilmembers and police department leadership.

To create a safer environment, there must be trust between law enforcement agencies and the community in which they serve. This is key to transforming our department into one that will keep our streets safe, our families protected and our city secure. We are creating a culture of accountability and transparency and moving the Mount Vernon Police Department fully into the 21st century.

I have instituted a Public Safety Commission made up of our leading community stakeholders, business owners, and pastors to examine the culture of our Police Department and complete the implementation of President Barack Obama's 21st century policing. These leaders understand the challenges we face and I am honored they are willing to devote their time to this important mission.

In Mount Vernon, we are planning ahead and pursuing action based initiatives to strengthen relationships between the police and community. Examples of my administration's efforts to reconnect the police and the people can be seen through our participation in the "Running Man Challenge," the adoption of "Stop & Shake," as well as bringing back fireworks and "PlayStreets" with "pop-up" basketball courts and block parties. Advancing legislation to create a Civilian Complaint Review Board and creating new possibilities for diversity in police leadership are additional components of a stronger governance structure.

Through embracing new ideas and investing in relationship development programs, we will combat racial profiling, provide better training, and deliver a more effective policing model for others to follow. This is the necessary work to build trust between law enforcement and the public to triumph over tragedy and move forward.

About the Author: The writer is Mayor of Mount Vernon, New York. At 33, he is the youngest ever elected Mayor in the city's history, and applying best business practices as earned from NYU Stern School of Business Executive MBA program to local government.