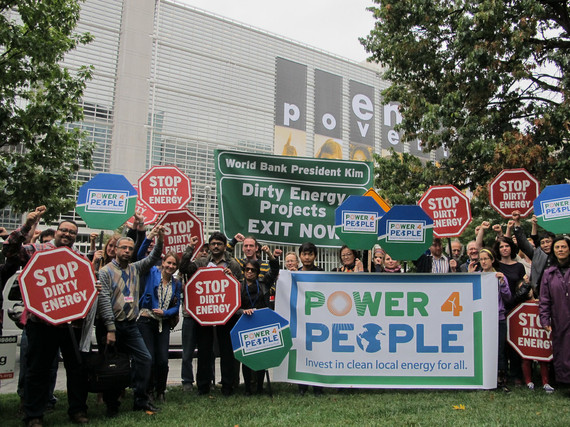 By Peter Bosshard and Josh Klemm

We shall know our prophets by their fruits, and the same is true for World Bank presidents. The first term of President Jim Kim is coming to an end, the Bank's Executive Directors will decide about his re-election in the coming weeks. In the energy sector, the president's harvest has been meager indeed.

Jim Kim's first term coincided with the global breakthrough of wind and solar power. From 2011 to 2015, these technologies accounted for two thirds of all the renewable energy capacity added throughout the world. In 2015, the added wind and solar power capacity for the first time outpaced all other sources of electricity - including fossil fuels and hydropower - combined.

Wind and solar power have not only become cheap and ubiquitous. They can also be deployed quickly, have a low social and environmental footprint, and are effective at reducing energy poverty in rural Africa and South Asia. In other words, wind and solar power are ideal investment opportunities for a development bank.

When Jim Kim took over at the World Bank, he knew that he had to shift his institution out of climate destroying fossil fuels. Yet the new President didn't have the courage and foresight to prioritize emerging renewable energies. Instead, he personally championed the return of his institution to the mega-dam projects which had been popular in the 1960s and 70s.

In early 2013, Jim Kim started advocating for developing multi-billion dollar dam projects on the Congo, the Zambezi and in the Himalayas. Such projects, the World Bank argued, had the "potential to catalyze very large-scale benefits to improve access to infrastructure projects beyond borders." In early 2014, the Bank approved a preparatory grant for the Inga 3 Dam on the Congo, the largest hydropower project which the institution had ever funded. Around the same time, the Bank also increased support for the Kandadji Dam, a large hydropower and irrigation dam on the Niger River.

While the world turned to wind and solar power, the World Bank invested over 60% of its renewable energy lending to hydropower projects in the 2011-16 period, compared with only 23% for solar and 4% for wind power. In the Africa region, hydropower accounted for nearly 70% of all lending for the sector.

Jim Kim's backward-looking bet on mega-dams has not delivered results. The Inga 3 Dam has faced years of delays, and the World Bank suspended its support in July. The Kandadji Dam on the Niger is meanwhile faltering at a spectacular cost. The number of people likely to be displaced has doubled to more than 60,000, and sufficient replacement land for them does not exist. The thousands of people who have already been displaced have not found new livelihoods, and the cost of the project keeps rising.

The mega-dams on the Zambezi and in the Himalayas which Jim Kim has championed have not moved forward either. After years of waiting, the governments of Mozambique and Zambia are now considering developing wind and solar farms instead.

In conclusion, Jim Kim's embrace of mega-dams has resulted in thousands of people displaced and millions of dollars wasted for no apparent benefit. Just as importantly, millions of poor people are still waiting for access to modern energy services while their governments' scarce capacity has been absorbed by boondoggles.

This appalling waste of livelihoods, resources and time would not have been necessary in that Jim Kim arrogantly disregarded the lessons of past experience when he re-engaged the World Bank in mega-dams. The report of the independent World Commission on Dams found that complex multi-purpose projects had the highest cost-overruns among all types of dams. Even before taking on Inga 3, the World Bank experienced vast time and cost overruns in rehabilitating the Inga 1 and 2 dams, an infinitely simpler undertaking at the same location. And after a critical evaluation of the experience with large-scale irrigation projects, the director of the Bank's Agriculture Department warned in 2006 that the institution would only support such projects in Africa again "over his dead body."

The World Bank's member governments need to critically evaluate Jim Kim's track record when they elect the institution's future leader in the coming weeks. We cannot afford a president under which the Bank has to relearn the lessons of the past every ten years, at a huge cost to the world's poor.

Peter Bosshard and Josh Klemm are a senior advisor and policy director at International Rivers, respectively.