Over the last two years, the Bank has been reviewing its environmental and social safeguard policies. The review process presents an important opportunity for the Bank to adopt best practices for promoting low-carbon and resilient development by establishing strong policy language on climate change. Nonetheless, a draft of proposed new policies does not address climate issues systematically.

Despite the Bank's urgent warnings that a warming world poses great risks to its development objectives, the Draft only mentions climate change sporadically, and fails to clearly articulate what borrowers will have to do to assess the climate impacts of their projects, or how climate change will affect their viability. Only very limited and inadequate climate assessments are envisioned in the new policies. On top of this, the largest loophole of all is that the proposed policies will not apply to nearly half of all Bank lending, since they explicitly exclude policy lending which is set to overtake traditional project finance in the coming years.

On many public occasions, President Kim of the World Bank has called on governments world-wide to give climate change the attention it deserves as the single largest threat to any human development. The draft of Bank's new policies, cleared by the Board of the institution for public consultations, proves that the Bank has failed to walk the talk on climate. According to President Kim of the Bank, this was supposed to be the year for climate action. The climate action his institution is taking, however, will serve as a dangerous precedent to the world by showing how to avoid acting on climate.

The Draft of new Bank policies contains only a generic requirement that the impacts of projects on climate change be assessed, with no details to guide the scope of assessment or the implementation plan. Critically, the Draft does not require that impacts on the resilience of host communities be considered. Through its new proposed policies, the Bank will start accounting for Greenhouse Gas (GHG) emissions of some of its projects, but the policies stop short of requiring GHG accounting for all Bank projects and they do not require the quantification, or even the consideration, of environmental and social externalities. Furthermore, the Draft does not specify how the information that is collected on GHG emissions will be used and for what purposes. 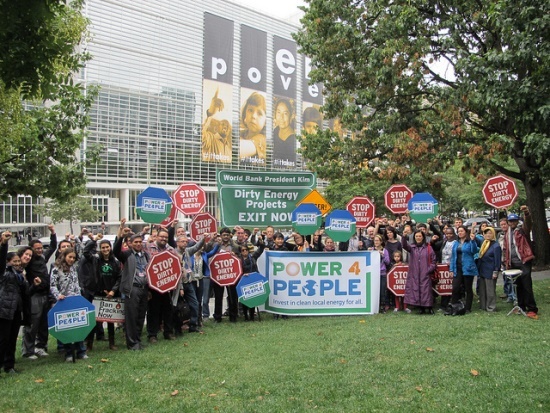 While the Bank has recently highlighted the significant quantifiable economic and development benefits of taking even modest action on climate change, it is borderline hypocritical that the Bank's own core operational policies do not match this analysis and messaging. As such, the proposed policies need to be reviewed to properly address the true needs of communities and the planet vis-à-vis climate change. The World Bank's new policies should require the use of transparent planning and assessment tools to ensure that the Bank's activities are as low-cost, low-carbon, pro-poor, and sustainable as possible. They should specifically require borrowers to assess and manage (a) the climate-related risks facing supported projects and their resilience to those risks; (b) the impacts they will have on the climate resilience of local communities and ecosystems; and (c) the effects of the project on efforts to mitigate climate change.

The new policies of the Bank are expected to be ready for a final approval by the Board of the World Bank sometime next year. President Kim has all the time and resources he needs to live up to his promises given to Civil Society Organizations that he would take into account their suggestions for a strong policy on climate.

An institution that sees itself as a vanguard of social and environmental sustainability should strive for the highest standards. The world's poorest, supposedly the "beneficiaries" of World Bank projects, should not have to settle for displacement, violation of human rights, environmental destruction, and exacerbation of climate change in the name of "development." During one of his many public presentations, President Kim said, "In 20 years, all of us will be asked the question, 'What did you do to fight climate change?'. The leaders..., both from the private sector and from governments, have in their power to act in substantive ways. Now is the time to act for future generations before it is too late." Now we ask him what he is going to do today to fight climate change. His time to act is now!