On International Human Rights Day, Walk Free and International Labor Rights Forum, both members of the Cotton Campaign coalition, projected striking images of Uzbekistan forced labour onto the headquarters of the World Bank in Washington D.C.

Why? Because the World Bank is providing more than $500 million in financing to the government of Uzbekistan for agricultural projects, despite the government's use of systematic forced labour to harvest cotton.

We want the Bank to see the impact of the modern slavery system on the lives of average Uzbek citizens forced to work hard and long hours in the cotton fields under the threat of penalty, and this protest shows the World Bank that they can no longer ignore the question of complicity through the projects financed by their loans. 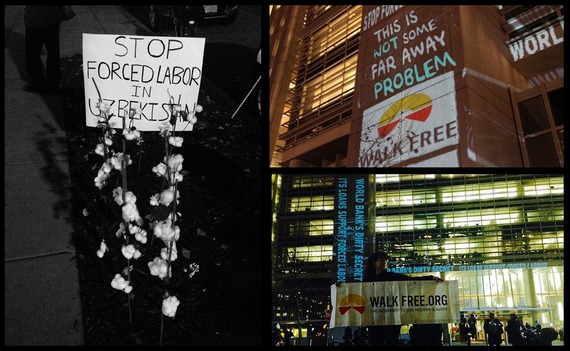 Activists gathered outside the Bank's headquarters in Washington D.C. at nightfall to watch as award-winning artist Robin Bell lit up the side of the Bank's building with a set of striking images and videos as World Bank employees left the building having finished work for the day.

"The projection drew lots of interest and I was pleased to have the opportunity to educate people about the truth behind Uzbekistan's agricultural industry - that it is underpinned by modern slavery and financed by World Bank funding" said Alex Monroe, Senior Campaigns Manager.

It still shocks me that every year in Uzbekistan the government's insists on forcibly mobilising its citizens in order to raise revenue from the cotton harvest. The government operates the world's largest state-run system of forced labour where pensioners are forced to pick cotton or submit 50% of their pension; students are threatened with expulsion if they don't take part; and healthcare is undermined for two months every year due to the mass mobilisation of teachers and doctors.

This year, the Uzbek authorities have gone to great lengths to keep its use of forced labour secret by claiming the mass mobilisation is voluntary. We know this is not the truth. The Uzbekistan police have repeatedly arrested and physically beaten Uzbek human rights activists who are risking their lives to monitor and speak out on the use of forced labour in the cotton fields.

Thanks to the actions of brave monitors on the ground, the Uzbekistan government's dirty secret is out.

Despite this evidence of widespread forced labour in World Bank project areas by independent human monitors, backed up by a recent report by the International Labour Organization, the Bank has so far refused to suspend the projects. And this is after the World Bank has pledged to suspend its loans to Uzbekistan if forced labour is found.

Uzbekistan's actions are in strict violation of international law and the government's own stated commitments to end its use of forced labour, and now the international community must recognise their complicity in its actions. 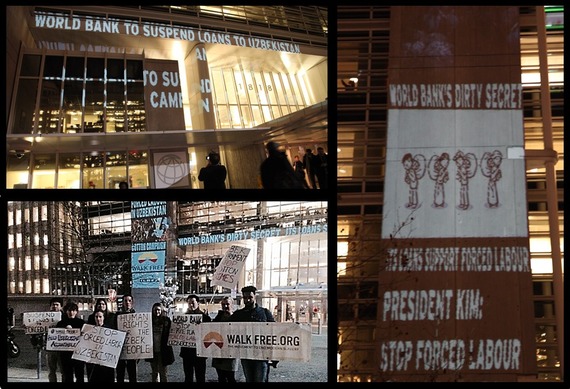 The international public have thrown their support behind this demand, with close to 100,000 Walk Free supporters signing the petition urging World Bank President Jim Yong Kim to suspend World Bank loans to Uzbekistan.

The message that modern slavery is unacceptable is watered down when it comes with a cheque for millions of dollars. With our protest outside the World Bank building we remind the World Bank that they cannot allow loans to propagate this illegal practice.

The World Bank should take responsibility and suspend payments to the government of Uzbekistan, and leverage reinstatement of project financing to incentivise the Uzbek government to reform the root causes of forced labour.