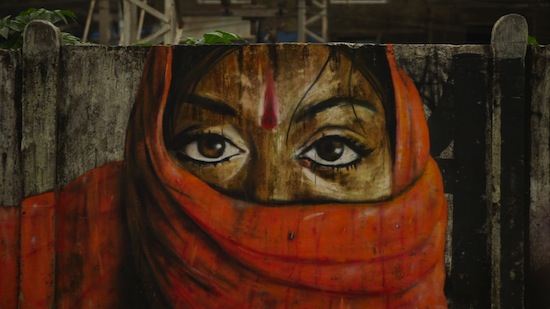 As a teenager, I heard Jamaican dub poet Mutabaruka declare that being a woman means belonging to the largest minority group in the world. It's a statement that has colored my upbringing and changed the way I look at gender relations, in my travels throughout the Arab world and South Asia, and at home here in the West. Do I read more into the issue because I hear his jarring words as a constant mantra of inequality? Probably. But even as a self-declared non-feminist, if I thought for a moment that our struggle as women within this society was a thing of the past, I would be deluding myself.

In The World Before Her, Canadian-based filmmaker Nisha Pahuja explores the opposing views and experiences of contemporary Indian women, in and around the maximum city of Bombay (Mumbai). She takes the audience on a thorough voyage into the apparently contradictory worlds of the glamorous Miss India contest and the militant Durgha Vahini camps run by a Hindu fundamentalist party. The result leaves the viewer at once empowered and enlightened, yet spotted with a heavy dose of doubtfulness.

Pahuja, who declares her own ideal of elegance is her mom "because of all the hardships and struggles she went through so I could be the woman I am today," managed unequaled access to the Durga Vahini (meaning "army of Durga," who is the Indian Goddess of Victory of Good over Evil) camps. But it did take her two years just to get inside because the Vishwa Hindu Parishad, who run the camps, have a press office designed to basically discourage all media requests. Regardless, Pahuja points out that through luck, chance and Prachi, one of the subjects in her film, she found a way in by "avoiding the right people!"

As difficult as the camps were, filming what goes on behind the scenes of the Miss India beauty pageant proved the biggest challenge. "It was a nightmare," Pahuja points out, "so I lost hair and ate." What Pahuja regrets most is "missing out on process and real story," meaning what she felt at not being able to follow the stories of some of the girls from beginning to end, telling the human tale behind their attractiveness and well poised quotes. The organizers of the glamorous event kept interrupting, whisking the girls off to this rehearsal, or that fitting, considering the film crew little more than a nuisance, bulky and in their way. 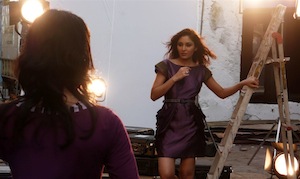 Even through these challenges, the stories that emerge out of the pageant are touching and insightful. The Rajastani Ruhi Singh, with her emotional parents rooting for her, the 2009 Miss India winner Pooja Chopra, who says the contest took her from being "a person, to becoming a personality" and contestant Shweta, who intelligently points out that the "Americanization of India" makes as much sense as saying that in the U.S. we are "Indianized" because we enjoy the practice of yoga.

But the most haunting figure of Pahuja's film is undeniably Prachi, one of the Durgas. She is the most obvious product of a country where 50,000 girl fetuses are aborted each month, where Prachi's father is allowed to beat her simply for disobeying his wishes and where Pooja's mom was forced to walk out on her husband because he did not want a second daughter and suggested they kill her or put her in an orphanage. As much as I personally adore the creative chaos that is India, a place where taking a bad photograph is nearly impossible, it was these underlying yet palpable energies that started to erode at my passion for the place. When I mention my inability to return to Bombay in these last few years, Pahuja candidly discloses her own personal misgivings about the city, which she finds at once magical and infuriating.

At times, the images from the Durga Vahini camps are disturbing, especially when the young, innocent-looking girls interviewed remind the viewer of other militant religious fanatics, like those belonging to Al Qaeda or the Taliban. I always find the image of a child holding a weapon highly disturbing and here it is doubly so because she is learning how to use it to kill an enemy that could be her next-door neighbor. An enemy she would have called a friend if it weren't for a political agenda that influences her to condemn, instead of understanding. 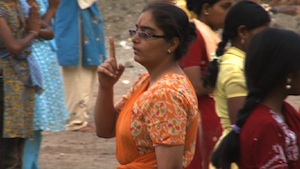 Ed Barreveld, a co-producer on The World Before Her along with Cornelia Principe and Pahuja, points out that "if the film has a heroine at all, it's Prachi." Within her shell of intolerance, hatred and venom spewed towards all that is different, there lies a naive candor, a vulnerability that perhaps could best offers an answer to the problem of bullying. And while her father's tyrannical statements made me cringe, Pahuja sheds light into his forthrightness by explaining, "While we may watch and think what they are doing and saying is so wrong, someone like Prachi's father actually thinks his beliefs are right."

How I felt at the end of the film was a surprise to me too, one I would not reveal but which you'll have to watch and work out for yourself. All I can say is that a fellow journalist sitting next to me, Indian and male, got up in a hurry after exclaiming "there are other sides to India too!" Perhaps sides that may only be visible to men, after all.

The World Before Her screens through April 25th as part of the Tribeca Film Festival in NYC. It's a definite must watch, the film Padma Lakshmi calls "shocking and eye opening for women all over the world" and the DKNY blog describes as "meta with a movie about a competition."

All images courtesy of GAT, used with permission