The line crackled and faded. I had gauged that my son -- who on a recent birthday had joined the ranks of adults -- was calling from Udaipur, my hometown in India. "Mom," he said, and there was a barely discernible pause. I put it down to FaceTime Audio -- the efficient new way of calling international, if one has wi-fi connectivity -- which is sometimes sketchy in small towns. When the second whispered monosyllable came feebly across thousands of mile, I was a little perturbed. Was there a problem? He was after all traveling to India alone on a college hiatus and perhaps encountering a situation. My motherly instinct surfaced quickly, with worry for his health and safety and I quickly checked myself, putting it down to poor connectivity.

"Mom", when a broken whisper came across the lines again, I began to feel alarmed to hear a young man who sounded like he was crying. My son was no stranger to India and fairly street smart, having navigated a trip to India during his high school years, teaching soccer to kids in a slum in Mumbai. Even though he had his 'American ways' he wasn't exactly uninitiated in getting around in India and had recently turned 21. Time to let go, I had thought!

"This is too much," he said in broken voice. Perhaps I had decided to let go too quickly, my mind raced. What could make him cry? Something I had done or perhaps not done? "What is too much?" I asked, at a loss for imagining a situation that he may have encountered in our beautiful and safe hometown, a world class tourist destination as well. Granted that I have not brought my kids back here too often, perhaps to anesthetize myself from all the memories it holds for me and the loss I feel for the absence of my parents. But he should be safe in our family home, almost a century old -- and even intrigued by his place in the passing of generations, by its antiquity and some sense of his heritage -- I thought, trying to calm my fears.

"All this," he said again, not sounding clear or eloquent, two qualities that were usually his forte. It began to dawn on me then. It began as an inkling and then it swamped me with a force that I had been in denial of for most of my adult life. In my quest to belong, 'unbelong' and then belong, I had done what every immigrant subconsciously does, taking from my culture what I could or I needed to and left behind the part that did not fit into my life in the United States easily. Culture is the first sacrifice at the door of assimilation.

It was the legacy and weight of his culture, that my son was reeling under, I just began to understand. Not just the portraits of ancestors from seven generations gazing with unfathomable expressions at the newly arrived foreign born in their lineage. Not the artifacts from colonial times or even some meaningful possessions that belonged to his dear nani, my mother who passed away when he was four. Not even pieces of local arts and crafts that she favored, strewn around our home; her paintings and memories etched on the walls and in our hearts. It was more weighty than any one of these, and overwhelming when all of these were combined. It was who he was; and what was that? Perhaps too much for him to process; certainly something that I had not been able to unravel. 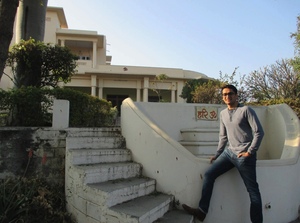 Varun Parekh outside the family home in Udaipur, India.

Culture Identity and the Immigrant

When I was growing up and going to school in New Delhi, I already knew at a young age how to assimilate quickly in the Capital, where the diversity of India was sprinkled liberally in our neighborhood of government bureaucrat families. Our next door neighbors were Sikh for a time and then Punjabi, and many of our friends were South Indians, who hailed from different parts of Southern India, and who would balk at the blanket upstart term we used to describe all those who hailed from Southern India. In a sense we were all immigrants, assimilating in friendships and creating identities and fostering belonging.

Perhaps that was good training ground for the future when I would become a real so- called immigrant. But then in a world of shifting cultural values and blurring boundaries, who is not an immigrant? I live in the United States, which I have now called home for 25 years, and on occasion I have felt like an immigrant when I return 'home' to India.

One hallmark of an immigrant is the desire to assimilate and adapt in the adopted environment. To adopt the culture of your new homeland is both natural and necessary. That sometimes necessitates shedding the baggage of one's own culture to belong with ease in a new culture. If I said, that the human quest, not just the immigrant's quest, is one of the quest for belonging, then I may not be wrong. Modern times have thrown this idea of belonging in a whirl more and more as we are distancing ourselves from our unique identities.

Alienation and Belonging Through the Lens of our Culture

In a world torn by a multitude of differences and professed divisive ideologies, perhaps the idea of celebrating differences with an expression of peace and through the lens of our culture is something that we cannot afford to be without. My tryst with culture and belonging which I had distanced myself from, for the bulk of my adult years came to a head only recently when my grown son visited the same hometown and home, that I visited as a young girl living in a big city. I was not there to filter the memories or interpret the traditions. A mother's natural instinct to protect and redefine traditions could not cushion him from the weight of his culture. And his need to belong could not hold it at bay.

My own relationship with my traditions and culture has been the subject of much personal reflection. However in recent years this has also been tempered by a larger quest for a universal sense of belonging. The human existence may perhaps be a testament to this existential truth.

The Need to Belong and the World Cultural Festival

My association with the Art of Living has imbued with meaning my quest -- and indeed that of millions of people who have benefitted from its programs -- for belonging. Sri Sri Ravi Shankar, the founder of the Art of Living, who has been named by Forbes India as one of the 7 most influential persons in India, has said, "Celebrating our diverse cultures binds us together and expands our perspectives. The World Culture Festival emphasizes on co-existence, demonstrating the power of peace by bringing millions of people together."

The World Cultural Festival is a beautiful amalgamation and celebration, of culture and belongingness. Over 3 days, 3.5 million people are expected to come together in the biggest celebration of peace and diversity. From March 11 to 13, 2016, New Delhi, India, will host the largest cultural extravaganza of our times. Why does this matter?

As a mother, this matters to me because it celebrates what I may not have been able to celebrate enough in my own role as an immigrant parent. As a global citizen, I believe, we have a commitment to future generations to showcase who we were; who we can be and to celebrate it. As a journalist, I am convinced of my role as a social change enabler, and I believe that to turn the tide of violence, culture should stand taller than terrorism on our radars.

We, the human race cannot afford not to to celebrate our diversity. To turn around the rise of intolerance and violence, the celebration of our diversity is a needed solution. Only then can we embrace our uniqueness and belong to a world family. To belong is a human need. The World Cultural Festival is the need of the hour as it celebrates belonging in a unique and empowering way. In envisioning the world family coming together in this celebration, Sri Sri Ravi Shankar remarked, "It's just a small family get together!"

A small family get together indeed. 3.5 million people coming together for world peace, to celebrate diversity and meditate together for universal harmony. Our future generation's sense of who they are and who they can be, is tied up in this belonging.

I am, because I belong.

This post is part of a blog series produced by The Huffington Post in partnership with the Art of Living Foundation for the World Culture Festival. The goal of the series is to present thought leadership, opinions and solutions from leaders of multidisciplinary sectors of business, politics, arts, culture, music and religion who are assembling in India for the World Culture Festival, along with 3.5 million people, to celebrate humanity and promote peace, harmony and harmonious co-existence. The effort is also part of The Huffington Post's "What's Working" solutions-oriented journalism initiative.

Shalini Parekh is a journalist and freelance writer living in the Chicago area, with an interest in issues of identity and culture, particularly with regard to the Indian diaspora in the US. She is adjunct faculty at Columbia College Chicago in the journalism department. She contributes to a blog for the Times of India and also freelances as a broadcast journalist for Times Now, the television news network based in India.