From Wall Street, to the lagging economy, to Greece and the "euro zone," to our broken regulatory system, to the high-speed computer trading system that might have played a role in last week's mini-meltdown in the stock market, to those two wars we're still in a decade later, it's clear that something is wrong. It's not that our political leaders and economic chieftains aren't, for the most part, smart people -- it's that they're making their decisions without judgment or wisdom. And when so many smart people end up making so many mistakes, clearly the way we're working isn't working.

Figuring out why this is so -- and what we can do about it -- is the animating idea behind The Way We're Working Isn't Working: The Four Forgotten Needs That Energize Great Performance by Tony Schwartz, Jean Gomes, and Catherine McCarthy, a terrific new book that is this month's HuffPost Book Club selection. It is essential reading for anyone who wants a more productive and meaningful life. 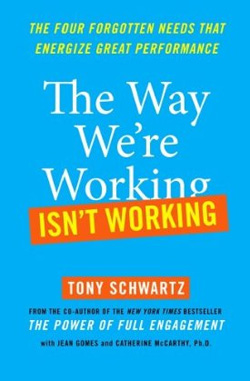 The book is a synthesis of Tony Schwartz' thinking over the years and the latest and most rigorous research across a host of disciplines on what makes people most fulfilled -- in their lives and, specifically, in their jobs. It's less a self-help book than a peer-reviewed survival manual for the modern age.

When you read The Way We're Working Isn't Working, you get that satisfying feeling you have when someone intelligently articulates something you feel everyone knows is true, but couldn't explain why. As Schwartz writes, "across disparate cultures and at all levels, people share both a visceral sense that the way they're working isn't working and an intense desire for more satisfying, productive, and sustainable ways to work and live."

In a nutshell, the book's thesis is that a myth has taken hold that "human beings operate most productively in the same one-dimensional way computers do: continuously, at high speeds, for long periods of time, running multiple programs at the same time." This has led to a world in which:

The defining ethic in the modern workplace is more, bigger, faster. More information than ever is available to us, and the speed of every transaction has increased exponentially, prompting a sense of permanent urgency and endless distraction... Left unmanaged and unregulated, these same technologies have the potential to overwhelm us. The relentless urgency that characterizes most corporate cultures undermines creativity, quality, engagement, thoughtful deliberation, and, ultimately, performance.

Thus, "when we fuel ourselves on a diet that lacks essential nutrients, it shouldn't be a surprise that we end up undernourished and unable to operate consistently at our best."

Yet, according to Schwartz, Gomes, and McCarthy, the most basic human survival need is to renew our energy. We're great at spending it, not so great at renewing it. The costs are "less capacity for focused attention, less time for any given task, and less opportunity to think reflectively and long term." The inevitable result: diminished judgment and wisdom -- and a world on the brink of collapse. "More and more," writes Schwartz, "paradoxically, leads to less and less."

For instance, the authors cite a study of 90,000 workers from 18 countries. Only 20 percent said they were fully engaged, defined as willing to "go above and beyond what's required of them because they have a sense of purpose and passion about what they're doing." Companies with the highest share of engaged employees had a 19 percent increase in operating income and an almost 30 percent increase in earnings per share.

Schwartz tackles each one and, in doing so, provides a roadmap for how to take back control of our lives from our faster-better-more-techno-merry-go-round culture. As he writes, as opposed to trying to mimic the way computers operate, "a growing body of research suggests that we're most productive when we move between periods of high focus and intermittent rest." And yet, instead, "we live in a gray zone" -- unsatisfied, unproductive, unfulfilled.

In the section on sustainability, Schwartz even has an entire chapter on my favorite lifestyle topic these days: sleep. He examines the role lack of sleep has played in disasters like the Exxon Valdez spill, the Challenger space shuttle explosion and the Three Mile Island meltdown. "No single behavior more fundamentally influences our effectiveness in waking life than sleep," writes Schwartz. "Sleep may well be more critical to our well being than diet, exercise and even heredity."

And yet the average American gets only 6.5 hours of sleep a night. Schwartz also cites a famous 1993 study by Anders Ericsson in which the habits of three levels of violin students were studied. What Ericsson found -- and what most people who cite the study focused on -- was how much more the students at the top level practiced than the bottom level. But what intrigued Schwartz was the fact that the top level students also slept more, napped more in the day, and were much more disciplined about giving themselves down time and creating rituals to renew their energy. In other words, "periods of high focus and intermittent rest."

In the last chapter, Schwartz tells of the late KPMG CEO Eugene O'Kelly, who died of brain cancer at 53. After being diagnosed, it saddened him to see people who hadn't been "blessed with this jolt to life" go about their lives being so busy trying to make so much money. "Why was it so scary to ask themselves one simple question," wrote O'Kelly, "'Why am I doing what I'm doing?'"

Asking ourselves who we want to be and how we want to behave -- resisting the default into denial and self-deception -- is the key to growing, learning and evolving...It means recognizing that as addicted as we can become to the speed and intensity of our lives, we're more creative and productive when we move intentionally between effort and renewal, action and reflection.

Are we simply becoming, as Schwartz says, "dinosaurs of the future?" The choice is up to us. "Together, we can enrich and renew the world we share, or we can speed up its demise," writes Schwartz. "That's true for each of us as individuals. ...and it's truest of all for the organizations in which we work."

It seems like President Obama is on the same page. In a commencement speech on Sunday at Hampton College in Virginia, he told the assembled graduates:

You're coming of age in a 24/7 media environment that bombards us with all kinds of content and exposes us to all kinds of arguments, some of which don't always rank that high on the truth meter. And with iPods and iPads, and Xboxes and PlayStations -- none of which I know how to work -- information becomes a distraction, a diversion, a form of entertainment, rather than a tool of empowerment, rather than the means of emancipation. So all of this is not only putting pressure on you; it's putting new pressure on our country and on our democracy.

As Schwartz says at the end of his book: "The world is changing. Are you?"

Reading The Way We're Working Isn't Working -- and taking part in our discussion about the issues it raises -- is a great first step toward making that change. And be sure to read Tony's first blog post about the book, coming tomorrow.