In 2008, the United Nations declared that the world passed an unprecedented, but silent, benchmark: for the first time in history, the world is more urban than it is rural. This event had been anticipated for some time and was subject to constant academic reference in support of an "urban age" thesis. This conceptualization has been used in support of "city growth" and to justify the dominance of the city -- simultaneously conceptualized as the urban -- over other geographies and settlement types. In more recent years, this topic has been revisited by critical urban theorist Neil Brenner, Professor of Urban Theory at the Harvard Graduate School of Design. Contrary to popular beliefs, Brenner argues that the world has been completely urbanized and warns of the danger in fetishizing "cityness."

Brenner and his colleague, Christian Schmid, have already deconstructed the flawed methodologies deployed by United Nations demographers to quantify the global urban population in an earlier publication. These demographers rely on UN Member States to individually report data on its population, which vary greatly by country. Mexico and China could have different urban populations depending on which official methods were used. Meanwhile, in India, an urban area has to satisfy these requirements:

i. A minimum population of 5,000
ii. At least 75 percent of the male main working population engaged in non-agricultural pursuits;
iii. A density of population of at least 400 persons per sq. km.

Not considering these practices, the natural inconsistency of UN Member States' reporting also raises questions over the accuracy of our urban age. UN reports could use data from Member States that can be nearly a decade old. If this is the case, what use does this narrative have in framing our decision-making at the local, state and global level, when the data is epistemologically and methodologically flawed in a way that makes international comparisons meaningless? Meanwhile, equating "urban" with "city" is problematic because it suggests that once a city's administrative boundary ends, the area is suddenly non-urban. This is only useful for planners to demarcate a line where services to a city's electricity, plumbing, water and the like become unavailable to developers wanting to build outside this border.

In his new piece titled "The Hinterland, Urbanised?", Brenner contends that the "capitalist form of urbanization continues to produce contextually specific patterns of agglomeration, but it also relentlessly transforms non-city spaces into zones of high-intensity, large-scale industrial infrastructure -- operational landscape." Because these landscapes lie outside our commonly perceived "urban" and beyond our immediate view in a conceptual "outside" or "blind field", it has subsequently evaded our attention and critical inspection. These sites range from deforested areas in Mato Grosso, Brazil, to phosphate mining pits in central Florida, to desert-agro-industrial infrastructures in Saudi Arabia. Brenner says "spaces of the non-city have been continuously operationalised in support of city-building processes throughout the global history of capitalist uneven development." These urban areas, which can be found throughout the world, even in "extreme territories", reflect a global or planetary urban phenomenon. 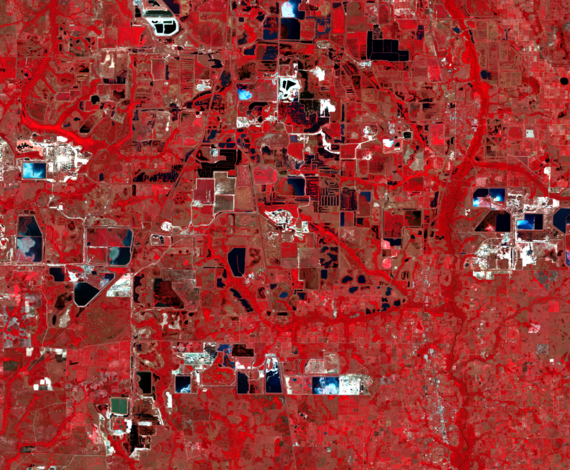 Image of a phosphate mining pit in Florida in 2011. USGS snapshot.

Brenner's investigation of contemporary urban conditions raises critical questions about the nature of our urban world from epistemological, pedagogical, and practical dimensions. If the entire world is urbanized in varying scales across the globe, how can planners and decision-makers respond to these changing geographies and develop comprehensive action plans? Surely the roles and responsibilities of managing these operational landscapes do not end with a city's administrative boundaries. Are state and national governments equipped with the professional knowledge and are in a position to ethically manage these sites?

The recent protests organized by the Sioux tribe to halt the construction of a $3.8 billion crude oil pipeline project in North Dakota clearly demonstrates the need for new forms of collaborative and participatory governance to curve the negative impacts of capitalist urbanization. The severity of the urban condition could be ascertained through taking a brief glance at the following map representing the various oil and gas pipelines in the United States. If complex and dense infrastructures are commonly associated with urban areas, wouldn't these expensive pipelines constitute those structures, too, and suggest large-scale "urban-ness"? This is just one of the many visualizations of our extensive urban framework--think about the effects when multiple layers of infrastructures and conditions, such as air pollution, are layered upon one another. 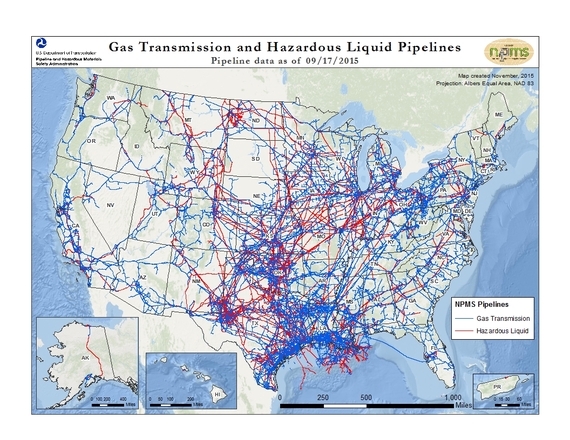 Image of gas transmission and hazardous liquid pipelines in the US. NPMS

It is clear that the world is more urban than commonly understood, or even completely in varying degrees. Decision-makers and planners must work in an open, democratic, and participatory manner to engage citizens in the development and management of these operational landscapes; otherwise, we will continue to allow "the silent violence of accumulation by dispossession and environmental destruction in the world's hinterlands and operational landscape." For aspiring planners (broadly defined) like myself, how can we re-imagine or fantasize about an alternate, more equitable and sustainable reality for these landscapes?

With the UN Conference on Housing and Sustainable Urban Development (Habitat III) just around the corner, the urban--as more narrowly conceived by the global community--is entering the forefront of national and international agendas. The international community needs to leverage this opportunity to more critically examine our existing and emergent urban conditions in an effort to ameliorate the urban condition and honor the spirit and commitment of Agenda 2030, by "transforming our world".