Having had many opportunities to engage both broadly and deeply in UN projects relating to sustainable development, I am familiar with -- and am a consumer of -- the United Nation's 'Urban Age' Paradigm declaring that the world is more urban than ever before, with more than 50 percent of the world's population living in urban areas. That is why I experienced quite a revelation when I ran across Neil Brenner and Christian Schmidt's publication titled "The 'urban age' in question," which has timely and urgently needed contributions to important decision-making processes, being that the Paris climate conference is currently underway.

In short -- and without simplifying this central idea too much -- Brenner and Schmidt critique traditional population count as an appropriate tool and indicator of how "urban" the world actually is. The current methods deployed by the UN to measure urbanity through population count is an epistemologically identical and empirically unjustified equivalent of a system conceived half a century ago, one that relies on questionable methodologies to homogenize the heterogeneous "urban" cohort. For instance, India uses the following troublesome metric to categorize urban areas, requiring that they meet the following criteria:

i. A minimum population of 5,000
ii. At least 75 per cent of the male main working population engaged in non-agricultural pursuits; and
iii. A density of population of at least 400 persons per sq. km.

The more obvious red flag here is the 75 percent benchmark and the gender prerequisite. As a result, India's "national census bureau neglects to classify a huge number of small- and medium-sized towns with populations exceeding 5000", which is a cause for concern because 'the scale of the world's urban population is strongly influenced by the urban criteria used within the largest population nations.' This paradigm implicates not only our personal understanding of how urban the world is, but how we frame and subsequently respond to urban issues. In the same way that these two academics critiqued this population count as an "analytical maneuver", contemporary academics, professionals and students like myself have been using this population threshold as a heuristic to understand and conceptualize the 'urban.' This is not to say that population counts are unnecessary; these authors agree that they have their usages but disagree when this method is used to represent and explain the urban as well as the urbanization process.

The reasoning or motivations for the UN's approach is unclear; its approach could have resulted from simple oversight or possibly because an arbitrary population count can be a convenient proxy to conceptualize and present data. Regardless of this fact, if this method is empirically unjustifiable, how can we orient thinking in ways that can better inform decision-making and our understanding of the urban?

In order to answer this question, it is necessary to recognize that abandoning this archaic approach requires us to retreat from our perception that the urban can be organized into discrete units that we label as "cities" or "metropolitan areas." We must also recognize that urbanity is not limited to cities and that urbanization processes exist outside these arbitrary boundaries. It would be inappropriate to not recognize and frame these urban issues as non-urban, and that seems to be the reason why Brenner chose to use a picture showing the environmental degradation posed by tar sands as the cover of his new book, Implosions/Explosions: Towards a Study of Planetary Urbanization, rather than something more predictable like city landscapes or slums (which I admit to have done in the past). While tar sands have been framed as an environmental problem and an indigenous rights problem, it has yet to be widely understood as an urban problem; after all, the extracted oil is used to fuel our cars. By not recognizing this as an urban problem, we consequently ignore that we consumers are indeed at fault. This framing of the urban as being cities and the non-urban as the rural periphery is not just inaccurate, but also hazardous to thinking about climate change and sustainable development, something that was not directly mentioned in Brenner and Schmidt's publication. 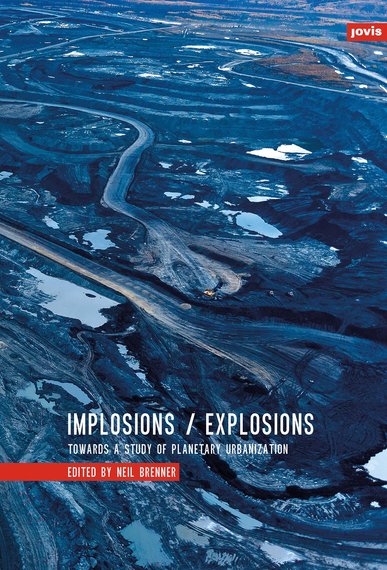 New book edited by Neil Brenner with tar sands on the cover.

What's next?
To move forward, Brenner and Schmidt say that new cartographies and cognitive maps are necessary to reorient thinking about the urban (which I did not include here for fear of copyright infringement, but can be found here). An example of a bad visualization that would resonate more with people who use social media is the map showing nighttime lights found below, which has circulated in my newsfeed on several occasions. It is easy to see the lights as representative of urban areas and the dark places as non-urban areas, but work from Brenner's Urban Theory Lab indicates that these unlit areas are anything but urban. This is one of the more salient examples of how new theories and visuals are powerful tools to help conceptualize the contemporary urban complex, and inform policy and practice. 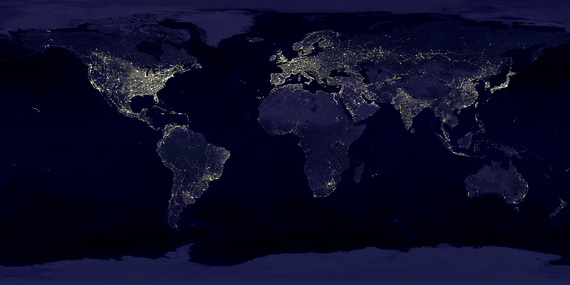 The theoretical framework advanced by these authors comes at a timely moment, with COP21 and the upcoming bicentennial UN Conference on Housing and Sustainable Urban Development , which will produce the "New Urban Agenda." Having read all updated policy papers and regional reports produced thus far, I can claim that much more must be done before we can put the "New" in the "New Urban Agenda." It is exactly because of this that UN-Habitat's Urban Thinkers Campus, a subsidiary of the World Urban Campaign, becomes useful as an enabling space for public engagement and allows for a critical exchange of ideas moving beyond closed-door professional consultations seen in the past. Perhaps the UN will adopt more appropriate methodology if more critically engaged people participate in these public Urban Thinkers Campuses. Only by doing this can we fairly produce an urban agenda -- not an agenda just for cities -- that can lead global thinking these next 20 years.