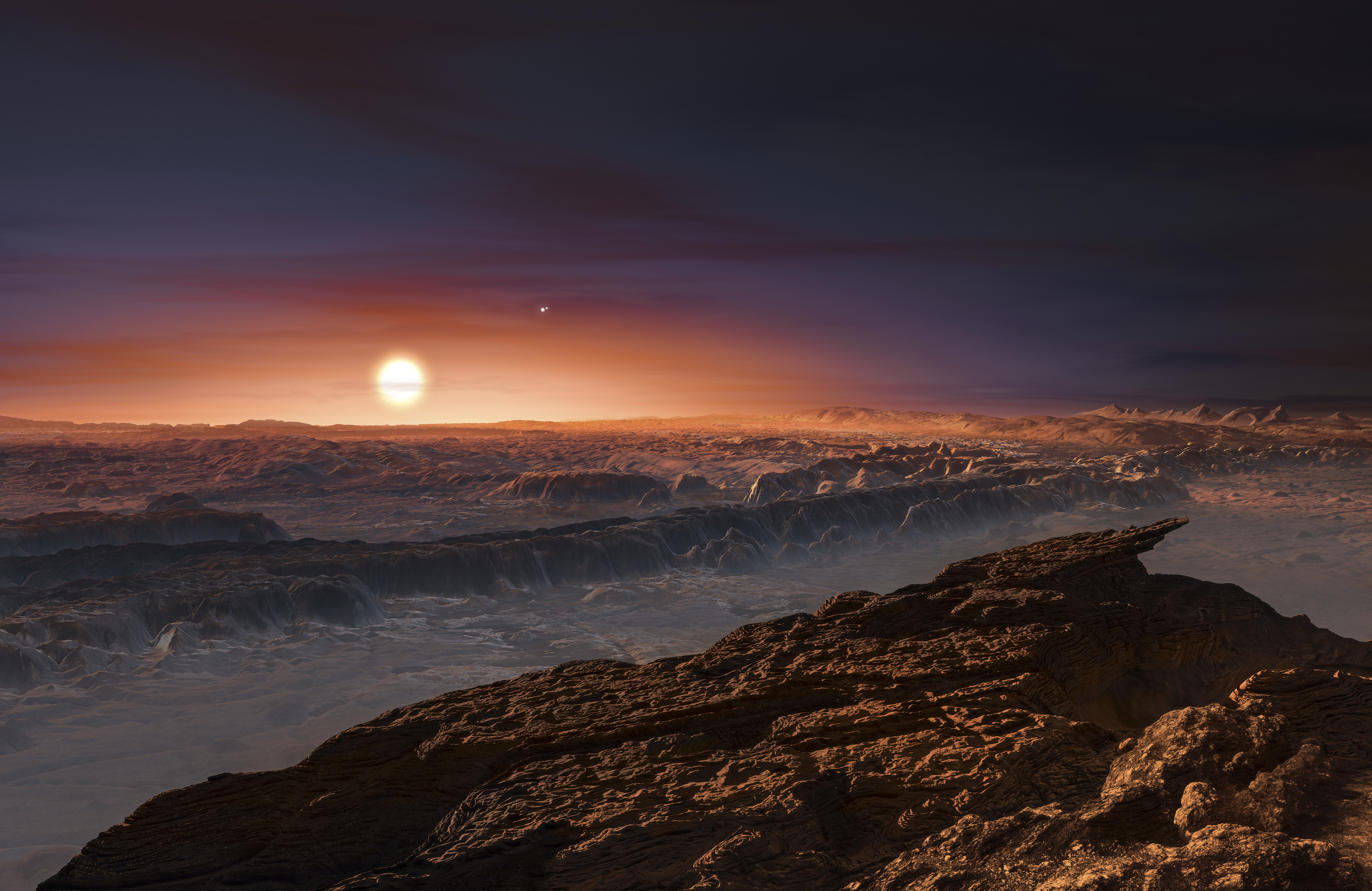 A view of the surface of the planet Proxima b orbiting the red dwarf star Proxima Centauri, the closest star to our Solar System, is seen in an undated artist's impression released by the European Southern Observatory August 24, 2016.

Astronomers using a telescope at the European Southern Observatory in Chile have announced the discovery of a world around the star Proxima Centauri, the nearest star to us other than the Sun. They base this on very slight stellar wobbles -- a convincing claim resting on more than a dozen years of accumulated data.

Proxima Centauri's paltry distance (4.2 light-years) is matched by its paltry size: It's a dim bulb, a red dwarf that's only one-seventh the Sun's diameter. The newly discovered planet orbits this star in only 11 Earth days. This cheek-by-jowl relationship ensures that, despite Proxima Centauri's meager energy output, there's enough sunlight hitting the planet to sustain large bodies of liquid water. There could be oceans covering at least some of this world, and where there's water, there might be life.

But is there? It's a question as obvious as the Matterhorn. Unfortunately, it's hard to get an answer.

Some will immediately figure the best tactic would be to send a reconnaissance probe to Proxima Centauri to check out the neighborhood. A nice idea, but so is world peace. Neither is easy to realize in practice. Our fastest rockets would take 75,000 years to get to this planet, by which time the crew's enthusiasm for the project will have soured.

Of course, we could send robots instead. Phil Lubin, a physicist at the University of California, Santa Barbara, has outlined a scheme that would use ganged lasers to propel tiny probes about the size of a silver dollar to the Alpha Centauri system at roughly one-fifth the speed of light. Alpha Centauri is a double star rather close to Proxima Centauri, and it would be easy to send the probes to the latter, now that it boasts an interesting target for scrutiny. Lubin's scheme has been funded for study by investor Yuri Milner. It's a serious proposal that should now enjoy some enhanced motivation.

But even if Brobdingnagian lasers were launching pygmy probes today, it would be at least decades before anything arrived. And in the interim you can bet your trust fund that hordes of astronomers will be trying to espy this planet with the biggest telescopes they can get their hands on, including the ones in Chile that were used to find it. If they manage to sample the light from this new world, they can -- at least in principle -- sift it spectroscopically for oxygen or other gases tied to biology.

But get real. This planet is small, dim and difficult to see. Very difficult. It will probably require new space-based instruments, such as NASA's James Webb telescope, to get these kinds of data. They're years away.

A more immediate opportunity is to use big antennas to search for emissions that would tell us that this new world has not just life, but technically adept life able to produce radio signals. That's not an entirely easy experiment, as Proxima Centauri is deep in the southern sky, and you can't see it from any observatory north of Miami. But in 1995, the SETI Institute's Project Phoenix made observations of a few hundred southern hemisphere stars using an antenna in Australia. The Parkes Radio Telescope was swung in the direction of Proxima Centauri, and a search was made for microwave signals. None were seen, despite the fact that if there had been a society on this planet using a similarly sized antenna aimed at Earth, we could have noticed it had the broadcast power been a measly few kilowatts or more. If there are aliens hanging out on this world, they were not broadcasting in our direction. We should try again.

So how remarkable is this newly discovered exoplanet? How excited should we be? Some astronomers now estimate that as many as one in five stars hosts a habitable planet, in which case this is just one of tens of billions in our galaxy. In that sense, you could say it isn't so extraordinary.

But on the other hand, none of these other tens of billions will be as close as this one. It will always be special, somewhat akin to Prince William. Sure ,he's just another British kid -- but one who's destined to forever be the subject of our attentions.