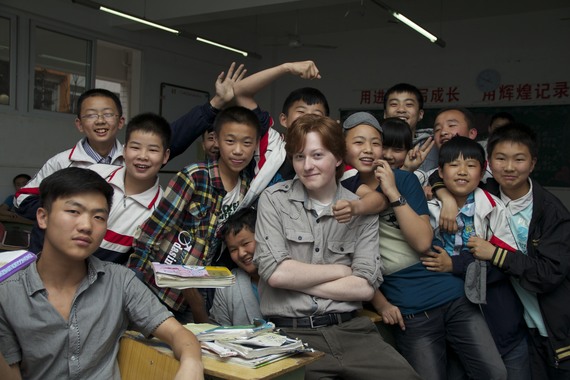 I feel at home whenever I travel with my camera. I am in my living room when I capture pieces of the world with my lens.

I was homeschooled. Actually I should call it world-schooled. My mother, a former travel agent, literally turned the globe into my classroom. We spent months in Maine planning trips, studying languages and the next country to visit, making me anxious for adventures beyond Yarmouth, Maine. I have lived and studied in Guatemala, Italy, Spain, France, New York City and 43 of our 50 states.

I was 13 when my father became the Technical Director for NBC coverage of the Olympics in Beijing. My mother hired a Mandarin teacher to prepare us to travel there with my father. I fell in love with Mandarin. Perhaps it was my strong interests in music and the seeming melodic tone of the language. There were also the compelling stories of Chinese literature and history that our teacher, Zhou Li, shared. For my family, studying mandarin was merely preparation for the trip. For me, it was a passion that became more intense during our two months in China, traveling to Xi'An and Suzhou in between exploring Beijing.

A couple of years later, I became as passionate with photography as I was with Mandarin. It happened when my dad gave my mom a Nikon DSLR for Christmas in 2009. Her camera would become my new traveling partner. As I started using the camera more, I saw the world around me as the 16/9 dimensions of a photo. Soon after, I was on a two-month cross-country American road trip. From the frigid winter wonderland of Yellowstone to the windy and barren landscapes of the Grand Canyon, my friend, the camera, was with me.

The size and grandeur of the Grand Canyon amazes people but my camera failed to capture this natural wonder of the world in a way that satisfied me. It was too massive for my skills as a photographer. I ended the journey with lots of pictures that depicted small pieces of a large place. I was disappointed.

My failure to tell the story of the Grand Canyon through photography pushed me when I traveled to China for a second trip. I was 17 when I returned to Beijing for my first trip abroad without my parents.I arrived jet-lagged and a mix-up forced a two-hour wait for Xiao Chunzhi, my teacher and host. After a 45 minute, bumpy cab ride, we finally arrived at the small apartment in an old rundown government housing project. I made myself comfortable on the small futon in the alcove and fell asleep only to be continuously awakened by Xiao who was offering me food. My sick and jet-lagged body only needed sleep. However, as culture and customs dictate, Xiao's sole mission was to feed the guest out of kindness and duty.

I saw that it sometimes takes more than mastering a language to communicate across cultures. By then, I had studied Mandarin at Bowdoin College, Hunter College and the China Institute in New York. Just as photography challenged me at the Grand Canyon, my linguistics skills faced a cultural hurdle in China. Xiao continued to poke me and point to food and I started to wonder if this trip was really a good idea.

I am so glad I did not surrender to any impulses to go home. Eventually, I picked up my camera and was at home again. I became recharged with a new mission: to integrate the amazing people I met into my pictures of architecture. I soon traveled to Guanghan, where I spent three months teaching English. In the city, I became acquainted with people who would soon become lifelong friends. I captured them next to the San Xing Dui Museum and the City Hall, two of the most famous sights in Guanghan. I expanded my photographic focus of architecture to bringing portraits of people and candid moments prominently in the shots of monuments. I now know what may have been absent from my attempts to document the grandeur of the Grand Canyon. The mission of my lens is now to augment the views of monuments, architecture and sites of the world with the beauty of humanity.

Forrest Sprague, who was home schooled, is a freshman at Pace University.