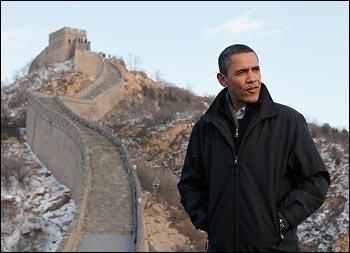 While traveling in Europe, India and China in mid-August, I met political, business and media leaders as well as friends and family. Together we reflected on a very interesting question -- why are Americans disappointed with Barack Obama?

Here is a summary of our thoughts:

Barack Obama is only twenty months into the job of being president of the most powerful country in the world. When he was elected, he inherited probably the worst presidential legacy of any president in U.S. history.

On the economic front alone, he was facing a $10 trillion budget deficit while handling the worst financial crisis since the 1930s along with a one-year old recession. To stop the bleeding of the financial sector, and to reverse some of the effects of the recession, he was forced to increase the public debt. He managed to do so while keeping interest rates at historically low levels. The budgetary impact of the increased public debt was minimal thanks to those low interest rates. An important side effect was that American home owners were able to refinance their mortgage debt at the lowest levels in a decade.

President Obama took an aggressive stance to put into place the Dodd-Frank Act, a new regulation that will (hopefully) avoid the country's being taken hostage by greedy financiers on Wall Street who played the U.S. economy like a game of roulette. Europe is not even close to addressing these kinds of issues.

On another front, the president inherited two wars that cost tens of thousands of lives and more than a trillion dollars, yet it is difficult to justify either as defending the interests of the United States. He deftly managed to reduce the commitment of the country in Iraq and is seriously trying to find an escape from the ill-conceived Afghan war. He is also working hard to establish a peace process in the Middle East.

While doing all of these things, Obama has pushed the United States to solve one of its most shameful societal problems -- 40 million residents deprived of health care. This delicate and dangerous task is something previous presidents had been unable or unwilling to tackle.

In the midst of this tremendous juggling act, a potentially catastrophic environmental problem in the Gulf of Mexico occurred, leaking millions of barrels of oil into those waters, causing a rift between corporate and governmental responsibilities.

President Obama has dealt with all of these problems in just twenty short months. Twenty months! What is wrong with us? Don't we understand that things take time, and that with the impossible legacy he inherited, the President of the United States has achieved more than has any other president in his first half-term? Have we become so shortsighted that we believe that we can get rid of unemployment in a matter of months? We see that company results are improving and the debt and equity markets have been the strongest in three years. These are great beginnings. Yet they are only beginnings.

Isn't it time that we realize what has been done and that patience is essential? Of course, the opposition will blame the president: that's all they can do since they have had nothing to offer for two years and essentially caused the problems Mr. Obama is now facing during the previous eight years when they were the majority party.

It will take at least two terms to put a country back on track that has lost the respect of other countries because of its moral, military, and financial deterioration. It will take at least that long for any serious improvement in unemployment to take place. This will not happen before 2011. We always knew it.

Truly responsible leaders should not encourage disappointment among the American people. They should not foster fear and dissension. All of us need to stop creating unrealistic expectations. Right now we believe that the worst of the economic and of the financial crisis is behind us. While things are far from perfect, progress is happening. This progress gives us hope, something none of us felt at the end of 2008.

Can we continue to blame just one man for all of our woes? Can we expect him to solve all these problems he did not create, and to do so immediately? If we do, are we acting like spoiled children?