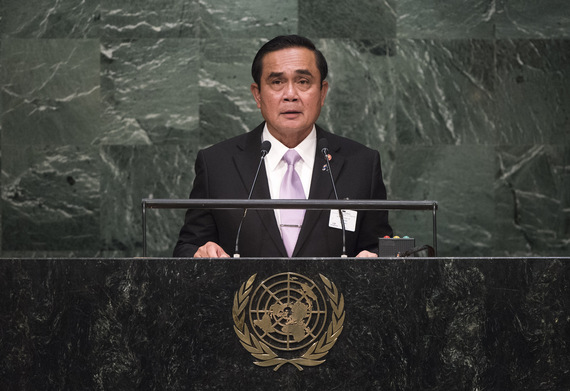 Any illusions that Thailand is a functioning democratic state were laid to rest last week when it appeared before the UN's Universal Periodic Review (UPR) in Geneva.

The verdict was damning. John Fisher, Geneva director of Human Rights Watch said "The Thai government's responses to the UN review fail to show any real commitment to reversing its abusive rights practices or protecting fundamental freedoms". He also pointed out that despite the fact that there was increasing discontent within the international community about the paring away of freedoms in Thailand, "The Thai delegation said nothing that would dispel their fears of a continuing crisis." In short, despite the Thai government's assurances in February that it "attaches utmost importance to the promotion and protection of human rights of all groups of people" the opposite is true, as the Junta incrementally chips away at the most basic tenets of democracy.

And this is for one very simple reason: the junta doesn't want to relinquish power. Whether it needs to continue postponing elections or manipulating the constitution, it will do all it can to safeguard its status as Thailand's kingmaker. As I mentioned before, Thailand's upcoming constitutional referendum, slated for August 7th, is nothing less than a sham as the draft document goes to great lengths to gag and nullify the Thai people's influence over politics. By bestowing to the handpicked Senate the deciding vote in passing legislation and influence over the appointments made to the Constitutional Court and by leaving the door open to a potential non-elected Prime Minister, the current members of the junta will maintain a tight grip on power in Thailand, even with the country nominally ruled by a civilian government.

A rather cringe-worthy blow to Thailand's reputation came in the form of a six page document written by the Thai Ministry of Foreign Affairs. A sort of 'cheat sheet' for diplomats on how to defend the country's reputation in the face of international criticism, the document reads like a masterclass in doublespeak and euphemism usage. In English, the title is "Thailand - Towards Reform and Sustainable Democracy: The Need for Public Order and Social Harmony". Inside, it assures the reader that the authoritarian measures taken by the regime are for the nation's own good and indeed "do not impinge on general freedom of expression - which we believe to be fundamental element of a democratic society - as long as such expression does not undermine public order and social harmony."

Unfortunately for Thailand, no amount of carefully calibrated words can disguise reality. The criticism levelled at the Thai Junta is entirely legitimate. For example, Article 44 of the interim constitution makes any action the Junta takes "lawful, constitutional and final", meaning, as many critics have pointed out, the Junta can do pretty much whatever it likes, whether it is riding roughshod over environmental concerns as it is doing by rushing through plans for a new runway at Bangkok, gagging critics by detaining them in custody, controlling what people 'like' on Facebook or running 'attitude adjustment programs' which actually contravene UN conventions on torture. Indeed, even the food served up on tables across the world is not untainted by the Junta's entrenched disregard for human rights and democracy, a recent investigation by Associated Press found that Thailand's very half-hearted implementation of International Labor Organization laws enables the use of slave labor in the fishing industry.

Despite this, Thailand seems to believe its own PR, and even in the face of widespread international opprobrium, it hopes to become a non-permanent member of the United Nations Security Council (UNSC) for the 2017-2018 term. Virachai Plasai, the Thai ambassador of the permanent mission to the United Nations seems - on record at least - to not accept just how bad Thailand's actions are beginning to look to the outside world, saying that while it can affect the vote, "as long as Thailand can handle the situation at home and has not yet to become a failed state, our country has a chance to get a UNSC non-permanent seat". That Virachai sees no relationship between the strangulation of democracy at home, and its bid for a seat as a non-member of the United Nations Security Council (UNSC) for the 2017-2018 term is baffling. History should teach Thailand that if it wants to take its place on the international stage, it needs to first ensure it deserves a place on it. In 2006, its dreams of a Thai - Surakiart Sathirathai - stepping into the shoes of Kofi Annan as Secretary General of the UN were dashed by unseemly political in-fighting followed by a military coup. And since then, not much has changed. In order to take up a place on the Council, Thailand needs the support of two-thirds of the UN's 194 voting members and to win the support of the UNSC's permanent members - the United States, Britain, France, Russia and China. After a group of 19 European Union ambassadors confronted the Thai junta in April and complained about the faulty way it is organizing the constitutional referendum, hopes that EU members would vote in favor of Thailand's bid for the UNSC faded fast.

While Thailand may labor under the illusion that it can kid the world with its 'home-devil, street-angel' act, the world is not fooled. It simply cannot separate the face it wishes to present to the world from the very real domestic problems it is facing. Inviting Thailand to take a place in the UNSC at present would be akin to asking the school bully to oversee a high school welfare program. As last week's UPR showed, any suggestion that it should form part of the UNSC is laughable.