We spend a lot of time, here at Thrillist, trying to figure out the best things to eat. And we also spend a lot of time arguing about the places we'd want to live all over the world. So, we decided to take those two arguments and make a case for the 18 best cities on this planet to eat and drink. We tried to keep in mind several things: uniqueness of traditional food/drink style, quality of restaurants/bars, diversity of cuisines, and also, for the most part, a feeling that it is changing and improving.

Some staples of these sorts of lists were left off, and while you can argue all you want about the merits, we feel strongly that if a place is resting on its laurels, they should consider stepping off said laurels, and doing something new and interesting. Anyway, here are our 18 favorites, feel free to make the case for your own in the comments below: 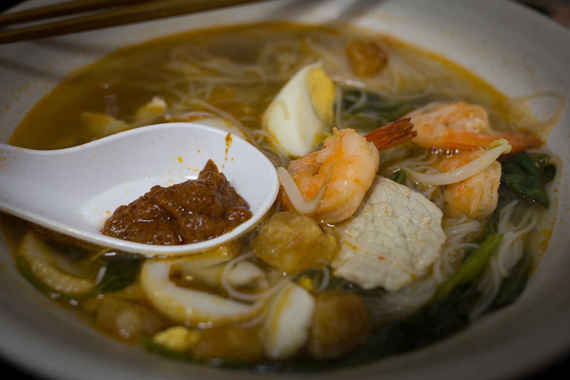 There is a reason that the state of Penang is often called "the food capital of Malaysia", and that its capital city of George Town and the surrounding areas attracts tourists from all over the world (Australians! Spaniards! People from Upper Michigan!). First of all, it's so very cheap. Second of all, the mix of all these different styles (Indian, Chinese, Thai, Malay) creates a mish-mash of flavors that feels at once familiar and very unique (Rojak is essentially donuts, shrimp paste, and fruits, and it works, OH DOES IT WORK!). Third of all, they have basically infinity soups that are all so different (pork and duck with cinnamon and star anise; shrimp and pork-bone with noodles and fish balls; mackerel, tamarind, and chili) you could just have soup every day for a week, and never try the same thing twice. Fourth of all, did we mention how cheap and delicious everything is?!? Do yourself a favor: go to the Gurney Drive Hawker Centre, and eat all the food for less than $10. 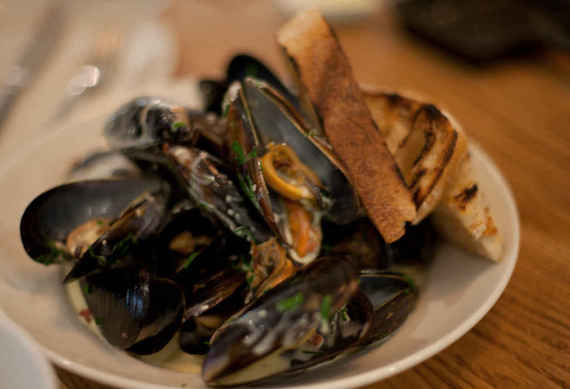 17. Melbourne, Australia
What you're looking for: A table at MoVida so you can sample the spicy Wagyu beef tartare; chili baked mussels from Cumulus; sweet "laneway" dining

If Sydney is the New York City of Australia, Melbourne is basically a less hilly San Francisco: smaller, a little more Victorian in its stylings, with an impressive food scene to match. Though famous chefs from all over the world have opened outposts in Sydney (see: David Chang), Melbourne's scene happened more organically with chefs that came up there, as evidenced by now-ultra-famous toques like Frank Camorra of the MoVida empire, and Andrew McConnell of Cumulus, who turned laneway (like alleys, but much cooler sounding) dining into something more hep, less sketchy. Their Italian immigrant population created a formidable cafe scene (check out Cafe Di Stasio, the old standby Caffe e Cucina, newer moves like Twenty & Six Espresso). Also, it's worth pointing out that one of the best newer Korean restaurants is named for the family from The Cosby Show (Huxtable), and would only be more awesome if it was named for Rudy's friend Bud. 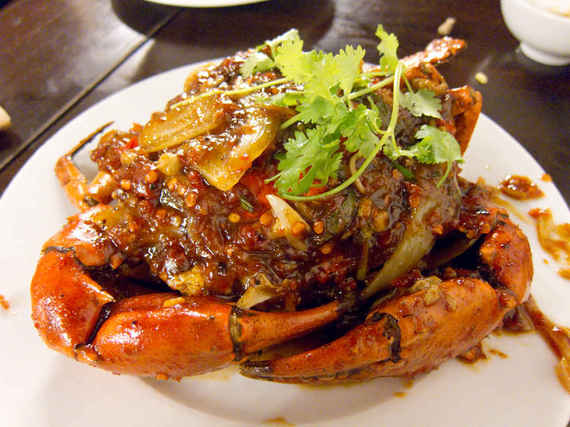 Sooo... first of all, most of the locals call it Saigon, still. Second, this city -- full of conflicting imagery, passions and flavors left over from colonial France, combined with Vietnam's own flavorful cooking led to the creation of one of the best sandwiches in the world (bahn mi). Third, there is a reason nearly every trendy coffee shop in the states serves their intensely sweet yet addicting coffee. On top of that, one of their iconic bars has a drink called Journalist's Juice, and The Australian's travel columnist reported that Brangelina has been seen all over the place, and IF IT'S GOOD ENOUGH FOR THE GUY WHO HAD A SMALL ROLE IN THELMA AND LOUISE, well, I think it works for us too. 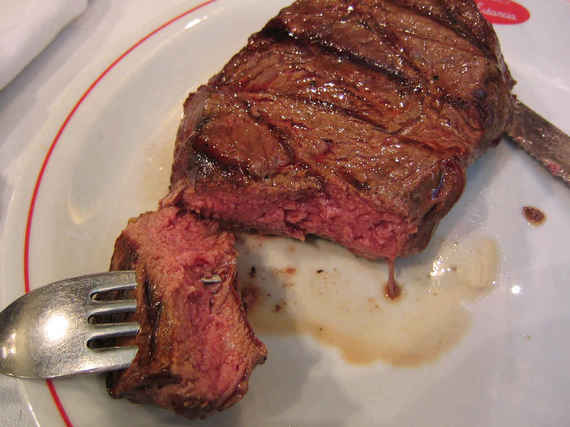 15. Buenos Aires, Argentina
What you're looking for: All of the steaks, and red wine, and empanadas ever

What used to just be a bit of a one-trick pony (do you like steak? do you like wine?!?) has -- in the past few years -- blossomed into one of the top eating and drinking destinations in the world for anyone who wants to eat like a king, but only has the money of maybe a viscount. Whether you're hitting their parillas (just go to Don Julio, and get the entraña), snacking on empanadas (we like them at Peron Peron) and choripan sandwiches (there might literally be no better street food in the world) on the street, drinking incredible Mendoza, Salta, and Patagonia wines in their wine bars, or even going to one of their trendy "closed door restaurants" (restaurantes a puertas cerradas) inside a chef's home, BA has to be on any food enthusiast's radar. 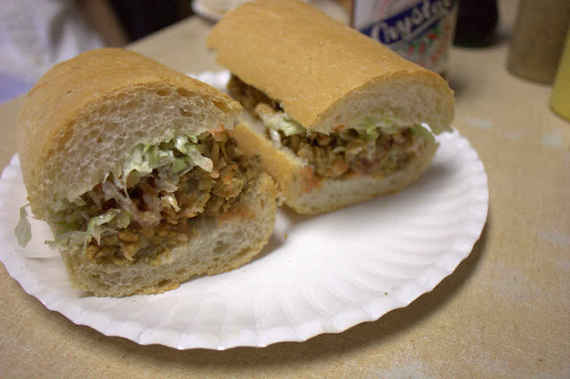 14. New Orleans, USA
What you're looking for: A po'boy at Domilise's; a Sazerac at the Sazerac Bar; a local family to bring you to a lunch-turned-dinner at Galatoire's

The city that invented the cocktail has enthusiastically and boastfully long-since mastered the art of padding the stomach for said concoction. You could spend an entire visit only eating Cajun and Creole dishes, like jambalaya, red beans and rice, and gumbo, and never touch a fraction of the dishes available. Yet, I promise you'd never be disappointed. NOLA also brings its own soul-food institutions (the fried chicken at Willie Mae's Scotch House and Dooky Chase's both deserve their own litany), while classic French restaurants in the Quarter could vie to be the most beloved of the grand-dames of America's eateries (Arnaud's, Antoine's, and Galatoire's are each in the running). And then there are the po'boys: fried shrimp, peacemakers (fried oysters with bacon and cheddar), roast beef with extra debris sauce -- whatever your tastes, it still works packed between that crusty Leidenheimer bread. And then you should go drink a Sazerac or three. 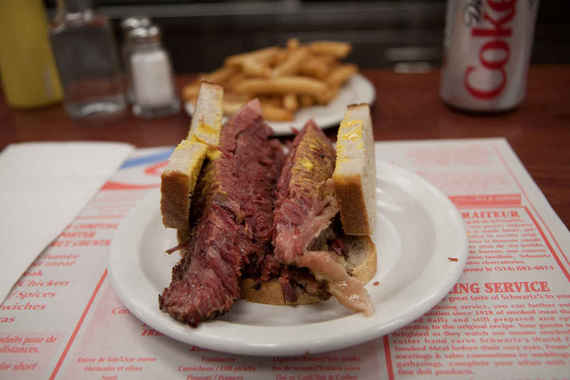 13. Montreal, Canada
What you're looking for: A table at Au Pied de Cochon; a bagel from St-Viateur or Fairmount; Schwartz's Special at Schwartz's Deli

Just because you went here when you were 19 because your older brother's friend told you about Club Super Sexe doesn't disqualify it from being a top food city. The center of innovative Québécois cooking, Montreal makes the list both for what it brings in history (the famous smoked meat, which, if you have it done right at Schwartz's, will ensure you never eat "Canadian bacon" again; poutine of all shapes and flavors) and modern cooking, with places like Au Pied de Cochon, Olive et Gourmando, plus crazy forward-thinking food and drink being cooked out of dépanneurs (essentially convenience stores) like Le Pick Up and Depanneur A.S. It also helps that they have an open-every-day farmers' market (Jean-Talon) in Little Italy, and arguably the best kind of bagels in the entire world, which, unlike your older brother's friend, are even becoming popular in -- gasp -- New York. 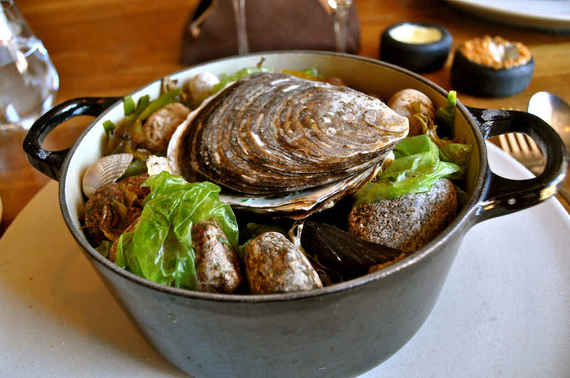 12. Copenhagen, Denmark
What you're looking for: Smørrebrød from Aamanns; Døp's hot dogs; Mikkeller beers; someone to bribe to get you into Noma

Let's get this out of the way first: the Scandinavian comestible capital is much more than Noma, the much-lauded former Pellegrino World No. 1-ranked restaurant. You want Michelin stars? 15 restaurants in their city have them. But enough about the fancy stuff, the best part of Copenhagen is the quality of their comfort and street foods, like open-faced sandwiches called smørrebrød from Aamanns (pork rillette w/ thyme, mustard, pickled squash, and gooseberries); or Danish-style hot dogs from Døp or Harry's Place, or pickled herring if you're feeling particularly Danish/adventurous. It doesn't hurt that Mikkeller and their amazing beers originated in the Danish capital. Oh, and in case you didn't know: Noma is here, too. 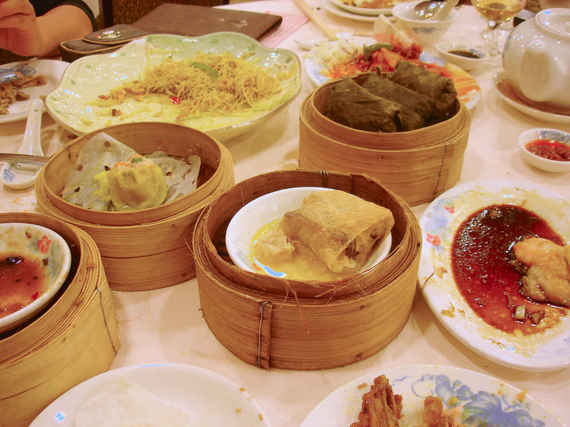 11. Hong Kong, China
What you're looking for: Steamed flower crab at The Chairman; BBQ pork buns at Island Tang or Tim Ho Wan; all the steamed dumplings you can eat

Skyscraper City shan't be a surprise on this list -- its range of upscale restaurants on the top floors of, um, skyscrapers, alongside tiny but grand dim sum shops, and its past as a former British colony make it the sort of perfect mixing pot of Western/Eastern food culture, and you see that in both the restaurants and clientele. Do you like BBQ buns? Go to Tim Ho Wan (oh, yeah, it has a Michelin star), and lose your mind eating as many as you can. Or hit up Island Tang and revel in the retro "old Hong Kong" of 30 years ago while crushing steamed dumplings. Or maybe you're getting homesick (ALREADY?!!?), in which case Yardbird gastropub has a Canadian chef (Matt Abergel), incredible yakitori, and our vote for the drink with the best name in the city-state (the Bloody Kim Jong Il made with vodka, kimchi, and tomato). 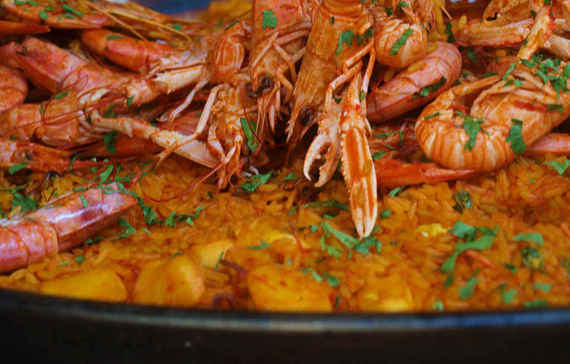 10. Barcelona, Spain
What you're looking for: Any of the Adriàs' new spots; as much jamón Ibérico as you can stuff in your face

Ferran and Alberto Adrià reshaped culinary thought with elBulli, but, since its 2011 shuttering, they've made Barcelona their culinary playground, wedding gastronomy to Catalan tradition in a surprisingly seamless move. Besides the bougie tapas dance at Tickets, there's Bodega 1900 -- with plates from, well, the turn of the century. There's also elBulli alum Albert Raurich's Dos Palillos, which blends tapas with Asian cuisine. But even without the toque bros and their offspring, Barca woos us hot and heavy with its stalls in La Boqueria -- gorgeous, marbled jamón Ibérica, fresh-pressed oil from Catalan olives, fresh fish from fourth-generation mongers -- and the less-tourist-filled Mercat de Santa Caterina that offers up just as much fresh bounty without the tourist swarm.

See the rest of the top 10 international food cities (hint: there are more from Latin America, the US, and Asia) -- all on Thrillist!