It was the month of January 2005. That Saturday night, a 17-year-old girl, by the name of Ayala Abukasis, was walking home with her younger brother, Tamir, in the southern city of Sderot in Israel. As they were walking, Ayala heard the shrill of an incoming Qassam missile fired from Gaza unto her city. She knew she had mere seconds to act, and so - without thinking twice or even trying to find shelter for herself - she hovered over her brother, covering him with her body, shielding him, as the missile hit the ground not far from where they were standing. Ayala was severely hurt and a few days later died in the hospital. The image seared into the minds of so many Israelis was that of Ayala's father and brother, standing solemnly by her grave, as her brother was blowing the Shofar (a ram's horn) in mourning of her passing.

This happened six months before Israel withdrew from the Gaza Strip, as Israelis have had to face the reality of missile attacks on civilians from Gaza for over a decade now. However, a hope for change emerged in that hot, humid and painful month of August 2005, when Israelis were promised a different future. Then, Israeli society had gone through the terrible ache of evacuating thousands of people from their homes in the Gaza Strip and part of the West Bank, in the hope of promoting the cause of peace with the Palestinians. "If only we do this", Israelis heard over and over again, "the World would know the sacrifices we are willing to make for peace. And if, G-d forbid, something bad may happen or if missiles continue to pour in on our heads from Gaza, oh then we will have the full legitimacy to fight back and defend ourselves. The World will understand".

This week the United Nations Human Rights Council's (UNHRC) Commission of Inquiry published its report on "the 2014 Gaza conflict". This was not the first report published on the situation in Gaza, an area which went from bad to worse when Hamas took it over by force in June of 2007. The UNHRC is an infamous entity when it comes to Israel. It is responsible for a series of one-sided resolutions against the Jewish State ever since the Council was established (2006) and has gone as far as to have Israel as a "Permanent Agenda Item" of the Council, an "honor" not shared by any other State on Earth. Therefore, it comes as no surprise that Israel, which has seen this bias take place for such a long time, refused to cooperate with its detractors at the Council.

The current report's validity is questionable, not only because of the biased "kitchen" it was concocted in. Many questions arise from the report on a factual level: it looks into the "hostilities" only from the day after 3 Israeli teenagers were abducted and executed by Hamas terrorists. It claims Hamas was responsible for digging 14 "tunnels of terror" into Israel, when Israel identified over 30 of those. The versions even differ when it comes to the number of Israeli casualties: this stood at 73 people, soldiers and civilians, while the report put it at 67 only. The inevitable question is: if they got the basic facts wrong, what else is there in the report, which actually "holds water"?!

However, it is vital that we look beyond and take into account the wider and more profound effect of this report, in addition to the state of affairs as it pertains to "Gaza 2014". The United Nations and the international community's behavior towards Israel, manifested by such biased and one-sided reports, erodes the very foundation for any potential opportunity to bring about a peaceful resolution to the situation on the ground.

Make no mistake: this is not about Gaza 2014, 2013 or 2012. This is about the Israeli public looking the international community "in the eye" and realizing that there will never be any real support for them, even at their time of need, when missiles are targeting innocent people and Israel is going on an operation of self-defense. By putting Israel and Hamas on the same level, this international community is telling Israelis that they are on a par with a terrorist organization, infamous for blowing up buses in Israel in the course of the 90's, killing hundreds of innocent people.

Is this the international community Israelis are later supposed to trust - again - when coming to an agreement with the Palestinians?! Think again. There's still time to change course. We all deserve a chance for a better future. 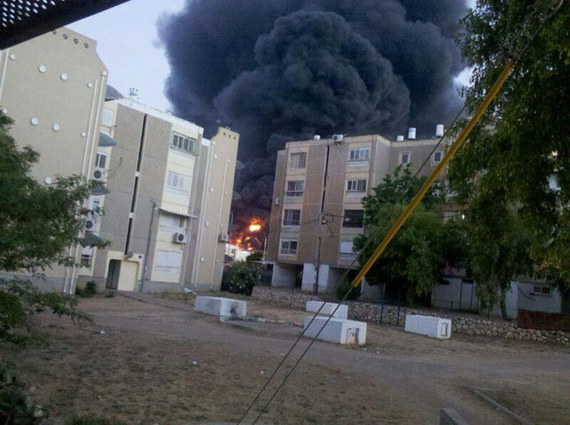