While computers have undeniably revolutionized the way people write, the typewriter remains a marvel-worthy object. Whether you appreciate their historic significance, their aesthetic beauty (the manual ones in particular are true objets d'art), or both, the Soboroff Typewriter Collection, currently viewable by the public at the Paley Center for Media in Beverly Hills, is a fascinating exhibit showcasing the most noteworthy collection of typewriters in the world. 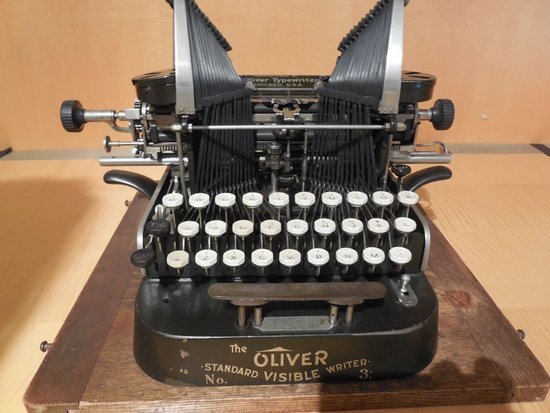 Each typewriter in the collection of 31 was once owned by the very famous -- including such luminaries as Ernest Hemingway, John Lennon, Orson Welles, Julie Andrews and Tennessee Williams -- or the infamous, such as Ted Kaczynski (aka The Unabomber) and Jack Kevorkian, the late euthanasia activist who was often referred to as "Dr. Death" in the media. As Steve Soboroff, the collection's owner, told me during a visit to the Paley Center, "I only collect typewriters from people who've been on the cover of Time magazine." Soboroff acknowledges that that's a slight exaggeration, as Jim Murray, the late Los Angeles Times sportswriter whose Remington Rand is included in the collection, wasn't quite that famous - he did, however, win a Pulitzer Prize for his sports commentary.

Part of the challenge of assembling a collection of pieces that belonged to typewriters is needing to prove beyond a reasonable doubt that they indeed belong to that person. Soboroff told me:

"It's almost like a crime scene. How do I prove these are real? It's forensics. Some are easier than others. I spend half the time proving that it's authentic and half the trying to prove that it isn't. But typewriters, like people, have fingerprints. When you have typescript, you can blow it up and send it to a lab. Even when they make 100,000 of one typewriter, the typescript on each of them is a bit different."

Sometimes it's easy to prove, such as when he buys a typewriter from the owner's relatives, or directly from the FBI, which was how Soboroff acquired the Montgomery Ward portable that belonged to the Unabomber. Artifacts accompany each typewriter on display at the Paley Center, such as photos of the previous owners using the machines, or the original purchase receipts.

Though Soboroff cherishes owning these pieces of history, it's in no way just about him -- the collection helps raise money for charity. People can pay for the rare opportunity to type on a typewriter that belonged to the likes of Truman Capote, Marlene Dietrich, Rudolph Valentiono, Tom Hanks or George Bernard Shaw, with all proceeds going to charitable causes.

Enjoy this rare chance to view this amazing collection in its entirety while it's on display free of charge at the Paley Center through early 2016.