By Alyssa Bird for Architectural Digest.

From rooftop sensations to saltwater stunners, the pools are the main attraction at these extraordinary resorts around the world. 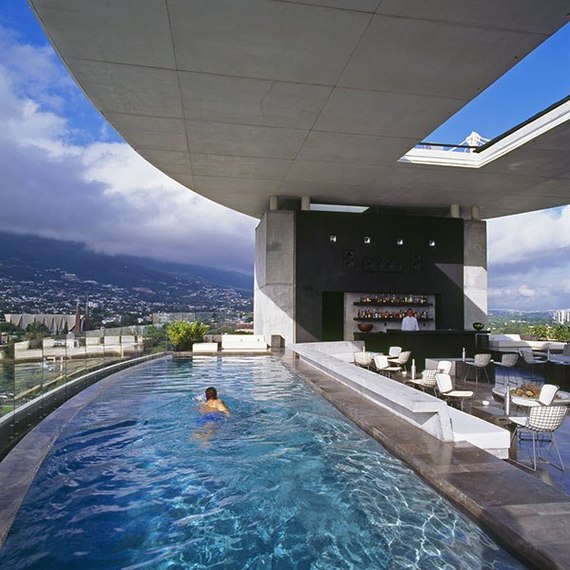 Architect Agustin Landa created a dramatic setting atop Hotel Habita in Monterrey, Mexico, by placing two infinity pools under a sculptural concrete canopy. Have a drink at the bar separating the pools and enjoy 360-degree views of the surrounding mountains. From $210/night; hotelhabitamty.com. 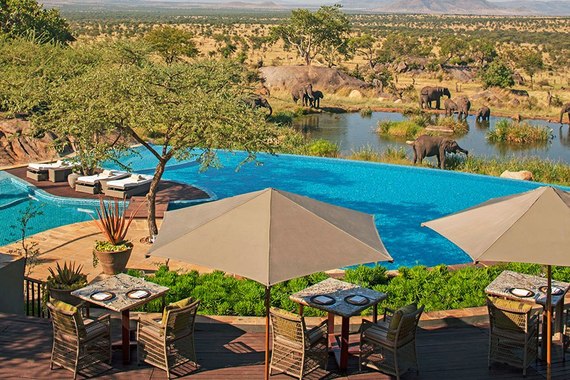 Guests at the Four Seasons Safari Lodge in Tanzania's Serengeti National Park can be part of the action without leaving the resort's pool, which overlooks a watering hole frequented by local wildlife as well as the plains beyond. From $1,000/night; fourseasons.com 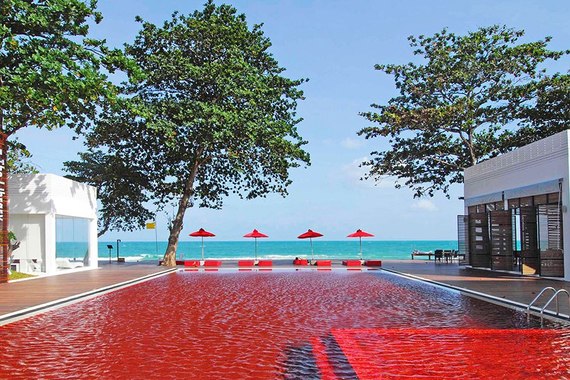 Near Chaweng Beach on Thailand's idyllic Koh Samui island, the Red Pool at the Library hotel beckons guests with its mesmerizing mosaic of yellow, orange, and red tiles. From $282/night; thelibrary.co.th. 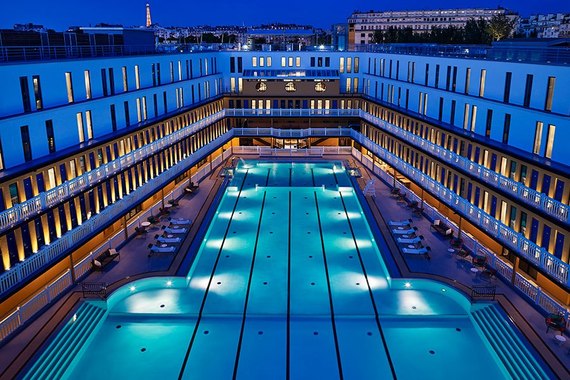 (photo: courtesy of The Molitor)

Conceived as a public swimming complex in 1929, Paris's Piscine Molitor was a popular hangout for the city's fashionable set until it shuttered in 1989. A group of design firms were commissioned to reimagine the historic site, which reopened last year as the Molitor hotel. Architect Jacques Rougerie renovated both the indoor and outdoor pools, being sure to preserve their iconic Art Deco flair. From $281/night; mgallery.com 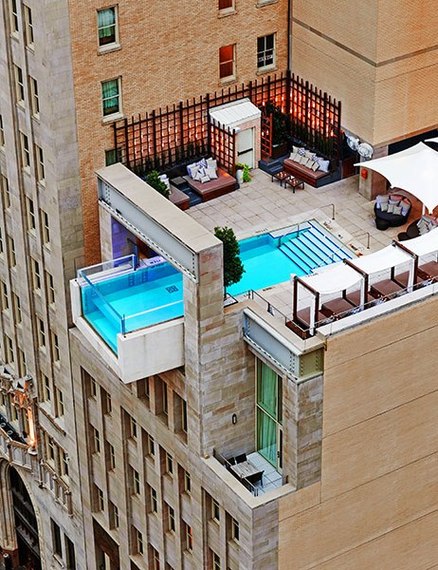 The Joule Hotel, which occupies a 1927 building that was formerly the Dallas National Bank, unveiled an expansion and renovation last year that included the addition of a sleek cantilevered rooftop pool. Its glass wall provides an unforgettable view of the city below. From $250/night; thejouledallas.com.

See more: The Coolest Floating Architecture Around the World 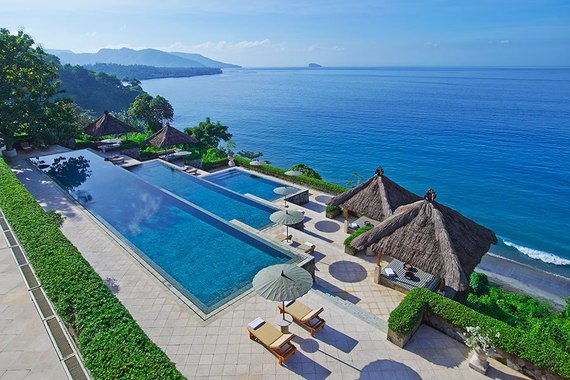 Perched on a cliff near Manggis on Bali's peaceful eastern coast, Amankila is one of three Aman properties on the Indonesian island. The resort's three-tiered pool recalls the terraced rice fields that are prevalent in the region. From $700/night; amanresorts.com. 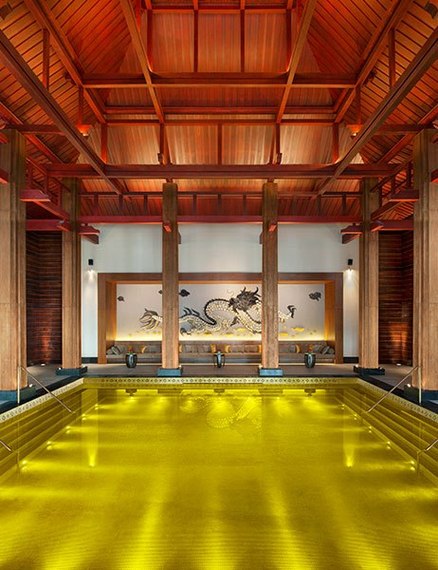 Gold tiles crafted by a local artist add a magical glow to the spa's Gold Energy Pool at St. Regis Lhasa in Tibet. The pool area, which features a vaulted ceiling and wood beams, overlooks the resort's lake and Himalaya Palace--formerly the residence of the Dalai Lama. From $245/night; starwoodhotels.com. 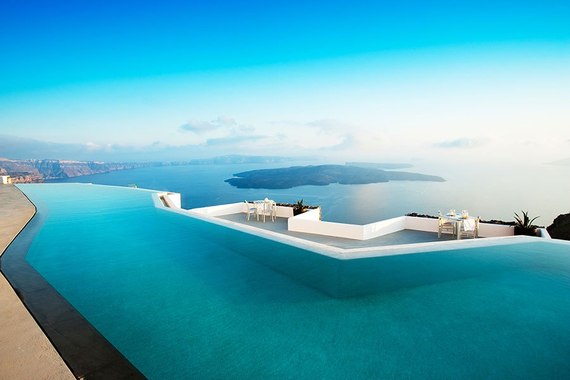 It doesn't get much better than the view from the Grace's pool, atop the caldera on Greece's popular island of Santorini. The hotel, located in the village Imerovigli, between the larger towns of Oia and Faro, is also the perfect base for exploring. From $436/night; gracehotels.com. 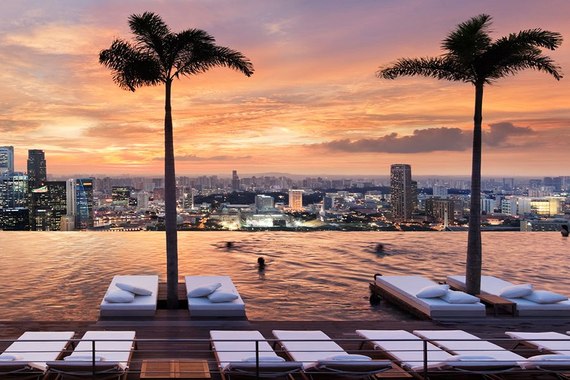 Designed by renowned architect Moshe Safdie, this example at Singapore's Marina Bay Sands is one of the largest rooftop pools in the world. And at 57 stories up, it offers one of the best views, too. From $383/night; marinabaysands.com. 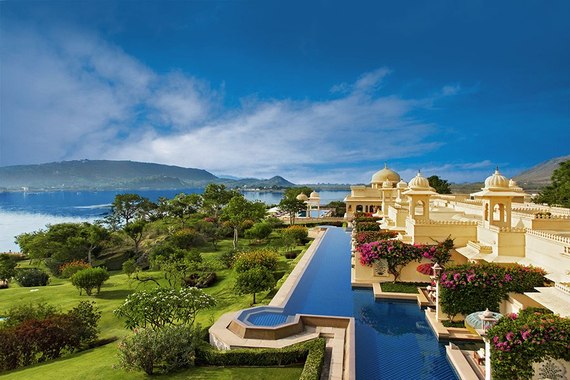 Occupying 50 acres on Lake Pichola in Udaipur, India, the Oberoi Udaivilas hotel features a series of private and semiprivate pools inspired by the city's interwoven lakes and canals. From $825/night; oberoihotels.com. 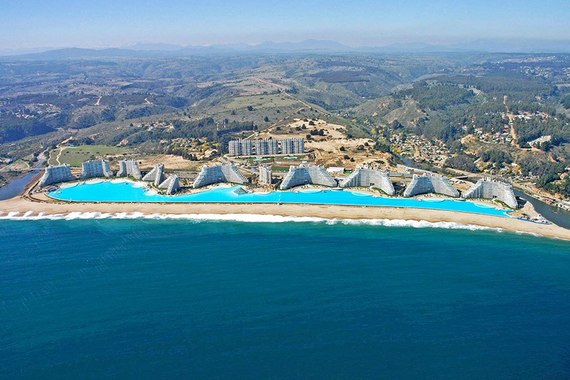 San Alfonso del Mar in Algarrobo, Chile, is home to the world's largest outdoor pool. Stretching over half a mile, the pool--filled with filtered ocean water--is also 11.5 feet deep. From $300/night; sanalfonso.cl.

10 New Exotic Retreats Around the World