The following post is the second of a series of excerpts adapted from Unlatched: The Evolution of Breastfeeding and the Making of a Controversy by Jennifer Grayson, which will be out from HarperCollins on July 5 (available here). Image credit: Charles Beaubrun [Public domain], via Wikimedia Commons 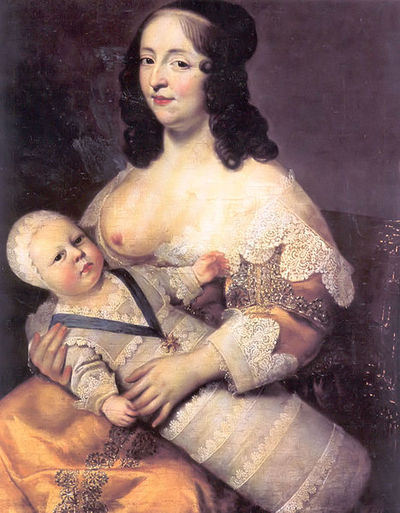 Even before the advent of commercial infant formula, mothers were making personal choices about how to feed their babies. Nearly all children may have been breastfed, but they didn't necessarily have to be breastfed by their own mothers.

Next to prostitution, wet-nursing (being hired to breastfeed another woman's child) is perhaps one of the world's oldest professions for women; nearly every advanced civilization employed some version of it. There are countless examples: a Sumerian lullaby from 3000 BC makes mention of a nursemaid suckling; King Tut built a lavish tomb to honor his own wet nurse; Islamic law views two children having suckled milk from the same woman as a lifelong form of kinship equal to that of a blood relative; ancient Romans could bring their hungry infants to the Columna Lactaria for a nursing; and in the medieval kingdom of Castile, wet nurses for royal children were hired for one or two decades and became governesses after weaning. In fact, Mammy -- the house slave character in Margaret Mitchell's Gone With the Wind -- wasn't just the servant who raised Scarlett O'Hara; Mammy had been Scarlett's wet nurse. (More on that conflicted arrangement in a moment.)

From antiquity through the Middle Ages, a wet nurse was often a convention only for royalty or the very wealthy; most healthy women breastfed their own children. Of course, wet nurses were also employed for abandoned children or when a mother died and left a nursling behind or when she couldn't nurse for medical reasons. (If you ever have a day when you feel like a bad parent, consider the case of Greco-Roman Egypt, where unwanted babies were often tossed on trash heaps and you could snag one for a cheap slave by "saving" it and hiring a wet nurse to feed it.)

By the Renaissance, the wet nurse as status symbol had begun to trickle down to the merchant classes. Employing a wet nurse became so commonplace by the seventeenth and eighteenth centuries in certain parts of Western Europe that a mother feeding her own child was considered strange except among the very poor. Sometimes, even wet nurses themselves hired other wet nurses; they would hire themselves out to a wealthy family and then send their own babies to a less expensive wet nurse out in the country, living on the difference.

Still, just because people were perpetuating the practice of wet-nursing didn't mean everyone was OK with it. For many, the biological predilection to feed one's own offspring seemed obvious, and in second-century Rome and Greece, philosophers including Pliny and Plutarch spoke out against the practice of wet-nursing among the wealthy. They called attention to the severed bond that resulted between a natural mother and her child, and they even believed that a child could imbibe the physical and mental qualities of the wet nurse via her milk. (This belief persisted through the nineteenth century. In light of a recent study by Harvard (now ASU) evolutionary biologist Katie Hinde, which revealed that baby monkeys' personalities were altered by the cortisol they absorbed from their mother's milk, perhaps the ancients weren't too far off the mark.)

Preachers and physicians of the Middle Ages advocated maternal breastfeeding, calling attention to the deep connection and love that developed between a nursling and whoever suckled him -- even if that woman was not his birth mother. And later, in Colonial America, the Puritan Reverend Cotton Mather implored women to nurse their own children, admonishing them not to become "one of the Careless Women, Living at Ease." (Never mind that he himself was wet-nursed, as were some of his fifteen children.)

Although most Puritans as well as most women in the northern colonies breastfed their own babies (the former viewing it as their duty not just to their children but to God, as well), wet-nursing in Colonial America was certainly common enough to elicit Mather's opposition. Wealthy New World settlers from Spain and France, accustomed to hiring wet nurses of lower social status in their home countries, turned to Native American women, who were viewed as inferiors, to serve as wet nurses. The city of Boston and its surrounds became a thriving market for women seeking employment as such. By the eighteenth century, breast milk was the most frequently advertised vendible in Colonial newspapers.

The wet-nursing business wasn't a boon to everyone, of course. In the South, the maternal bond turned maternal shackle in the role of "Mammy." On the plantations, black slave women were stripped of all reproductive rights and exploited to suckle the children of their white masters. The breastfeeding was almost always at the expense of the enslaved women's own children, who either were brutally confiscated or else died as the result of their mothers not being able to feed them regularly. Those slave children who did survive were allowed virtually no connection with their mothers, and weaning was forced early so that slave women could conceive additional slave children (often upwards of fifteen in a lifetime) for their master. Whether it's conscious or not, the emotional scar of this unfathomable history could be one of the reasons why African American women have the lowest breastfeeding rates in the country. And the health of African American children continues to suffer as a result. Black babies are twice as likely to die before their first birthdays as white babies, and as older children, black youth suffer markedly higher occurrences of obesity and asthma.

Yet perhaps nowhere else on earth at any point in history did wet-nursing reach the degree it did -- where Mather's "maternal duty" was turned more on its head -- than in eighteenth-century France. There, the business of wet-nursing became so rampant, so nearly universal, that a Parisian police official, Lieutenant General Jean-Charles-Pierre Lenoir, was placed in charge of supervising the referral bureaus parents used to find wet nurses.

Lenoir's comprehensive 1780 survey of the twenty-one thousand babies born in the city that year shows that only about 3 percent were breastfed by their own mothers. Another 3 percent or so were fed by hired wet nurses in the homes of the wealthy, with a greater minority of privileged children nursed near their parents' homes. But the vast majority of wet-nursed tots, either castaways or those born to the middle and lower classes (some fifteen thousand infants in that year alone) were placed in foundling hospitals or were shipped off mere days after birth to the countryside, to be nursed and ostensibly nurtured by a stranger who likely corresponded with the birth parents only a few times before returning the child upon weaning years later -- or who would send but a note in the event that the child had died. And there were many, many deaths...

More on mankind's experimentation with infant feeding to come. Excerpt from Unlatched: The Evolution of Breastfeeding and the Making of a Controversy. Copyright © 2016 Jennifer Grayson. Reprinted with permission from HarperCollins.