The world is rapidly becoming urban. More than half the world’s 7-plus billion people live in urban areas (urban cores, suburbs and small towns). Nearly a quarter of the population lives in “cities” of a million or more. Eight percent reside in megacities — urban areas of at least 10 million. And that percentage rises with each new megacity.

What is a City?

Demographers use a slew of terms to reference cities and urban areas. Plainly speaking, urban areas are the continuously built up areas that would be seen in the outline of city lights from a high-flying airplane on a clear night. The New York urban area, for example, contains suburbs in three states but would not contain commuter exurbs separated by rural land. To keep it simple, I will use “cities” to denote “urban areas,” which is one of two generic definitions (the other definition is the metropolitan area, which includes areas outside from which people commute).

Massive cities are a modern phenomenon. According to census historian Tertius Chandler, none of the ancient cultural powerhouses — Athens, Rome, Alexandria, or the Chinese capitals such as Chang'An (modern Xi'an) — reached a population of one million. Prior to the Industrial Revolution, Baghdad alone reached a million, in 925, only to suffer catastrophic losses. For nearly a millennium, famine, wars, and disease prevented cities from reaching one million. (Americans are aware that transported disease decimated the American native population. Most don’t realize that waves of transported diseases, especially bubonic plague and smallpox, laid waste to Europe, Asia, India, and the Middle East in turn. The cities were the most vulnerable.)

By 1775, Beijing’s population had grown to one million, a level reached in London by1825. The world was a much poorer then. Since that time there has been an unprecedented improvement in the standard of living. Between 1820 and 2010, gross domestic product (GDP) per capita, rose 10 times, according to the Angus Maddison project (inflation-adjusted). This economic progress has been associated with urbanization, which increased first in the now high income world and is spreading in the lower income world, where there have been significant reductions in poverty. That, combined with advances in agriculture, public hygiene, and medicine has made large cities possible.

There are now about 500 cities urban areas of more than one million. According to our just released Demographia World Urban Areas, Tokyo-Yokohama, the world’s largest city, has 30 times the population of Beijing in 1800. And, Beijing itself has reached 21 million. Beijing remains one of the ten largest cities, but London with a population of 10 million ranks 32.

New York, whose population reached 10 million by 1930, was the world’s first megacity. Tokyo-Yokohama displaced New York by 1955. The rapid growth of Tokyo-Yokohama made it double the population of then second ranked New York in 1990. Today, New York with a population of 21.6 million, ranks 9 among the 34 megacities. Tokyo, with 37.8 million people, remains the world’s largest city with second ranked Jakarta rising rapidly at 30.6 million. Mexico City, which by 1975 was the third city to reach 10 million population, now ranks number 12.

Contrary to popular perception, Delhi, not Mumbai, is India's second largest city, and the world's third largest, at 25.0 million. Manila is close behind, at 24.1 million, having recently passed fifth-ranked -Seoul-Incheon (23.5 million). The estimates for Jakarta and Manila are higher than reported by other sources, which exclude the sizeable urbanization extending across the boundaries of the national capital territories (DKI Jakarta and Manila's National Capital Region).

Three of the top 10 megacities are in high income countries: Tokyo-Yokohama, Seoul-Inchon, and New York. Shanghai (23.4 million), Beijing, and Guangzhou-Foshan (20.6 million), are in middle-income China. The remaining top ten megacities of Jakarta, Delhi, Manila, and Karachi (22.1 million) are low income (Figure: 10 Largest Cities in the World: 2015).

Meanwhile, former growth leaders Mexico City and Sao Paulo have been pushed out of the top ten. 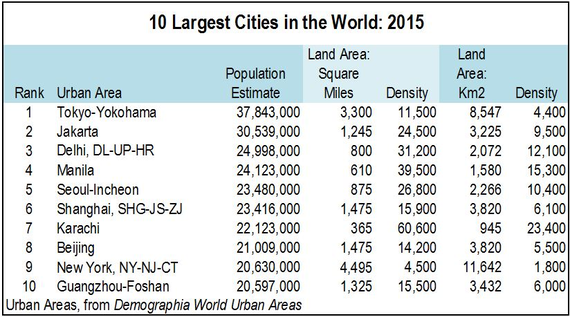 Where the Urban Population Lives

The rush toward urbanization is expected to continue. The United Nations forecasts a 1.1 billion increase in the urban population of the world in just 15 years. By 2030, 60 percent of the world’s people live in urban areas. And, by 2050, two-thirds of all people will reside in cities. Approximately 95 percent of the urban growth —almost all of the new megacities — is expected to be outside the high-income world.