By Gabe Habash for Publishers Weekly:

In 1987, The Book Services Ltd published a slim, 144-page cookbook called "Microwave for One." The book is by Sonia Allison, who has quite a few publications under her belt. But she’s best known for her masterpiece of tragedy, a book whose title and cover is so rife with sadness that one almost has the urge to brush the invisible tears from Ms. Allison’s face as she leans over her microwave and her food spread. 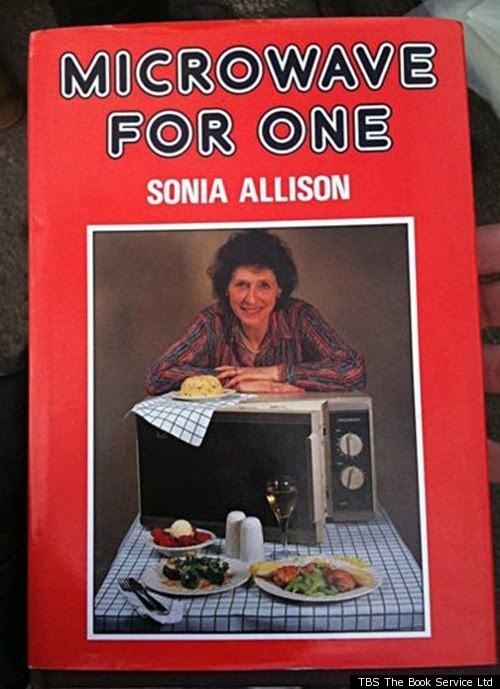 Very little is known about the contents of the book, except for the few that have been lucky enough to chance upon a copy. Let’s turn to these Amazon customer reviews for some insight.

“After the divorce” by Benjamin L. Hamilton

After the divorce my diet consisted primarily of uncooked ramen and whiskey. Occasionally I wondered aloud if I’d ever have another home cooked meal again.

Then I discovered “Microwave for One” and everything changed.

My favorite chapters were:

Chapter 1: Plugging in your Microwave and You

Chapter 4: How to Wait 3 Minutes

In closing, I give this book 2 thumbs up (and a paw!). Thanks Sonia Allison!

“Would have starved to death if not for this book” by Michael B.

Several essential parts of my furnace and my small portable stove had been stolen by my erstwhile wife, Lulu, and her accursed teenage consort (damn you both!) along with all of our blankets and my collection of antique cat food lids. With no funds to purchase a replacement, and being unable to produce anything edible from that most complicated and infernal of modern inventions (the microwave), I often resorted to eating bits of roadkill in the corner of my shed while trying to warm myself in a cocoon of shredded newspapers.

I found this book in a dumpster behind the local Taco Bell/KFC-combo franchise. It saved my life. Now, when I hold my gun to my forehead and rock slowly back and forth every night, keening with loneliness and despair, I am at least doing so with a belly full of salvation army rations seasoned and microwaved to perfection.

If only it could make the pain stop.

“The book I’ve been waiting for” by Michael Senn

Ever since La Verne was killed in the thresher, my microwave has sat unused, as I only ever knew how to cook for two. But now, thanks to the magic of Sonia Allison’s inspirational tome, I have rediscovered the joy of living, loving, microwaving. I have accumulated enough empty boxes of Swanson Microwave Chicken to assemble them into life-sized sculptures of my grandchildren, with whom I dine each Tuesday.

As a huge fan of 1000 and 1 Ways to Cook Ground Beef (Although I use 9-Lives chicken flakes – doctor said no red meat), and What’s Really Cooking at Git’mo, I found Microwave Cooking for One an indispensable addition to my library. It and a serviceable Microwave oven were culled from the recycling area of the dump. What a gem! With a pocket calculator I figured out how to cook for more than one, and have started my own catering business. You can do a party of 16 or so out of one oven but it takes a lot longer than you’d think, and the outsides get a little chewy. My advice here is to get some cribbage boards and cards (from a flea market or your grammy) and serve cocktails while the meal is radiating. If you sell some tickets ahead of time you can score a half gallon of coffee brandy, some milk and if it’s really special some non-dairy hazelnut creme. Sonia’s recipes are some of the most economical I’ve seen, and in these tough times you can put smiles on the faces of your new customers and a few dollars under the mattress! After the meal it’s time for Walker, Texas Ranger on the VHS for that old timey family vibe! Thank you Sonia!

“Buy this book, or don’t, I don’t care anymore” by Michael Pemulis

It used to be that I got home from work and the only thing I’d want to put in my mouth was the cold barrel of my grandfather’s shotgun. Then I discovered Sonia Allison’s Chicken Tetrazzini, and now there are two things.

“Best thing ever after alien abduction” by Louis Green

I have been abducted by aliens 16 times during the past 3 ½ years. After the probes and biopsies it is really comforting to open up the book I treasure most of all – Sonia Allison’s Microwave For One.

Yes her Chicken Tetrazzini recipe is amazing, but a little run-of-the-mill for me. I am an adventurous foodie, so I go straight to the gourmet section. Popcorn with hot water is my go to dish every time I want to impress my imaginary girlfriend and her family. I have served them every recipe in the book and they always ask two things. What’s my secret and can I give them some to take home.

I plan on popping the big question soon, and you better believe Sonia Allison will be right there with me! Ssshhhh… Not so loud the guards are coming!!!

In addition to these reviews, the Random Eats blog tested out one of the book’s recipes. Check it out here.

Little else is known about the book. But we do know that 12 years after "Microwave for One"'s publication, a sort of turf war for solo microwaving dominance occurred when one Marie Smith, a spunky up-and-comer in the microwave cuisine arena, published "Microwave Cooking for One."