An American multi-national corporation, which accepts millions of dollars in government funds, pays its top executives more than half a million dollars per year in total compensation, while simultaneously paying some of its employees less than the federal minimum wage.

And the entire racket is perfectly legal thanks to a Depression-era loophole in federal labor law. Is now a good time to mention that this corporation also doesn't pay any taxes?

"Goodwill Industries is one of the most well-known charitable organizations in the United States, but most members of the general public are unaware that Goodwill exploits people with disabilities," said Dr. Marc Maurer, President of the National Federation of the Blind, which has organized a nationwide protest of offending Goodwill organizations. "We are conducting informational protests to make the public aware of this practice that, although sadly still legal, is unfair, discriminatory, and immoral."

That the workers are people with disabilities only serves to make this labor exploitation worse. Individuals that are most in need of legal protection from employment abuse are being mistreated by a nonprofit organization that claims its mission is to serve the disabled and disadvantaged.

Under Section 14 (c) of the Fair Labor Standards Act of 1938, employers can apply for a special wage certificate that allows them to hire people with disabilities at a subminimum wage. Nationally, more than 300,000 workers are subjected to the law. Goodwill uses the special minimum wage exemption to take advantage of 7,300 of its 105,000 employees.

Brad Turner-Little, Director of Mission Strategy at Goodwill International, Inc., defended the practice as one of Goodwill's "tools" to help the disabled.

"With 80 percent of working age adults with disabilities in our country not participating in the workforce currently, we believe that it's important to explore more types of opportunities," Turner-Little told me. "The special minimum wage certificate is a tool to create employment for people with disabilities. It's not the only tool."

Goodwill has repeatedly said, "Without the law, many people with disabilities could lose their jobs." The nonprofit emphasizes that these are "employees whose disability significantly impairs their productivity." Why are the disabled singled out with the most rigid productivity assessments? After all, the federal minimum wage protections that you and I receive aren't tied to our productivity.

"Subminimum wage, as enforced by Section 14(c) of the Fair Labor Standards Act of 1938, is wrong because it creates a double standard for how employees, particularly employees with disabilities, should be paid, by offering 'special wage certificates,'" points out Andy Voss, president of the Autistic Self Advocacy Network of Sacramento, which organized a protest outside of a Sacramento Goodwill store in August (pictured below). "It is appalling that organizations that purport to assist workers with disabilities in job training, would hold them back by circumventing the standard of living that minimum wage provides other American workers." 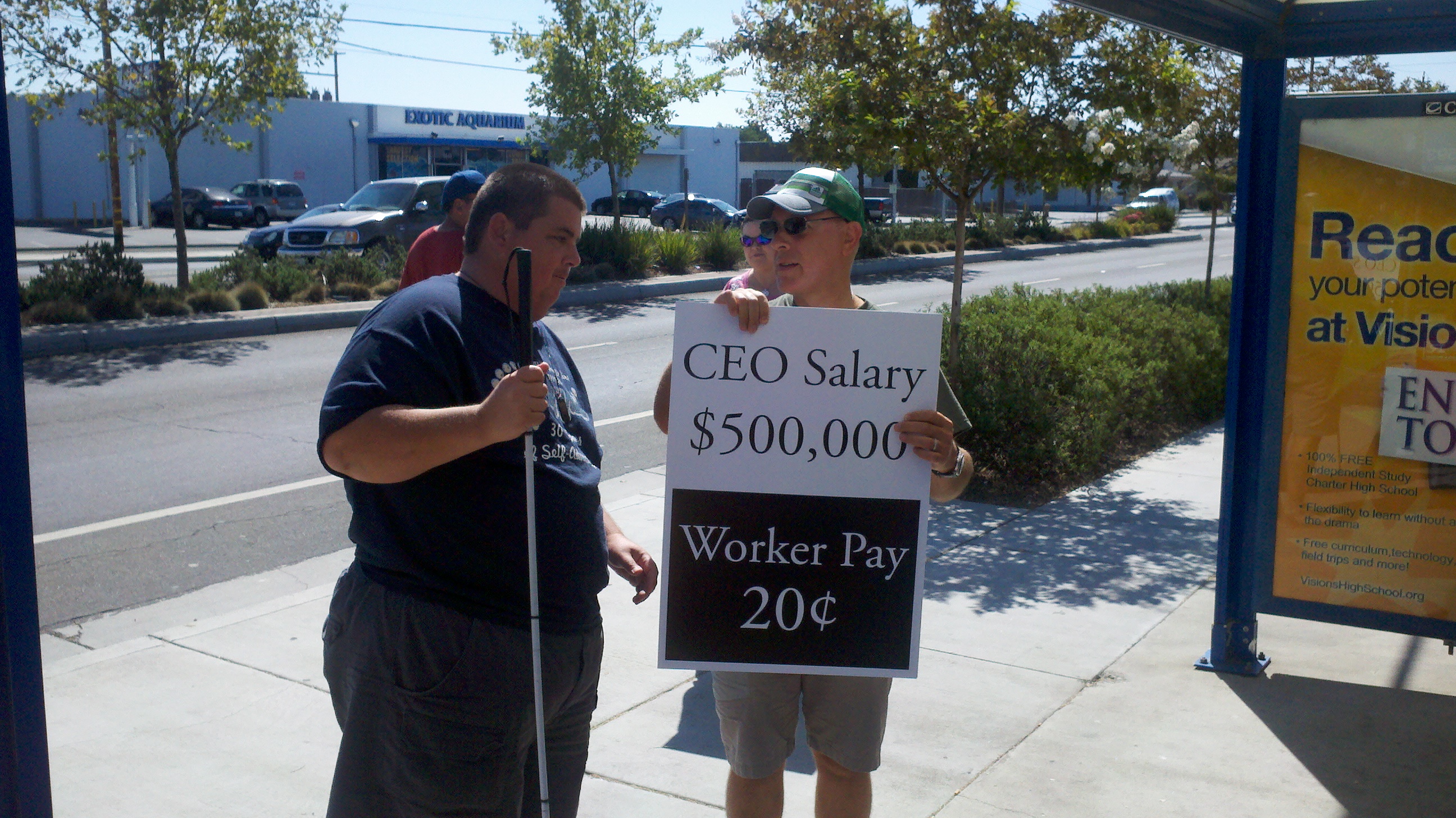 Of course, the very premise is wrong. Disabled people aren't inherently less productive employees. Samuel R. Bagenstos, a professor of law at the University of Michigan Law School and a former deputy attorney general for civil rights, has written "The Case Against the Section 14(c) Subminimum Wage Program." He cites examples of how workshop employers automatically assigned jobs "without any connection to the abilities and background of the individuals." One college educated woman with cerebral palsy was paid three dollars per week to assemble rubber mats, according to a former federal rehabilitation commissioner cited by Bagenstos.

If people with disabilities are well-qualified and productive employees, why continue the policy?

Last year, a former Goodwill executive was sentenced to 70 months in prison for embezzling $1million from MERS/Missouri Goodwill Industries Inc., according to the St. Louis Post-Dispatch. In California, smaller charities, such as D.A.R.E. America, say that Goodwill has acted like a nonprofit bully and is currently using powerful lobbyists to shut down their clothing donation programs.

In 2010, Goodwill Industries International, Inc., the national parent corporation for all of the nation's secondhand clothing affiliates, paid its president and CEO James Gibbons more than half a million dollars in compensation. And dozens of state and local chapters copied the national headquarters' executive extravagance. Here's a rundown of the recent executive compensation packages for the three Florida-based Goodwill organizations that pay some employees less than minimum wage:
In California, these five Goodwill organizations exploit the special minimum wage exemption and pay executives top-dollar. A short sample of some executive compensation packages over the past few years:

Tommy A. Moore, Jr., Goodwill Industries International's board chair Goodwill's board chair, says, "The board goes through a rigorous process to determine his compensation based on the impact of his leadership, strategic goals and performance."

But, what he doesn't tell you is that the CEO's annual review is less rigorous than the corporation's review of subminimum wage employees, who are evaluated every six months, or sometimes even more frequently. Turner-Little, a spokesman for Goodwill Industries International, Inc., described to me the "lengthy" and "extensive" process.

"It's a fairly lengthy process," he explained of the subminimum wage employee review process. "Every six months, an individual who is paid under a special wage certificate, their productivity has to be assessed at least every six months. Often times employers will do it more frequently than that. And all that has to be documented and made available to the Department (of Labor) if they need to see it."

The employee evaluations are just one component of a lengthy administrative process required by the Department of Labor in order for an organization to maintain its minimum wage exemption.

According to the Goodwill national spokesman: "In order to receive a Special Minimum Wage Certificate from the Department of Labor, a business has to go through an application process, which is fairly extensive, identifying the types of jobs that the special minimum wage certificate will be applied to, provide evidence of having surveyed local companies to determine what the prevailing wage rate is for the specify jobs that are being performed so that accurate computation of the commensurate wage rate can be determined."

After Goodwill has surveyed at least three companies for comparable wage information data, the organization must evaluate individual employees.

"They have to outline their individual productivity assessment process for the jobs that are going to be paid under the special minimum wage certificate and that has to be done both for service type jobs as well as piece rate work- so hand assembly type work, making a product as well as providing a service," Turner-Little said. "Then, (they) have to outline what their time-study process is going to be, all of that is contained in the application process."

Work center certificates, the type Goodwill says it uses, can only remain in effect for two years. Then, the process starts over again, but not without adding all the previous data to the new Department of Labor application.

"Prior to the certificate running out, then they have to go through a reapplication process, with all of that information again, as well as all the data. If they have had the certificate in the past, the use of that certificate, the number of employees, the types of jobs that were performed, and provide evidence to the department that they have implemented the certificate in compliance with expected regulations," Turner-Little said.

Which begs the question, why is Goodwill spending so much time and money on this bureaucratic nightmare? Remember, Goodwill claims that the sub-minimum wage policy helps them save money and hire more workers.

So, what's being done to correct this injustice?

Rep. Cliff Stearns, R-Florida, has introduced H.R. 3086, the Fair Wages Act, to stop the practice, which he calls "deplorable and wrong." But, Stearns' office says that the bill is stalled in the House Education and the Workforce Committee, chaired by Rep. John Kline, R-Minn.

"If a hearing is not scheduled early this fall, the measure will likely be re-introduced in the new Congress," Stearns wrote to me via email. And if that happens, Stearns won't be around to help. Last month, the 12-term Congressman was defeated in the Republican primary by a Tea Party challenger.