Editor's Note: This piece was co-authored by Susan and her 10-year-old daughter, Morgan

I was eight years old. No one had ever hurt me intentionally. I had never kept a secret from my mom and I didn't know what the word "clinically depressed" meant. I had just started third grade and I loved it. I got the teacher I wanted and all of my friends were in my class. I even met a new friend. She seemed really nice at first. But then she started wanting me to only play with her. She would try to keep me away from my other friends. Then she pulled my hair and pinched the back of my neck and was always following me around so that I was afraid to not do what she wanted to do. She would find me no matter where I went to get away from her.

School started not to be fun anymore. I was always worried about what she was going to do to me if I didn't do what she said. I started having stomach pains every day and I felt nervous every morning. I didn't tell anyone. I was afraid that would make it worse. I didn't tell my mom. But she figured it out.

After that my mom helped me to figure out what to do. She explained that people aren't always what they seem. She said bad things happen in life and we can choose to ignore it, blame others or be part of the solution. She said that together we could make things different for me and maybe even for other kids. I really liked that idea. 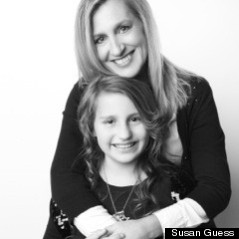 Susan Guess and her daughter Morgan.

So we started to have events in our town and at our school and now we have met so many other girls and boys who have been bullied. And now I'm not taking any medicine. I know I can stand up for myself and be myself. And I know that one person can just be kind to one other person and it will change everything.

Fear began to creep into my heart. I knew something wasn't right but I didn't know what. My eight-year-old daughter was showing signs of reluctance about school, which was very unusual. She normally loved going to school and being with her friends. As it turned out one new friend in third grade was becoming a problem. We'll call her Mary.

I, like most parents, do all I can to protect my child. When she was born I moved to a flexible work schedule so I could be with her before and after school. I volunteer, I work hard to make our time together meaningful and productive and my husband and I are devoted to quality family time. I, perhaps naively, thought I could protect her from the worst elements in the world.

One day I took refreshments to the playground and noticed a little girl with her hands always on Morgan -- holding Morgan's hand, fiddling with her hair, sort of leading her around. It made me somewhat uncomfortable but Morgan said nothing that caused me to be alarmed.

I started asking questions and began getting answers I didn't like. So one day after picking Morgan up at school I asked her if Mary had ever done anything unkind to her. Morgan reached up from the back seat and pinched me hard behind the neck under my hair. Then she told me about the numerous control moves that Mary was using to try and control Morgan's actions. I tried to remain calm but my heart was racing. My child was afraid at school and it seemed to be out of my control.

I spoke with school administrators and they promised to try and keep the girls apart. But the bullying continued. I soon witnessed the intimidation myself and it became apparent that the separation wasn't an effective plan. Then Morgan began to talk about the fear and isolation she was feeling. Mary was racing to the playground so that she could separate all the other girls from Morgan. Her school work started to slip. Morgan started to have what her doctor termed as "stomach spasms" and panic attacks and eventually our pediatrician concluded that she was "clinically depressed." He prescribed anti-depressants and suggested that we remove her from school describing her as emotionally unsafe there. But Morgan didn't want to leave her school.

I remember asking Morgan how she felt when she felt her worst. She told me that she didn't want to die because she was having a bad day. That was a startling statement for me. My brother, who was bulled also at the age of eight, took his own life at the age of 33. I knew we had to do something so that bullying didn't have a devastating impact on my family once again.

While we will never forget this painful experience, we will not let it define us. We are not victims. We are change agents. This unfortunate experience has now made us better people and, we hope, people who can make the world better for our child and other children around our community and our country.

There were people who disappointed us because they let fear get in the way of protecting a child. There were those who believed we were making a school look bad and I could feel the undercurrent of wishing I would stop talking. There were times when their rhetoric crept into my mind and I began to question myself. I realize now that this is all a part of a cycle of bullying that we have to fight through.

We have learned many lessons these past two years. The greatest lesson is that we now understand that we have a voice, and we can use it for good. We can make a difference.
We are now focused on our interactions with other people. We work to make sure people feel good and happy when they are with us. We reach out to spread kindness, recognizing they are small acts with a powerful impact when they are multiplied.

Bullying changed our lives forever; thankfully not in a tragic way. We are so very grateful that our story has a happy ending. Others have not been so fortunate. That is why we believe, with our whole hearts, that each of us has a stake in this cultural revolution. The world can be a kinder place. We believe that begins with us.