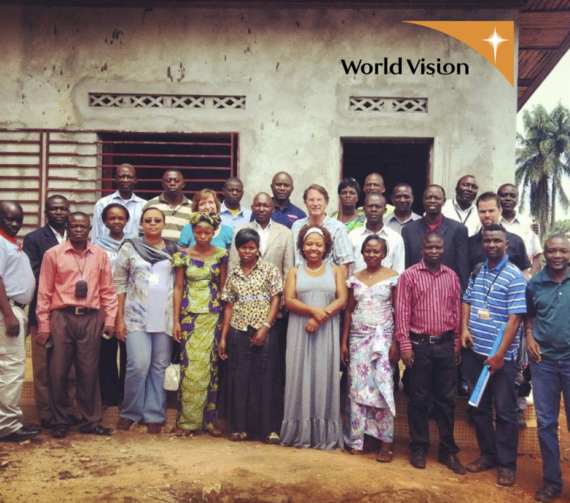 On March 24th, 2014 Rich Stearns, CEO of World Vision USA made an historic announcement: they would hire gay Christians in same-sex marriages.

That day he offered an exclusive interview to Christianity Today:

"Changing the employee conduct policy to allow someone in a same-sex marriage who is a professed believer in Jesus Christ to work for us makes our policy more consistent with our practice on other divisive issues," he said. "It also allows us to treat all of our employees the same way: abstinence outside of marriage, and fidelity within marriage."

Stearns took pains to emphasize what World Vision is not communicating by the policy change.

"It's easy to read a lot more into this decision than is really there," he said. "This is not an endorsement of same-sex marriage. We have decided we are not going to get into that debate. Nor is this a rejection of traditional marriage, which we affirm and support."

"We're not caving to some kind of pressure. We're not on some slippery slope. There is no lawsuit threatening us. There is no employee group lobbying us," said Stearns. "This is not us compromising. It is us deferring to the authority of churches and denominations on theological issues. We're an operational arm of the global church, we're not a theological arm of the church.

"This is simply a decision about whether or not you are eligible for employment at World Vision U.S. based on this single issue, and nothing more."

Two days later, under immense financial pressure and criticism from gatekeepers on the evangelical right, World Vision USA reversed their decision, breaking hearts, promises and leaving an utter leadership vacuum on one of the church's most divisive issues.

Franklin Graham, the same man associated with anti-LGBT laws in Africa, who also supports Putin's chokehold on LGBT rights and dissidents in Russia, said this two years ago about World Vision:

World Vision maintains that their decision is based on unifying the church -- which I find offensive -- as if supporting sin and sinful behavior can unite the church. From the Old Testament to the New Testament, the Scriptures consistently teach that marriage is between a man and woman and any other marriage relationship is sin.

When they caved, World Vision was, in essence, saying they would rather stand with ministers of hate and religious motivated violence rather than be ministers of reconciliation.

Where does it leave us today? A scattered, resilient younger generation looking to step into the wreckage for a more hopeful, inclusive church.

Full disclosure: I was a paid World Vision consultant on a project with the Evangelical Covenant Church in the Democratic Republic of Congo. I remain fiercely proud of that work. World Vision's community transformation model not only saves individual lives, but helps build flourishing communities.

I left that role to plant a new church in Portland, Oregon -- one of the least churchgoing cities in the US. Also one of the gayest.

Less than a year after World Vision's 48 hour affirmation-then-denial of LGBT inclusion, our church was kicked out of the Evangelical Covenant Church for the same reasons.

One of the biggest fears I heard from leaders at World Vision and in the Evangelical Covenant Church was that we had to tread lightly on "gay issues" because big-money donors from the conservative right would lash out. Mentors of mine would quietly encourage gay inclusion while publicly disappearing or disavowing when it mattered -- in effect, siding with religious extremists like Franklin Graham.

Because when it comes to matters of inclusion, we know well that silence equals death.

And medieval-like torture of LGBT sisters and brothers in Africa confirm this.

One of the most disgusting parts of the World Vision fiasco was how many people held poor and hungry kids in great need hostage, because of an HR decision in Federal Way, WA.

In a matter of days, World Vision lost something like 3,500 child-sponsors, donors who were committed to monthly giving to help struggling kids get the water, nutrition and opportunities they deserved. As World Vision donors were abandoning their children, others however, organized to stand strong and bridge the gap  --  to no avail.

What's interesting is that around the world, World Vision is more progressive on such matters  - - World Vision Australia and Canada do not discriminate against hiring LGBT employees. You could say this is a particularly American conflict. But I believe it is a global problem that leaves even more lives hanging in the balance.

This is how Time reported the story:

World Vision President Richard Stearns told Christianity Today that the board's initial decision to open hiring to gay and lesbian spouses was an effort to promote unity as some of the denominations represented by its members have begun performing and accepting same-sex marriages. But the organization's decision on the issue had the opposite effect.

In the aftermath, Rich Stearns formed an advisory council including John Ortberg (pastor of Menlo Park Presbyterian -- who helped create a new denomination over LGBT exclusionary matters), Gary Walter (President of the Evangelical Covenant Church --  who always knew my intentions to plant an inclusive church only to stand silent as we were kicked out), Alec Hill of Intervarsity (who publicly lobbied Christians to pray against inclusion and the California State University System) and Jim Daly of the anti-LGBT parachurch group Focus on the Family.

Instead of uniting the church they sided with one side -- and one side only: exclusion.

World Vision, in their reversal, did not simply fall short of uniting the church --  they fired the first shots of what has become a devastating and total civil war.

If World Vision would not have kowtowed to extremist, exclusionary forces, they could have demonstrated the Christian leadership that is sorely missing these days.

If World Vision would have stuck to its original inclusive plans, my situation in the Covenant church could have played out very differently. A generous, much-needed space would have opened up to lean into what unites us as people of faith rather than what divides us.

Instead, World Vision contributed to elevating LGBT exclusion to the highest doctrinal matters of faith --  on par with the resurrection of Christ, the work of the Holy Spirit and the inspiration of the Bible. And that kind of so-called orthodoxy is more committed to patrolling the borders of who is in and out rather than what is most important matters: serving the poor, the marginalized and the outcast.

Some might say the lives of thousands of at-risk kids were at stake. I would say that is false. The power of privileged, hetero white men was at stake.

There was a God-sized moment for broader unity and inclusion -- bringing together Christians of various convictions on LGBT matters to learn how to minister alongside one another rather than divide. World Vision missed an incredible opportunity, as a unifying organization, to bridge the gap for an untold amount of Christian colleges, seminaries, denominations and other NGOs.
Imagine what would have could have happened if World Vision stuck to their original decision -- what may have been possible in these places?

I shudder to think at the missed opportunity.

As our church was getting kicked out for LGBT inclusion, others were losing thousands of congregants and millions of dollars for their stance. Great churches like East Lake outside Seattle and GracePointe outside Nashville became the new leaders a younger, growing movement for evangelical inclusion was looking for.

Julie Rodgers was forced out as a chaplain at Wheaton College -- and has lived to tell her story.

My friend Brandan Robertson lost a book deal once he came out -- he now is one of the leaders on the front lines for inclusion.

Marriage equality passed -- with many younger evangelicals organizing to celebrate its passage.

At Christ Church: Portland, where I serve -- we miraculously survived after losing two years of promised funding and support. I was recently moved to tears when I saw a band of a dozen new LGBT friends -- young men and women of faith who had stayed behind for thirty minutes after worship laughing in the pews, deepening friendships and bonds for service. Knowing just glimpses of their stories over hours of coffee conversations, I know the resurrection hope of finding a community where they can truly be and belong.

Resurrection hope -- that's what Easter is all about.

You cannot get to Jesus' mysterious return without sitting shiva in the death on Saturday.

A death, some 2000 years ago where those closest to Jesus scattered and ran for the hills.
After Jesus died on that terrible Friday, he was buried by two near-strangers, a man named Joseph from Arimathea and another named Nicodemus. These weren't his closest friends -- these were men who secretly followed Jesus. But they were there publicly to tend to his corpse -- to ensure he got the dignity he deserved in death.

The male leaders around Jesus were nowhere to be found. In fact, they were terrified. Some of them holed up in a sort of safe house. Others fled.

But women like Mary Magdalene, Salome, and another woman named Mary were the courageous first ones at the tomb the next day to tend to Christ's body. Women in these early faith communities were always included in the good news and work of Jesus -- it would be later tradition to deride them as "prostitutes" and women of ill-repute.

Mary Magdalene -- known as Maryum to Jesus -- was actually one of Jesus' closest friends and one of the women who helped fund his ministry those years in the Galilean countryside. She was the first to tell the good news that Jesus was alive and had overcome death.

Mary Magdalene -- a marginalized person in the church's life and story was, in fact at the center, -- the world's first evangelist.

The Easter story is fiercely about inclusion -- truly the life worth living over death.

One day the church will open their eyes and hearts and believe.

Until then, we have work to do -- serving the hurting, working alongside the poor to end senseless suffering, and simply being the church we were always called to be.